The Green Bay Packers have said goodbye to some players who made key contributions during the 2021 season. Starters like Davante Adams, Billy Turner and Marquez Valdes-Scantling and other key players like Za’Darius Smith, Chandon Sullivan and Lucas Patrick will all not be Packers in 2022.

While the draft will bring in new talent, the Packers are looking for some returning players to take a step forward in their development and help the team improve. These are generally young players who the team hopes are ready to assume bigger roles this season as they adjust to life in the NFL and get more comfortable with the pro game.

Injured veterans like David Bakhtiari and Jaire Alexander are not included in this list although their return should also help the team improve.

Here is a look at five returning Packers players the team is hoping will take a step forward in 2022 and make a bigger contribution to the team’s success:

The Packers selected Newman in the fourth round of the 2021 NFL Draft and the former Ole Miss star played in all 17 games as a rookie, starting 16 of them. He slotted in at right guard and played 97 percent of the Packers offensive snaps.

Newman struggled at times throughout the first half of the season. He graded out higher as a pass blocker than a run blocker according to Pro Football Focus. To improve his run blocking, Newman will need to work in the weight room this offseason and get stronger.

The biggest problem Newman had in pass protection was picking up stunts and blitzes which is hardly surprising for a rookie. He did improve at this as the season continued and as he got more comfortable with his role in the offense.

Newman and Jon Runyan Jr. will likely start the season at guard and one of them may be benched if Elgton Jenkins returns midseason and plays guard rather than tackle. A step forward by Newman could solidify him as a starter for the Packers for years to come and improve the Packers offensive line.

Deguara is going into his third season after the Packers drafted him in the third round in 2020, but he only played two games in his first season before an injury ended his rookie campaign.

In 2021, Deguara recovered from the knee injury and took over as the Packers primary pass catching tight end after Robert Tonyan was injured midseason. Deguara caught 25 passes for 245 yards and two touchdowns including a 62-yarder in the season finale in Detroit.

While Deguara did not establish himself as a downfield threat, he did have a catch percentage of 75.8 according to pro-football-reference.com as he caught 25 passes on 33 targets.

If Deguara can take the next step forward and gain more of Aaron Rodgers’ trust, he can provide the Packers with another weapon at tight end.

The Packers are still unsure when Robert Tonyan will be ready to play and how much he can contribute coming off his knee injury. Tonyan is also on a one-year deal which gives Deguara a chance to assume a bigger role in 2022 and beyond with a strong step forward this season.

The Packers drafted Amari Rodgers in the third round of the 2021 NFL Draft and he was expected to eventually become the team’s new slot receiver. But his opportunities to play on offense were limited when Aaron Rodgers asked the team to trade for Randall Cobb.

The Packers are hoping for more from the former Clemson star in his second season. He has one year of NFL experience under his belt and had the chance to learn from Cobb in 2021.

With the Packers receiving corps undergoing significant changes, Amari Rodgers stepping up would give the Packers another badly-needed weapon this season.

Nijman had been a developmental tackle for two seasons before he was pressed into action due to injuries along the offensive line last year. The former Virginia Tech star started eight games at left tackle in 2021 and did a respectable job.

Nijman needed help from tight ends and running backs at first, but gradually the coaching staff gained more confidence in his ability to protect the quarterback.

According to PFF, Nijman graded out as a better pass blocker than run blocker. He has ideal size at 6’7” and 314 pounds. If he can take a step forward this season, Nijman may find himself with a chance to win a starting job at right tackle after the departure of Billy Turner and with Elgton Jenkins not expected to be ready to start the season as he recovers from knee surgery.

If Nijman takes a step forward, he could become a starter. If not, he is likely going to be a career backup and fill-in.

The Packers selected T.J. Slaton in the fifth round in 2021 and the 24-year-old rookie managed to play in all 17 games after showing promise in the preseason.

The former Florida star had 23 total tackles, one sack and two quarterback hits while playing 24 percent of the Packers defensive snaps. He was a part of the team’s defensive rotation but did not start a game.

Slaton stands 6’4” and weighs 330 pounds. His size and quickness make him tough to move and allows him to occasionally gain penetration into the opposing team’s backfield.

The coaching staff indicated earlier this week they envision Slaton as a potentially strong run stuffer in the middle of that line. When you consider that the Packers allowed an average of 4.7-yards per rushing play last season, a step forward by Slaton would be a big benefit to Joe Barry’s defense. 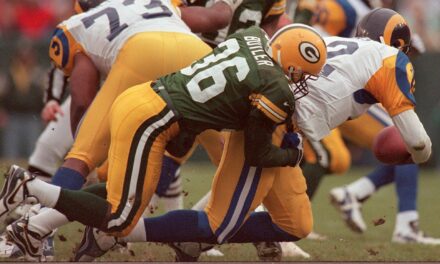