The 2022 NFL Draft is over and the Green Bay Packers have added 11 new players selected over three days. GM Brian Gutekunst believes he has improved his roster on both sides of the ball.

While we won’t know how good this draft ultimately is for at least two or three more years, here are five reasons to like the Packers 2022 draft class as of right now.

Everybody expected the Packers to select a wide receiver with at least one of their two first round selections but they surprised everybody by adding linebacker Quay Walker with the 22nd overall pick and interior defensive lineman Devonte Wyatt with the 28th selection.

Both these positions have been long-term needs for the Packers and areas that they have not prioritized in recent years.

At inside linebacker, the Packers have long been trying to use mid-round draft picks (like Blake Martinez) or inexpensive free agents or trade acquisitions (B.J. Goodson, Christian Kirksey and Antonio Morrison come to mind) to fill holes without much success.

Last year, they hit the jackpot with an inexpensive free agent in De’Vondre Campbell and now they have drafted Walker.

Meanwhile, the Packers defensive line has long been considered a weak link on the team with just Kenny Clark playing at a consistently high level. Since adding Clark in the first round of the 2016 NFL Draft, the only player on the defensive line the Packers have selected in the first three rounds was Montravius Adams who they took in the third round in 2017. Adams never lived up to his potential in Green Bay.

But this year, Gutekunst addressed both of those problem areas, adding Walker at ILB to eventually compliment Campbell and Wyatt at IDL to eventually take some of the pressure off Clark up front.

If these two players help address the team’s ability to stop the run and get pressure on opposing quarterbacks from the interior of the line, the defense could be improved for years to come.

While the Packers didn’t use either of their two first-round picks on a wide receiver, Gutekunst did address the position and added three wideouts before the draft ended.

He traded up in the second round to grab Christian Watson with the 34th overall pick. Many scouts gave Watson a first-round grade and he possesses outstanding athletic ability.

Watson is 6’4” and 208 pounds and he ran the 40-yard dash in 4.36 seconds. He is a deep threat who has the potential to become a number one receiver if he receives the proper coaching and is given a little time to make the jump from North Dakota State to the NFL.

In the fourth round, the Packers drafted Romeo Doubs from Nevada. He is also a player who can stretch a defense and catch deep passes.

Then in the seventh round, Gutekunst took a flier on Samori Toure of Nebraska who led the Big 10 in yards per reception.

Most rookie receivers do not make a big impact in their first NFL season but the Packers added speed and some depth here with the potential to create a strong receiving corps when these players start to reach their potential.

While we don’t know how or even if all these picks will contribute, many of the players the Packers selected in this draft can make contributions on special teams.

Both Watkins and Doubs have experience as return specialists, an area the Packers needed to upgrade especially after Kylin Hill’s injury and Amari Rodgers’ inconsistency.

Hopefully, this attempt to address the special teams units and the addition of new special teams coordinator Rich Bisaccia will help the Packers turn around a unit that has been a weak spot for far too long and cost the team a chance to advance to last year’s NFC Championship Game.

For most of this draft, the Packers got good value according to most draft experts. Watson was considered a first-round talent by many scouts and in fact, Gutekunst tried to trade up to select him with the final pick in the first round but the Vikings said no.

Players like Enagbare, Sean Rhyan and Rasheed Walker were also expected to go earlier in the draft than the Packers selected them in.

Overall, the Packers were able to get good value in this draft, especially on day three.

Entering the draft, the Packers needed to fortify the depth and talent at wide receiver, edge rusher, the offensive and defensive lines and safety. The team addressed all those areas during the draft, sometimes with multiple picks.

The only position discussed as a need that the team didn’t address at all in the draft was tight end and that is more of a need for 2023 than it is for 2022.

Gutekunst was able to at least add players to improve the depth and talent level of the most needed areas on this team.

Draft classes are notoriously difficult to grade right away. Injuries, coaching decisions and chemistry can change any draft class and make it better or worse than expected. But at this early juncture, there are reasons to be happy with the Packers draft class of 2022. 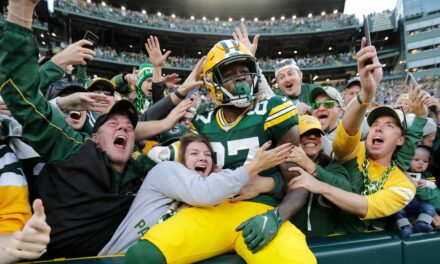