The Green Bay Packers released their first “unofficial” depth chart at the beginning of this week, giving fans a first peak at the way the coaching staff views the team as of this point in training camp.

The depth chart gives us insight into where the position battles stand as the team prepares to play the first of three preseason games this Friday in San Francisco. Obviously, players on the PUP list are not on the present depth chart so David Bakhtiari, Elgton Jenkins and Christian Watson, for example, do not appear here.

Here are five things we learned from the Packers initial depth chart of 2022:

While the Packers selected Devonte Wyatt in the first round of this year’s NFL Draft, Wyatt is presently listed as second string along the defensive line along with T.J. Slaton and Jack Heflin.

Wyatt may need some more time to earn a bigger role in the defensive line rotation and his play in the preseason will let us know how much time he needs to learn the defense and adjust to life in the NFL.

The Packers list three wide receivers as starters on the depth chart but veterans are presently filling all three spots. Allen Lazard and Sammy Watkins are the two starters on the outside with Randall Cobb filling in as the slot receiver.

Amari Rodgers backs up Cobb in the slot while Juwann Winfree and training camp standout Romeo Doubs are listed as second string.

That will almost certainly change when second-round pick Christian Watson is able to return to practice. Obviously, Watson is missing some valuable reps and his ability to contribute early in the season may be further compromised by this injury.

We all know Rashan Gary and Preston Smith are the starting edge rushers but the battle for the backup spots remains wide open with no proven players currently on the roster.

As of right now, last year’s top backups, Tipa Galeai and Jonathan Garvin are listed as second string along with Randy Ramsey.

Hamilton and Enagbare still have more to prove before they can lock down the primary backup spots in this rotation.

We have seen the Packers coaching staff mixing and matching potential players along the offensive line with both Jenkins and Bakhtiari still on the PUP list and unable to practice.

The biggest surprise here is Hanson who was only played six offensive snaps last season. He was drafted as a center but is now getting an extensive look at guard. He appears to be in line to be the next interior line swing man when the two injured tackles return, taking over the role Lucas Patrick played the last few seasons.

Because many of these players can fill in at multiple spots along the line, this depth chart is not so straightforward but it does give us an idea of where some of the candidates stand as we enter the preseason.

While Devonte Wyatt has yet to crack the first team on the initial depth chart, fellow first-round pick Quay Walker is listed as a starter. He joins De’Vondre Campbell on the first string with Isaiah McDuffie and last year’s starter Krys Barnes presently listed as second stringers.

Ray Wilborn, Ellis Brooks and Ty Summers are the third stringers and will be in a fight to make the roster. Special teams may determine who makes the roster.

Meanwhile, Walker has looked quick and decisive opposite Campbell in training camp so far. 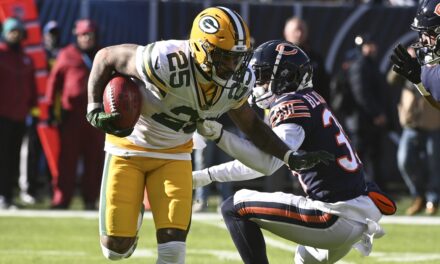