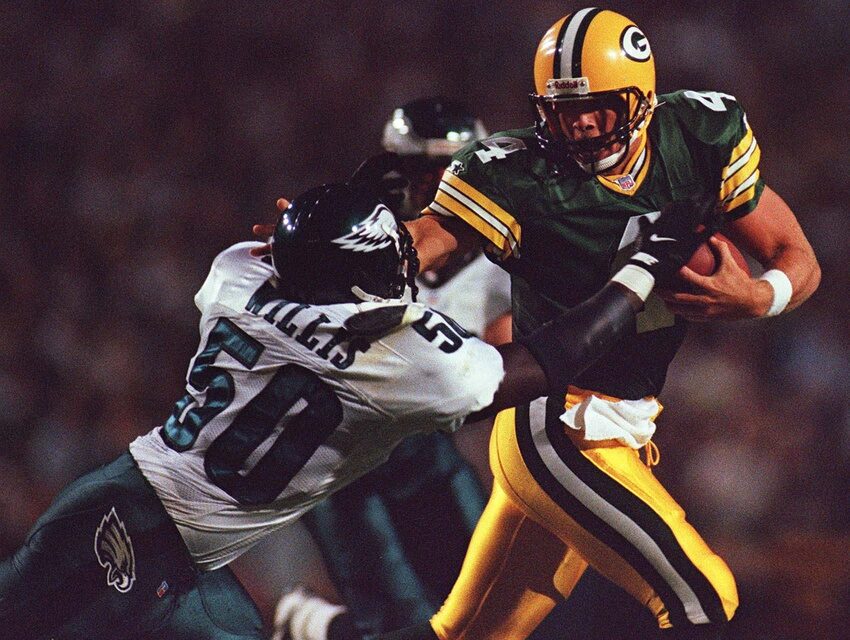 Brett Favre threw for three touchdowns and the Green Bay Packers defense forced four turnovers as the Pack crushed the Philadelphia Eagles 39-13 on Monday Night Football. It was the home opener of the 1996 season for the Packers who took control of the game in the first half and never let the Eagles get back into the game.

By halftime, the Packers led the game 30-7. “We probably could have scored 50 points tonight,” Favre said.

The crowd at Lambeau Field realized the Packers had the potential to be a dominant team this season. Thus far, they had outscored their opponents 73-16. Favre had thrown seven touchdowns without an interception in the team’s first two contests.

Favre started the game by throwing five straight incomplete passes. “I was a little excited in the beginning, but after a couple of incompletions, I settled down and got back to reality,” Favre said.

He finished the game by completing 17-of-31 passes for 261 yards and the three scores. Wide receiver Robert Brooks caught five passes for 130 yards and two touchdowns while Edgar Bennett added 93 yards rushing in 17 carries while catching five passes for 49 more yards and a score.

The Eagles played a lot of nickel and dime defenses to try to slow the Packers passing game, so head coach Mike Holmgren added a steady dose of runs. As a team, the Packers ran the ball 38 times for 171 yards, good for a healthy 4.5-yards per carry. In addition to Bennett’s strong showing, fullback William Henderson had a then career-high 40 yards on just six carries. He also blocked extremely well for Bennett throughout the game.

The Packers forced four turnovers in the first half and converted each of them into points. That made the game a one-sided contest.

Later in the opening quarter, Eagles running back Ricky Watters fumbled and linebacker Brian Williams recovered at the Green Bay 45. Five plays later, Favre found Brooks on a 25-yard scoring play and the Pack had a 10-0 lead.

Two plays after the Eagles got the ball back, linebacker George Koonce picked off a Peete pass that set up another field goal by Jacke to make it 13-0 Packers on the first play of the second quarter.

Favre engineered a six-play 77-yard drive the next time the Packers had the ball. Key plays included a 38-yard toss to Brooks and runs of 16 and 11 yards by Bennett. Dorsey Levens scored on a one yard run and the Packers led 20-0.

The Packers increased their lead to 23-0 on a 38-yard field goal set up by a 33-yard pass from Favre to Brooks but the Eagles answered on a one yard TD run by Watters to make the score 23-7 with two minutes left in the half. The touchdown was set up by some Eagles trickery as Peete threw a 29-yard completion to Chris Jones who lateraled to Irving Fryer who gained another 33 yards.

But Favre ran an effective two-minute drill, throwing to tight end Mark Chmura for a key first down and later connecting with his other tight end, Keith Jackson for 18 yards and then finding Antonio Freeman for 21. That set up Brooks’ second touchdown grab of the game, a 20-yard strike down the right side. The Packers had a 30-7 halftime lead.

The four turnovers were the biggest difference in the game. Corey Dowden intercepted Peete to give the Packers three picks in the game and in the fourth quarter, Peete was replaced by former Packers quarterback Ty Detmer.

“That’s all we’ve been talking about since the start of training camp is turnovers,” Packers defensive end Reggie White said after the game. “Last year, the guys on offense were putting points on the board without us putting them in the position to score. We knew if we could put them in a better position this year, they could score a lot more points.”

The second half saw the Packers extend their lead. Favre found Bennett for a 25-yard touchdown pass in the third quarter to make it a 37-7 game and then White and Santana Dotson sacked Peete in the end zone for a safety in the fourth quarter. A late touchdown run by Charlie Garner of the Eagles made the score a little more respectable.

The Packers, who had reached the NFC Championship Game the previous season before losing to Dallas, wanted to prove to the league they were going to be an elite team in 1996.

“We just wanted to go out and show everyone that we were going to be a contender this year,” Evans said after the game. “Now we have to go out each and every week and prove the same thing over and over again. But people will look at this game and say, ‘Hey, the Packers are pretty damn good.’”

The Packers did prove how good they were that season, finishing 13-3 and winning their first Super Bowl in nearly three decades.