Brett Favre passed Dan Marino to become the NFL’s all-time touchdown pass leader as he led the Packers to a 23-16 win over the Vikings in Minnesota. The record breaker was a 16-yard pass to wide receiver Greg Jennings which gave Favre 421 career touchdown passes, the most in NFL history at that time.

Favre finished the game by completing 32-of-45 passes for 344 yards and two touchdowns in a game that saw the Packers running game limited to 46 yards on 20 carries. This was the 50th 300-plus yard game in Favre’s career.

The record came with 4:56 left in the first quarter and it gave the Packers an early 7-0 lead. After Jennings caught the pass, Favre ran into the end zone and lifted his receiver up on his left shoulder.

The ball was quickly secured by game officials and was sent directly to the Pro Football Hall of Fame in Canton, Ohio.

“It feels great but I’ve never considered myself as good a quarterback as Dan Marino,” Favre told the Washington Post after the game. “Dan was a hero of mine. To be mentioned in the same breath as Dan and other guys really makes it special.”

Marino had a taped statement that was played on the scoreboard. He said, “I loved holding the touchdown record for the past 13 years. But if someone was going to break it, I’m glad it was someone like you, who has always competed at the highest level and always played to win.”

The Packers never trailed in this game. Both defenses held in the red zone and forced their opponents to kick a lot of field goals. Both Green Bay’s Mason Crosby and Minnesota’s Ryan Longwell kicked three field goals each. The Packers took control on Favre’s second touchdown toss of the day, a 33-yard dart to James Jones in the fourth quarter that put the Packers ahead 23-9.

Atari Bigby clinched the win with an interception with 1:06 left in the fourth quarter to snuff out the Vikings last attempt to tie the game. Charles Woodson tipped the ball to Bigby and the Packers were able to run out the clock.

Woodson knew his teammates were not going to let Favre break the record in a loss. “This is the way it’s supposed to be,” Woodson said after the game. “Brett, he don’t say too much. He’ll say a couple words, and then get ready for work. The thing about it is, everybody believes he’s really interested in winning. If you play the game and do what he’s done, records are going to fall. But he came back for a reason, and that’s to win football games.”

“I’m so glad we won the game,” Favre said. “There was so much emphasis on this record and not the game itself. Everyone’s like, ‘What are you going to do? Are you going to have a big celebration?’ Put yourself in my shoes. I want to help this team win. I do not want us to get blindsided by this record and what we’re actually here for.”

Defensive tackle Johnny Jolly added, “He’s looking for better things for the team and I honestly believe he feels that way. He loves us and we love him and we want to continue to get him wins.”

This win improved the Packers record to 4-0 on the young season while the Vikings dropped to 1-3. The team would finish 2007 with a 13-3 record and reached the NFC Championship Game where they fell to the New York Giants in overtime. It would be Favre’s last season in Green Bay.

Favre finished his NFL career with 508 touchdown passes, which was the most in league history at the time of his retirement. He is now fourth in league history behind Tom Brady, Drew Brees and Peyton Manning. Aaron Rodgers is fifth all-time with 445.

This was a magic moment for Favre and the Packers, one of the last great moments in his Packers career. 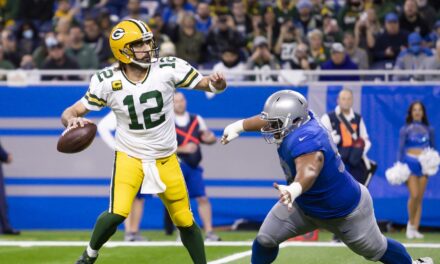