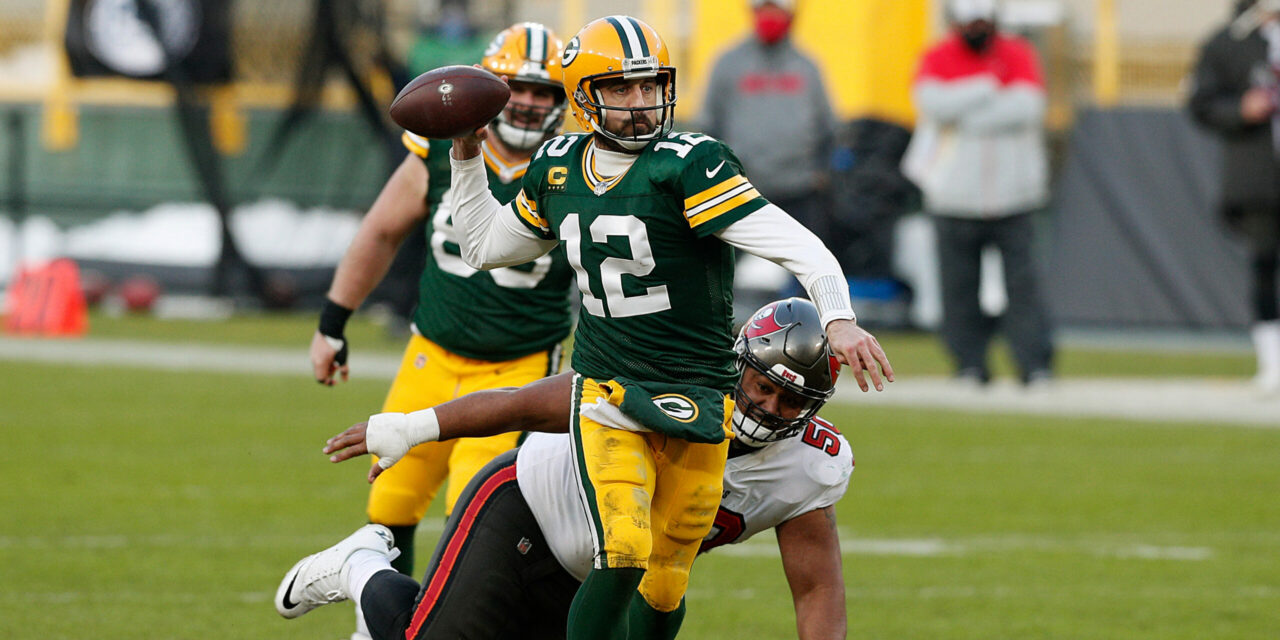 Aaron Rodgers overcame a bad case of the flu and strained calf muscle he suffered in the first quarter to lead the Packers to a 20-3 win over the Tampa Bay Buccaneers in Tampa. The Packers defense was outstanding as well, limiting the Tampa Bay offense to just 109 total yards and six first downs while sacking Bucs quarterbacks seven times.

Rodgers suffered the calf injury on the second offensive series and the game still scoreless. It limited his mobility but the eventual league MVP was able to remain effective and completed 31-of-40 passes for 318 yards and a touchdown.

Randall Cobb was the Packers top receiver in the game, catching 11 passes for 131 yards while Jordy Nelson caught nine balls for 113 yards and a one-yard touchdown pass from Rodgers in the fourth quarter that put the game away.

“I’ve obviously been with Aaron the whole time. You see him do things on the football field, as far as making plays and this and that. I think the last couple of days, you see the kind of warrior he is,” Packers head coach Mike McCarthy told reporters after the game. “He battled whatever illness he’s had the last couple of days and then goes out and strains his calf the first or second series. He didn’t want to come out. … Really a gritty performance by Aaron.”

Rodgers was able to play despite the injury. “I hurt my calf pretty good, but the training staff helped me kind of get through it,” Rodgers explained. “It got really tight about halftime. Came in and got a little treatment, it loosened up just a tad, but it was still pretty tight. … I was able to move in short segments in the pocket, which was all I needed to do today.”

The Packers took the lead in the last minute of the first quarter on a 44-yard touchdown run by Eddie Lacy. The big back broke a tackle at the line of scrimmage and then never looked back. Lacy finished the game with 99 yards rushing on 17 carries. That put him over 1,000 yards for the second straight season.

The Packers began to move the ball after the Lacy touchdown run but Mason Crosby missed a field goal try on the next drive before hitting from 42 yards out on the following possession to make it 10-0 Green Bay with 4:55 left in the second quarter.

The Bucs got on the board on the final play of the first half when Patrick Murray hit a 43-yard field goal. It was set up by a 40-yard pass from Josh McCown to Vincent Jackson. But that was all the points the Packers defense would allow for the rest of the game.

The defense controlled the game in the second half, holding the Bucs in check and harassing McCown every time he dropped back to pass. Clay Matthews led the way with 2.5 sacks followed by Julius Peppers who added two more.

The Bucs couldn’t run the ball either, gaining just 16 yards on 14 carries as a team. The Packers forced five straight three-and-outs to start the game and Datone Jones added an interception in the fourth quarter that allowed the Packers to run out the clock in the final two minutes of the game.

“It started and ended with defense today, just the constant pressure, the seven sacks,” McCarthy said after the game. “Really, they controlled the game for us.”

“It was a great effort by the front, the D-line and the linebackers,” Peppers added. “Everybody got involved. It’s something that we emphasized and stressed this week was to be able to get pressure on this team. It worked out and hopefully we can build on it and carry it into the playoffs.”

The win improved the Packers record on the season to 11-4 and clinched a playoff berth for the sixth straight season. They were tied with the Lions for first place in the NFC North and would close out the regular season at home against Detroit with the winner clinching the division title. The Packers downed Detroit 30-20 as Rodgers threw for two touchdowns and ran for a third.