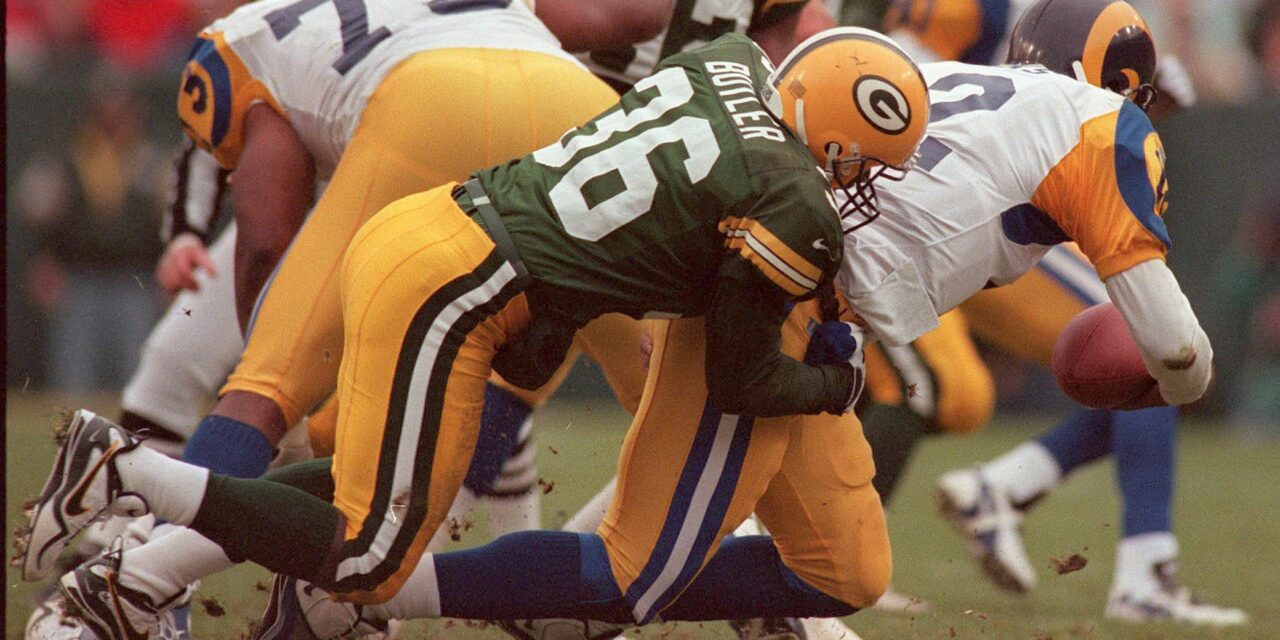 On Saturday, former Green Bay Packers safety LeRoy Butler will be inducted into the Pro Football Hall of Fame. This is a long overdue honor for a player who was one of the best in the game and who changed the way his position was played. Butler overcame a difficult childhood and ended up as an All Pro, a Super Bowl champion and now one of the game’s all-time greats.

When he was a child, it looked unlikely that Butler would be able to become a pro athlete. He had a bone condition that made it tough for him to walk and he spent time in a wheelchair and wore leg braces when he was young.

But he overcame those early difficulties and attended Florida State before the Packers selected him in the second round of the 1990 NFL Draft. Butler initially played cornerback for the Packers and intercepted three passes in a backup role as a rookie. One year later, he started all 16 games at cornerback and intercepted three more passes while recovering one fumble.

In 1992, the Packers drafted Terrell Buckley in the first round to play corner so Butler was moved to strong safety. The arrival of GM Ron Wolf, head coach Mike Holmgren and quarterback Brett Favre helped turn the team around and they improved from 4-12 in 1991 to 9-7 in 1992.

“LeRoy was the quintessential safety,” former Wolf said. “He could do everything you needed a safety to do — he could play at the line of scrimmage, he could tackle, he could cover man to man, he could dog [blitz]. He had no weakness.”

Butler gives credit to defensive coordinator Fritz Shurmur for helping him realize his potential at safety. “When Fritz came in — this is why I love him — he didn’t come in like the smartest guy in the room. He said, ‘I’ve got a guy on the cusp of being a very good player, I’m going to let him do his thing, but he has to accept coaching.’ He took me to the next level. Fritz was everything. He was the first coach to ever ask me, ‘What do you think?’ I loved that.”

Late in the season, Butler also made history when he performed the very first Lambeau Leap. It came on a frigid December day at Lambeau Field in the Packers 28-0 playoff-clinching win over the Los Angeles Raiders. Butler made a jarring tackle to force a fumble that was picked up by White. Before White was going to be tackled, he lateraled the ball to Butler who ran it in 25 yards for the game-clinching touchdown. After scoring, Butler jumped into the stands to celebrate. The tradition continues to this day.

Former teammate Gilbert Brown recalled the moment and thinking, “’LeRoy, where he going? He’s about to do what?’ Then, he jumped in the stands. It’s Green Bay. We’re the team that the fans get close to. LeRoy took it to another notch.”

“That was my way of loving the fans,” Butler said. “It was so impactful. We’re the only team that can say that not only do we love our fans on paper, but we love them in person, as well. And that’s what the ‘Leap’ stands for.”

As a safety, Butler could do it all. He could play in the box and stuff the run. Because he was a former cornerback, he was strong in coverage and he was dangerous when he was called on to execute the safety blitz. He finished his career with 38 interceptions and 20.5 sacks, making him the first defensive back in NFL history to record more than 20 interceptions and 20 sacks in his career.

Butler was also a clutch player. He recorded a sack in the Packers win over the New England Patriots in Super Bowl XXXI and had three sacks and an interception in the playoffs. He also provided the defense with leadership and changed the way the safety position was played.

Butler was named to the NFL’s All-Decade Team of the 1990s and now has finally been named to the Pro Football Hall of Fame. He joins Wolf, Favre and White as members of the 1996 Packers in the Hall. Head coach Mike Holmgren is now a senior finalist for next year’s class.

Current Packers quarterback and future Hall of Famer Aaron Rodgers was emotional when he found out Butler was going into Canton. “I was so excited … just to see that look in his eye was really, really special,” Rodgers recalled. “He fit the criteria. He was a top-three player at his position for an extended period of time, and it’s probably long overdue but I’m really excited that he’s finally going in the Hall of Fame.”

It’s a long overdue honor for Butler, but one he has definitely earned. Congratulations LeRoy.