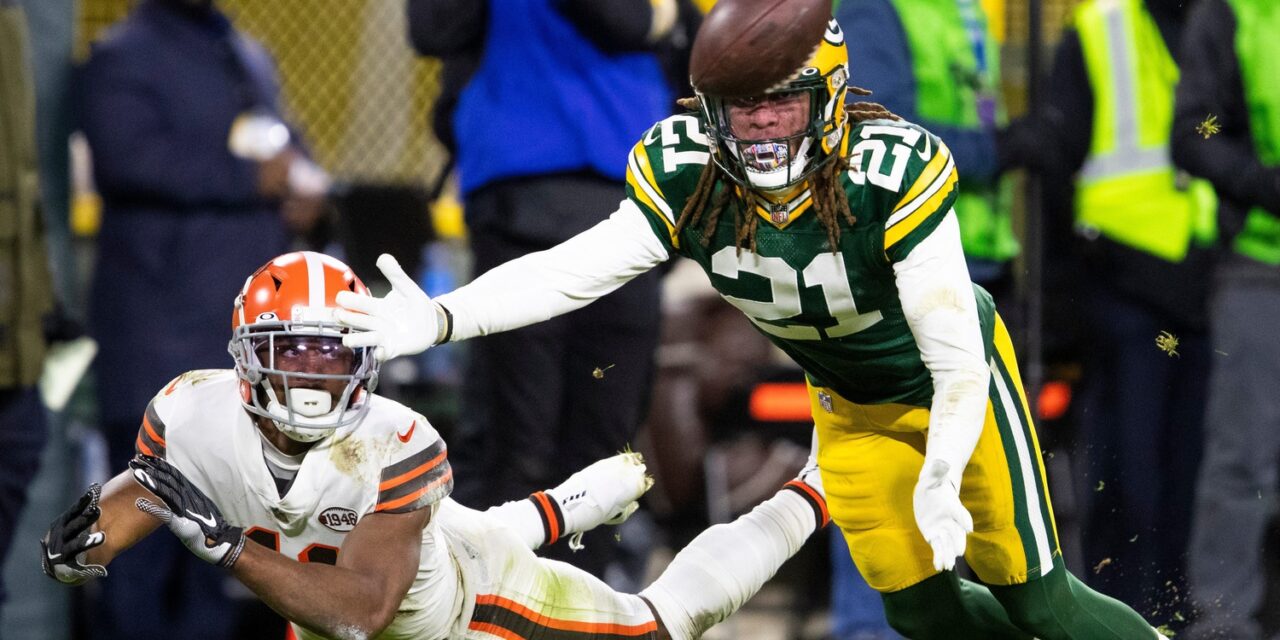 The Green Bay Packers have been a team that primarily builds through the draft. GM Brian Gutekunst has signed some free agents, most notably when he added four starters before the 2019 season, but the Packers emphasize the importance of drafting the core of their roster.

The team’s class of 2021 got off to a solid start in their first campaign, but this season, many of the players have had a tougher time in their second NFL season.

While you cannot fully evaluate an NFL Draft until after at least three seasons, here is a look at where the Packers 2021 draft class stands as we head into the final six games of the 2022 campaign.

Grades are based on a mix of expectations and performance. Obviously, the earlier a player was drafted, the higher their expectations are so a fifth round pick that has an identical performance as a second rounder will receive a higher grade.

Stokes was a great story last year. The Georgia alum was thrust into the starting lineup early in the season when first Kevin King and then Jaire Alexander went down with injuries. He ended up earning All-Rookie Team honors for his strong play.

Although he had only one interception, Stokes used his outstanding speed to hold opposing quarterbacks to an impressive 49.5 percent completion percentage when throwing to receivers covered by Stokes according to pro-football-reference.com. Their quarterback rating was a mere 71.3.

But this year, Stokes’ inability to track the ball in the air and the overall issues surrounding the secondary and how they pass players off to one another in zone coverage have hurt his performance. This season, opponents completed 80 percent of their passes when throwing to receivers covered by Stokes and had a quarterback rating of 123.5.

Stokes suffered knee and ankle injuries in the Packers loss to the Lions and is not expected to play again this season. He is currently on the injured reserve.

After one season, Stokes looked like an outstanding pick. He now faces a rehab from his injury and his career will be at a crossroads when he starts his third NFL season next year.

Injuries limited Myers to just six games in his rookie year although he did start all the contests he appeared in. Thus far in 2022, Myers has started all 11 games for the Packers.

Myers has graded out as a good pass blocker but average at best as a run blocker. He needs to get a bit stronger to be better at opening holes for the running game.

The former Ohio State star has been a solid starter when healthy but has not been as good as Creed Humphrey who the Chiefs took with the pick immediately after the Packers took Myers.

Amari Rodgers never panned out for the Packers. His chances of contributing on offense were reduced when the Packers reacquired veteran Randall Cobb after the draft at the behest of Aaron Rodgers.

The former Clemson star caught only four passes for 45 yards as a rookie. This season, he caught another four passes for 50 yards. He barely saw the field as a receiver either season and never earned the trust of his quarterback. Even when the Packers offense had multiple injuries at the position, Amari Rodgers never earned a significant role on offense.

Amari Rodgers’ primary role was as a punt returner. Unfortunately, he struggled there as well, fumbling seven times in less than two seasons and showing indecisiveness as to when to catch the ball and when to make a fair catch. When he did field the ball, he was hesitant to head up field and get the yardage that was available to him.

The Packers released Rodgers earlier this month and he was signed by the Houston Texans. Rodgers never panned out as a Packer.

Newman started 16 games at right guard as a rookie and graded out as a better run blocker than pass blocker. The former Mississippi star struggled with stunts and blitz pickups which is not unusual for an inexperienced lineman, although he didn’t show much improvement over the course of the season.

This season, Newman started one game at tackle and then the next five at guard but continued to struggle with blitzes and stunts. Too often, the player Newman was supposed to block got pressures, quarterback hits or even sacks.

The Packers benched Newman after the loss to the New York Jets and he has played only one offensive snap since then, seeing action only on special teams. Rookie Zach Tom has passed Newman on the depth chart.

Slaton was projected as a run stuffer but has graded out as average as both a pass rusher and run stopper. He has one career sack and two career quarterback hits with all of them coming in his rookie campaign.

Slaton has been a secondary contributor which is about what you expect from a fifth-round pick. The question is whether he can earn a bigger role in the future.

Thus far, Jean-Charles’ main contributions have come on special teams. In 20 games, he has yet to start one. Injuries have limited him to just six games this season and he has played just three defensive snaps.

Van Lanen played one offensive snap with the Packers as a rookie before being traded to the Jaguars for a seventh round pick during training camp this season. He has seen only a handful of snaps on offense for Jacksonville with most of his action coming on special teams.

McDuffie was a special teams contributor in his first season but when injuries hit at inside linebacker this year, he has taken a larger role on defense. He has played 20 percent of the team’s defensive snaps this season including his first NFL stat.

The former Boston College star had a career-high 12 tackles against the Cowboys in Week 10. Thus far, he has played the run better than the pass but he has done well on special teams and showed he is at least a capable backup on defense.

Hill started the 2021 season as the team’s primary kickoff returner and third string running back. He averaged 19.9-yards per kick return before suffering a season ending knee injury against the Cardinals.

He started this season on the PUP list but was activated for the Packers loss to the Lions in Week 9. After playing in two games and carrying once for seven yards, Hill was released by the team along with Amari Rodgers. Head coach Matt LaFleur hinted that Hill’s work ethic and attitude weren’t where they needed to be and was sending the team a message when Hill was let go.

Overall, most of the Packers 2021 draft class seemed to be doing better last year than this season. Of course, you can say that about nearly everyone on the Packers roster.