The Green Bay Packers have opened training camp. This is the last in a series of articles previewing the Packers position by position, analyzing the talent on the roster and discussing key questions that are facing the Packers as they begin preparation for the 2022 season.

Crosby started training camp on the PUP list after undergoing a minor scope of his right knee after OTAs. He is hopeful he’ll be ready to start the season and is doing “mental reps” to prepare for the season.

The Packers all-time leading scorer is looking to bounce back from a disappointing season that saw him miss nine field goals and two extra points. He struggled with his holder and long snapper throughout the season in 2021 and is hopeful he can return to form in his 16th season with the Packers.

Brkic will have an extended chance to show the coaching staff what he can do while Crosby is recovering from his injury.

The former Oklahoma star has a strong leg and five field goals of 50-or-more yards in his senior season in college.

Even if Brkic doesn’t win the kicking job, he could earn a spot on the practice squad and possibly could be the heir apparent when Crosby hangs up his cleats.

The former Bears punter was hand picked by special teams coordinator Rich Bisaccia. He may not have the leg strength of his predecessor, Corey Bojorquez, but he is more consistent than Bojorquez and is used to kicking in bad weather thanks to his time in Chicago.

O’Donnell should also be an upgrade as the team’s holder for extra points and field goals which was a big problem for the Packers in 2021.

Wirtel replaced Hunter Bradley at midseason but really wasn’t any more reliable than Bradley was. He also needs to improve as a blocker after he snaps the ball, especially on punts.

Coco snapped for field goals at Georgia Tech in his first three seasons there but only played tight end in 2021. He won the chance to compete with Wirtel at rookie camp.

He has a chance to win a job since Wirtel was nothing special last season but Coco must show he can snap for punts something he hasn’t done in a game since high school.

Both the kick return and punt return jobs are wide open. Kylin Hill was handling kick returns last year before his injury but he isn’t expected to be ready to start the regular season as he continues to rehab his knee injury. Hill may compete for the job again when he’s healthy.

The return jobs are wide open and should provide an interesting battle throughout training camp and the preseason.

Packers special teams units have ranked at or near the bottom of the league for a long time now in large part because the team didn’t place much emphasis on them.

Now, the Packers have brought in Bisaccia who has two decades of NFL experience running special teams. He has deemed them “We-fense” and has tried to restore some pride in the unit.

If the special teams unit can be average this season, it would be a big and welcome step forward for the organization that lost a playoff game last season in large part because of special teams failures.

Crosby had his worst season since 2012 but the Packers are confident that the veteran can return to form just like he did in 2013.

The Packers all-time leading scorer knows how to kick in the wind and cold of Lambeau Field late in the season, something that cannot be underestimated.

If Crosby returns to form, the Packers will have one less thing to worry about this year.

The Packers special teams units struggled to block on field goals and extra points, were far from strong when blocking for kick and punt returns and had a critical punt blocked in the playoff loss to San Francisco.

Bisaccia has been brought in to improve these shortcomings and the Packers hope his enthusiasm and attention to detail help in that regard.

The former Raiders interim head coach will also have more say in some of the final roster spots which should help improve the special teams units as well. 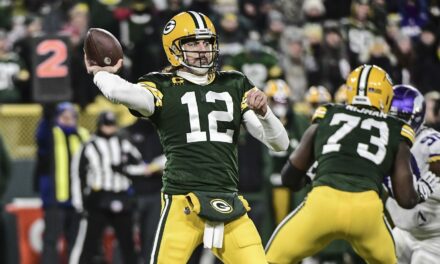