After the Green Bay Packers close out their preseason schedule in Kansas City, the team will have a few days before final cuts must be made and they get to their initial 53-man roster for the 2022 NFL season. The team is facing questions at nearly every position group as big decisions have to be made.

Here is a look at one question GM Brian Gutekunst must answer before final cuts are made next Tuesday:

Barring a serious injury, the team is set here. Aaron Rodgers will be the starter, Jordan Love the backup and Danny Etling will be on the practice squad as the third signal caller.

The top two spots are set with Aaron Jones and A.J. Dillon but the third spot remains up for grabs. Tyler Goodson, Patrick Taylor and Dexter Williams are battling for one roster spot and at least one spot on the practice squad.

Goodson has been the better runner and receiver during preseason while Taylor has exceled on special teams and is the better pass blocker. Williams has the most experience in the system and has looked good running the ball in limited preseason snaps.

Kylin Hill was placed on the regular season PUP list and will miss at least the first four games.

Five spots are mostly settled. Does the team keep six or seven wideouts on the initial roster and who gets the spots? Allen Lazard, Sammy Watkins, Randall Cobb, Christian Watson, Romeo Doubs and Amari Rodgers will make the roster.

If there’s a seventh receiver kept, it will be either veteran Juwann Winfree or rookie seventh round pick Samori Toure. Winfree is more consistent and dependable while Toure has more deep speed and upside. The team will likely keep two receivers on the practice squad.

Who gets the fourth tight end spot on the roster. Tyler Davis was the favorite but has struggled all preseason. Alize Mack is the other top candidate for the remaining spot. Since we are unsure about how much Robert Tonyan will be able to contribute early in the season as he returns from last year’s knee injury, Davis may have an edge as he is the better receiver of the group.

Does the team keep nine or 10 linemen? Who starts at right guard? Will Elgton Jenkins be ready to play in Week 1 and if so, where does he start? These are some of the pressing questions facing the offensive line. The Packers have depth here and another trade like the one that recently sent Cole Van Lanen to Jacksonville is possible. There are many questions here including whether Zach Tom or Royce Newman wins a starting role.

The Packers are set in the top five with Kenny Clark, Jarran Reed, T.J. Slaton, Dean Lowry and Devonte Wyatt all making the club. Do the Packers keep five or six players here? Do Chris Slayton or Jack Heflin make the team if they do? One or both could be headed for the practice squad if they don’t but both have flashed ability throughout camp and the first two preseason games.

The depth behind Preston Smith and Rashan Gary remains unsettled as five players battle for spots in the rotation and on the roster. Kingsley Enagbare, Jonathan Garvin and Tipa Galeai are the favorites to win the backup spots with Kobe Jones and La’Darius Hamilton also battling for roster spots.

Will Ty Summers make the roster? If he does, it would be on the strength of his play on special teams because both Isaiah McDuffie and Krys Barnes are ahead of him on the depth chart. The depth at inside linebacker seems stronger than it did at the beginning of camp but do they keep four or five at this position?

We know the top three but there are three more spots open and we don’t know who will fill them. Shemar-Jean Charles looks like he makes the roster and Kiondre Thomas has played well in the preseason. Keisean Nixon will likely make the roster because of his abilities on special teams. Rico Gafford was off to a good start in training camp but Thomas’ emergence means one man will have to be cut and the Packers will try to sneak them onto the practice squad.

There are big questions here behind starters Adrian Amos and Darnell Savage. Vernon Scott was waived with an injury designation and Dallin Leavitt has been hurt. Leavitt may make the team but he is predominantly a special teams contributor and could start the season on IR. Shawn Davis and Micah Abernathy are in the mix with both looking good at times during the preseason. There are two or three backup jobs available depending on how the Packers format the roster.

Will Mason Crosby be ready for Week 1? He says he thinks he will but is still on the PUP list as of right now. Ramiz Ahmed has looked good in limited chances in training camp but would the team be comfortable with him starting the season as the kicker?

The punt and kick return jobs are still up for grabs and kick and punt coverage teams still needs to be finalized and to improve as well. 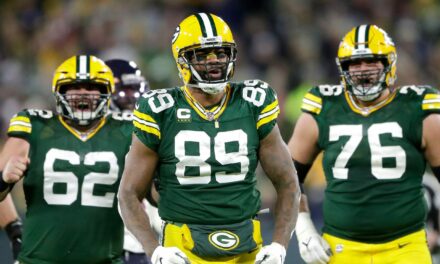