Packers OT David Bakhtiari’s Complaint About the NFL Is Right, But Will It Change Anything?

Green Bay Packers offensive tackle David Bakhtiari took to Twitter Saturday afternoon with a complaint about the NFL. Here’s what he had to say:

It’s 2022. Why do we still have turf fields?.. I think all franchises make enough to afford and maintain natural grass at this point.

Keep in mind that Bakhtiari missed the first 16 games of the 2021 season after suffering a serious knee injury that required surgery in December of 2020. He had to undergo a second surgery late in 2021 to “clean up” the knee and only played the first half of the Packers regular season finale in Detroit, a game played indoors on artificial turf.

Two weeks later, Bakhtiari was unable to play in the Packers home playoff game against the 49ers. His absence was definitely felt as the San Francisco defense was able to get consistent pressure on Aaron Rodgers and held the Packers to 10 points in their 13-10 upset win that ended the Packers season.

Here’s the thing about what Bakhtiari Tweeted: he’s undeniably correct that artificial turf is tougher on players’ bodies than natural grass. Anybody who has ever played any sport on turf, even the better, more modern versions of it, can tell you the pounding it causes on the body and statistics back up the fact that more injuries do happen on artificial turf than on natural grass.

When you think of the millions of dollars that NFL teams pay their players, you would figure they would want to do all they could to protect that investment. I mean, each NFL team has a salary cap of roughly $208 million in 2022. Multiply that by 32 teams and you have salaries totaling more than $6.6 billion for this season alone.

But the fact is that those NFL teams that play on artificial turf are unlikely to change their playing surfaces to natural grass any time soon. And the reason is quite simply, money.

Some teams that play on artificial turf play in domed stadiums. While it is possible to grow and maintain a grass surface inside a dome, it is not easy to do so. It requires a lot of maintenance and work and you need to pay people to do that work.

Other teams play in areas that are very cold or very dry which makes it tougher to maintain a grass field throughout the football season. Tougher, but not impossible as the Packers have proven as they still play on a natural grass surface at Lambeau Field.

But more importantly for NFL owners, natural grass just isn’t as durable as artificial surfaces are. Let’s face it, even if you include preseason games and playoff games, most NFL stadiums are used for football games no more than 14 times a year. At most, an NFL team has two preseason home games, nine regular season home games and three playoff home games.

But the owners and the cities who run these facilities want to make money on the other 350 or so days of the year. So, they’ll hold concerts, conventions, business meetings and anything else they can hold at these facilities. Over the course of a year, each facility can earn millions of dollars from renting out their stadium.

Guess what: if you hold a concert on a grass field, the damage to the grass could be significant. The damage to artificial turf, however, is minimal and more easily repaired if it does happen. For the owners of the teams and the stadiums, it’s all about the money they can make and save by using artificial turf.

In addition, since NFL contracts aren’t guaranteed, if a player suffers a career-ending injury, the team is only on the hook to pay them for the rest of the season even if they are under contract for several more years. There may be a small injury settlement, but that’s peanuts compared to the money the owners can make by staging concerts and other events at their venues.

This really is an issue that Bakhtiari needs to bring up with the NFL Players Association. It is something the players need to collectively bargain with the owners to help reduce the injuries suffered by players that can affect them long after their football careers are over.

Bakhtiari is right about artificial turf. But now it’s up to him and the rest of the NFL players to stick to their guns and negotiate a deal with the owners to do something about it.

Ten Interesting Facts You May Not Know About Brett Favre 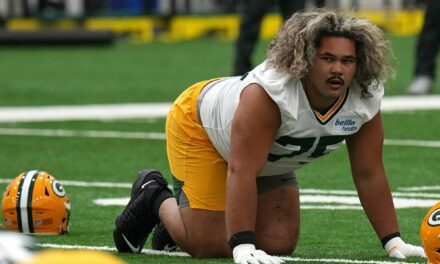