Since he became the Packers starting quarterback in 2008, Aaron Rodgers has dominated the other three teams in the NFC North.

The Packers have won eight division titles during that time and made the playoffs 11 times. The road to the playoffs starts with play against your division foes and Rodgers has excelled in this area.

In fact, over the last two seasons, Rodgers has thrown 38 touchdown passes and zero interceptions in the 12 games he played against NFC North opponents.

Here is a look at how Aaron Rodgers has fared against the Packers three divisional foes, the Minnesota Vikings, Detroit Lions and Chicago Bears. The teams are listed in alphabetical order:

Some of Rodgers’ best games and most clutch performances have come against the Bears. In 2014, the Packers crushed the Bears 55-14 and Rodgers threw six touchdown passes in the first half before leaving the game early because it was such a big blowout.

In 2013, Rodgers rallied the Packers to a comeback victory in the season finale in Chicago that clinched the NFC North crown and a playoff berth for the Packers. With 38 seconds left in the game, Rodgers found Randall Cobb for a 48-yard touchdown pass that put the Packers ahead to stay, 33-28. Both Rodgers and Cobb returned for that game after missing considerable time earlier in the season due to injuries.

Rodgers also beat the Bears in the 2010 NFC Championship Game which got the Packers to Super Bowl XLV. In that game, Rodgers ran for a touchdown on a cold, windy day at Soldier Field. His most memorable play was a shoestring tackle of Bears linebacker Brian Urlacher that saved a touchdown and helped the Packers win the game 21-14.

Rodgers has also done well against the Lions with the Packers winning 18 games he started against Detroit while losing just six. Rodgers has completed 65.7 percent of his passes versus the Lions with 52 touchdown passes and just eight interceptions. His quarterback rating is 108.8, just a little lower than his numbers against the Bears.

The most memorable Rodgers moment against the Lions came in 2015 in Detroit. The Packers trailed 20-0 midway through the third quarter before Rodgers led a comeback.

On the final play of the game, Rodgers threw a Hail Mary to tight end Richard Rodgers from 61 yards away that almost hit the ceiling at Ford Field before landing in Richard Rodgers’ arms. The Packers won the game 27-23 on that play.

The future Hall of Fame quarterback has thrown three of more touchdowns in a game against Detroit nine times including three games with four scoring passes.

The Vikings have given Rodgers and the Packers more difficulty than any team in the NFC North since Rodgers became Green Bay’s starting quarterback. The Packers are 16-10-1 in the 27 games Rodgers has started against the Vikings.

While the Packers win-lost record isn’t as strong against Minnesota as it is against Detroit or Chicago, Rodgers’ individual statistics are actually better than they are against the other NFC North rivals. Rodgers has completed 68.3 percent of his passes, thrown 56 touchdowns and just seven interceptions. His quarterback rating is 110.4.

He also has a 104.9 quarterback rating in the only playoff game he played against the Vikings, a 24-10 Packers win back in the 2012 postseason.

Six times, Rodgers has thrown four touchdown passes against the Vikings while not throwing an interception. One of those games was a 45-7 thrashing of the Vikings at Lambeau Field in Week 10 of the 2011 season.

Overall, the Packers have a combined record of 56 wins, 21 losses and one tie during the regular season against NFC North foes. That’s a winning percentage of .724 or roughly a 12-5 record over the course of a 17-game regular season. Rodgers has thrown for 169 touchdown passes and just 25 interceptions.

In the playoffs, the Packers are 2-0 against NFC North opponents when Rodgers started the games, beating the Vikings and Bears once each.

The way Rodgers has dominated division opponents has been a big reason for the Packers success in the division since A-Rod became the starter in 2008. 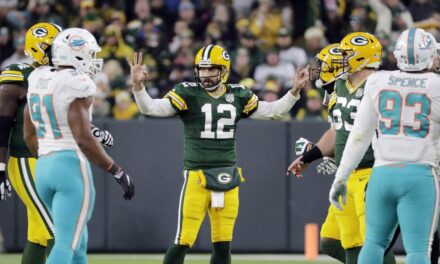