The Green Bay Packers are one of the top contenders in the NFC and at 10-3, have one of the best records in the NFL. With the possibility of getting as many as three Pro Bowl-caliber players healthy before the season ends, this team could get even better.

The Packers offense and defense have both played at a high level over the course of the season. The defense is even ranked sixth in yards allowed per game and seventh in points allowed per game while the offense is hitting its stride, scoring 112 points in their last three games, an average of 37.3-point per game.

The most frustrating thing is that Green Bay’s special teams are not getting noticeably better. In fact, the win over the Bears on Sunday night may have been their worst performance of the season.

But after that, the Packers made enough mistakes on special teams against the Bears to last an entire season.

Against Chicago, the Packers special teams did the following:

On that play, punter Corey Bojorquez made a long punt that outkicked the coverage. The punt coverage unit got sucked inside and then beaten soundly to the outside where a huge lane opened and Grant was able to easily score the longest punt return in Bears franchise history.

Grant also had a punt return of 34 yards earlier in the game.

The kickoff went out of bounds which gave the Bears a short field on their own 40-yard line. That is giving a big assist to the struggling Chicago offense.

The Bears kick returners had a 42-yard kickoff return and a 40-yard return in this game. The 42-yard return by Khalil Herbert led directly to a 44-yard field goal by the Bears on the final play of the first half. That made the score 27-21.

The 40-yard return was wiped out when Rasul Douglas intercepted Fields and returned it 55-yards for a touchdown, but the poor kick return coverage allowed the Bears to take an early lead and keep this game close a lot longer than it should have been.

With 4:21 left in the first quarter and the Packers trailing 3-0, Malik Taylor fielded a kickoff that was heading out of bounds. Had he let it go out, the Packers would have gotten the ball at their own 40. Instead, Taylor stepped out of bounds at the Packers five and the return was officially for no gain.

The Packers moved the ball 51 yards before they had to punt. Had they started on the Chicago 40, they would have been on the Bears nine yard line and certainly in field goal range. Instead, they punted the ball away to the Bears who scored a touchdown on the ensuing drive to take a 10-0 lead.

Late in the game, the Packers were ahead 45-30 after Chicago kicked a field goal. That made it a two-possession game with 1:21 left in the fourth quarter.

Marquez Valdes-Scantling muffed the onsides kick and it was recovered by the Bears at the Green Bay 46. Chicago reached the Green Bay 27 before Chandon Sullivan intercepted Fields to allow the Packers to run out the clock.

MVS was mishandled the ball and seemed very unsure of how to handle the kick although he had a clear chance to field the ball without any Bears players around him.

Early in the fourth quarter, rookie Amari Rodgers muffed a punt which the Bears recovered at the Green Bay 20. The Packers were fortunate to have that play wiped out by a Chicago penalty and the Bears had to punt again. On that play, Rodgers returned the punt 15 yards.

Had the penalty not been called, the Packers would have given the Bears a golden opportunity to get back into game.

After the game, head coach Matt LaFleur stressed that he had no intentions of replacing special teams coordinator Maurice Drayton despite the team’s continuing struggles on special teams.

“Absolutely not,” LaFleur told reporters when asked about replacing Drayton. “We’ve got to continue to work, we’ve got to look at the tape, we’ve got to get things corrected. I’ll be the first to tell you, are there some things we have to clean up as coaches? No doubt about it. But we have to execute better as well.”

Drayton’s job is safe for now and a late-season change of special teams coordinators may not do much good, but unless the special teams stop hurting the team, changes will be coming again this offseason.

Quarterback Aaron Rodgers knows that special teams must be better. “Chicago has had an up-and-down season,” Rodgers said. “Obviously they wouldn’t be considered a great team at this point. But when you’re playing great teams and the kind of football we’re going to be playing here over the next month, we need to be a lot more sound in that phase of the game.”

The Packers were able to overcome their special teams mistakes to beat a mediocre Bears team, but in a close game against another Super Bowl contender, mistakes like the ones the Packers made on Sunday could cost them a trip to the Super Bowl. 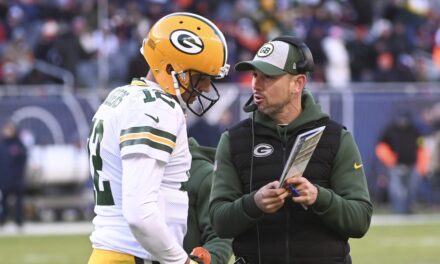