Brett Favre was one of the greatest quarterbacks to ever play the game and by the time he retired, he had the most touchdown passes and yards in NFL history. Favre was the Packers starting quarterback from 1992-2007 and had many outstanding performances during his time in Green Bay.

Here is a look back at the 10 best games of Favre’s Packers career. Games are listed based on their importance, how memorable the performance was and the impact it had on the Packers and the game.

Feel free to comment on any games you think belong on this list or should be higher or lower in the rankings.

Favre spent part of the offseason prior to the 1996 in rehab, dealing with an addiction to pain killers. Nobody was sure what effect that would have on the reigning NFL MVP. Favre erased all doubt in a Week 1 game in Tampa. He completed 20-of-27 passes for 247 yards and four touchdowns without throwing an interception. Three of the touchdowns went to tight end Keith Jackson while running back Dorsey Levens caught the fourth.

Favre served notice to the league that he was ready for the 1996 season and would not be hindered by his addiction. He went on to win his second straight league MVP award and to lead the Packers to their first Super Bowl since the Lombardi Era.

The 49ers and Cowboys were the dominant teams in the NFC and faced each other in the last three NFC Championship Games. But the Packers changed all that with a 27-17 upset in this game in San Francisco that announced Green Bay’s arrival as an elite Super Bowl contender.

Favre completed 21-of-28 passes for 299 yards and two touchdown passes, one to Jackson and one to Mark Chmura. The Packers held a 21-3 halftime lead and cruised to the victory. Favre completed passes to seven different receivers while Jackson and Robert Brooks both topped 100 yards receiving in the game.

Favre went on the road and defeated one of the best team’s in the league in a playoff game and the Packers were on their way to the next level.

Favre’s legendary consecutive games started streak was in serious jeopardy as he suffered a severe ankle sprain the week before and his status for the game was uncertain.

Favre didn’t practice all week but he answered the bell on game day and picked the Bears apart in the Packers 35-28 victory. Favre completed 25-of-33 passes for 336 yards and five touchdowns while not throwing any interceptions. His quarterback rating for the game was an impressive 147.2.

Robert Brooks and Edgar Bennett caught two touchdown passes apiece while Dorsey Levens had the other.

The Packers trailed 28-21 late in the third quarter before Favre tied it on a 44-yard toss to Brooks and then won it on a 16-yard pass to Bennett.

An end zone interception by LeRoy Butler and a last play stop by the Packers defense left the Bears 14 yards short of tying the game as time expired.

Favre proved his toughness and durability in this game and rose to the occasion to defeat the Packers biggest rivals.

Favre passed Dan Marino in this game to become the NFL’s all-time touchdown pass leader with 421. The record setting toss came late in the first quarter on a 16-yard pass to Greg Jennings. Favre extended the record in the fourth quarter with a 33-yard scoring pass to James Jones.

Favre completed 32-of-45 passes for 344 yards and the two touchdowns in this game which the Packers won 23-16.

Brett finished his NFL career with 442 touchdown passes, a record that has since been surpassed but the moment was a big milestone for Favre in his final year with the Pack.

This was the Packers final home game at Milwaukee County Stadium and a game the team needed to win to stay in the playoff hunt.

But the Packers trailed 17-14 when they got the ball back at their own 33 with 1:58 left in the game with one timeout remaining. Favre led the team downfield, completing passes to Chmura, Brooks and Morgan to give the Pack the ball at the Falcons nine-yard line in the closing seconds.

The Packers were out of timeouts and head coach Mike Holmgren told Favre not to scramble. Favre dropped back to pass and when the play broke down and he was pressured, he started to run for the goal line. Favre leaped for the right corner of the end zone and scored with 14 seconds left in the game to give the Packers the victory.

It was a dramatic last home game in Milwaukee and typical Favre, making something out of nothing and making a gutsy call that drove his coach crazy until it worked and won the game.

The Packers had gone 29 years without a Super Bowl berth but that all changed on January 12, 1997, when they hosted the Panthers at Lambeau Field in the NFC title game.

Things didn’t start well for “The Gunslinger.” Late in the first quarter, his pass for Don Beebe was intercepted by Sam Mills and returned to the Packers 2. A few plays later, the Packers trailed 7-0.

But Favre overcame the slow start and finished the game by completing 19-of-29 passes for 292 yards and two touchdowns, one to Levens who made a dramatic, leaping catch in the corner of the end zone and the other to Antonio Freeman.

Favre did this despite the three degrees above zero temperature with a wind chill of minus-16. The Packers cruised to a 30-13 win and won their first championship game at home since the legendary Ice Bowl in 1967.

This was Favre’s first meaningful action as a Packer and the game that started his legend. Starting quarterback Don Majkowski was injured early in the game and Favre came on to lead the Pack to a stunning 24-23 comeback win.

Although Favre didn’t know all the proper play calls and formations, he improvised his way to a last minute rally that culminated with a 35-yard touchdown pass to Kitrick Taylor to tie the game. Chris Jacke booted the extra point and the Packers upset the Bengals 24-23.

Favre finished the game 22-of-39 for 289 yards and two touchdowns. His leadership and love of the game were clearly on display as he led the Packers to the win.

From here on in, everybody knew who Favre was and how to properly pronounce his name.

This was Favre’s playoff debut and the Packers first appearance in a playoff game in a non-strike year in 21 seasons and the young gunslinger proved he was equal to the task. Favre threw three touchdown passes to Sharpe including a 40-yard pass off a scramble that saw him throw across his body for the winning score in the final minute of the game.

Favre’s stats in this game were average. He completed 15-of-26 passes for 204 yards and the three touchdowns. But his ability to come through in the clutch and to lead his team to an upset road win in his first NFL playoff game made another statement and provided fans with a memorable finish.

The Packers reached the Super Bowl for the first time in 29 years and Favre made sure they didn’t leave empty-handed. He threw two long touchdown passes in this game, a 54-yard bomb to Andre Rison and a then Super Bowl record 81-yard toss to Freeman and then ran for another score just before halftime.

Favre finished the game 14-of-27 for 246 yards and the two touchdowns while not throwing any interceptions. His quarterback rating was 107.9.

While Desmond Howard won the MVP, Favre got the late John Madden’s vote and played an excellent game. The win culminated a long journey for Favre from rehab in the offseason to Super Bowl champion.

There have been few games in the history of the NFL with more emotional drama than the performance Favre delivered on December 22, 2003, in Oakland. Although Favre’s father had just passed away unexpectedly, the quarterback decided to play and turned in one of the best performances of his career under extremely difficult conditions.

Even the usually hostile Oakland crowed cheered Favre before the game and respected the emotional toughness he showed in taking the field for a game the Packers had to win to keep their playoff hopes alive.

On this night, everything Favre tried worked and worked perfectly. He completed 22-of-30 passes for 399 yards and four touchdowns and had a career-high single-game quarterback rating of 154.9.

Javon Walker caught two of the touchdown passes while tight ends Wesley Walls and David Martin caught the others.

It was an emotional night that brought Favre and his teammates and the fans closer together and was the most unforgettable performance of the Hall of Fame quarterback’s career. 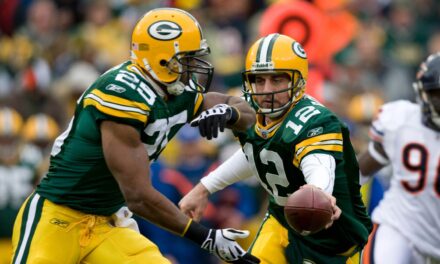 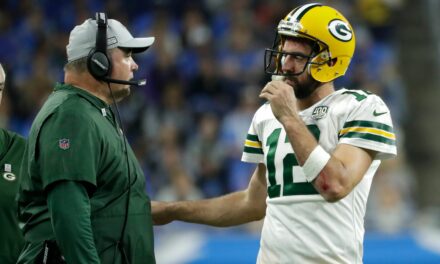