The 2022 NFL Draft is fast approaching and the Packers have a pair of first round picks for the first time since 2019. The first round is the part of the draft that garners the most headlines and obviously the most highly-ranked players come off the board in this round.

One year ago, we looked at the Packers most disappointing first-round picks since 1980, so this year, we will look at the best picks the Packers made in the first round since 1980.

Only first-round picks are eligible for this list. Players selected in other rounds, even if they were the Packers first pick in that year’s draft, are not eligible for this list. That disqualifies Jordy Nelson, for example, who was the Packers first pick in 2008 but was selected in the second round with the 36th overall selection.

It is also too soon to rank players from the 2020 and 2021 NFL Drafts as we still do not have enough seasons to judge them fairly and we don’t know how their careers will unfold.

Here is a look at the Packers best first-round picks since 1980:

The Packers added Clark with the 27th overall pick in the 2016 NFL Draft. The former UCLA star was starting by his second season and recorded 4.5 sacks which is an impressive total for a nose tackle. He’s been a quality starter for the Packers ever since.

Clark has earned Pro Bowl honors twice thus far, first after the 2019 season and again after 2021. Clark has the strength to hold off blockers at the point of attack and can get penetration on the pass rush. He has recorded two six sack seasons and that’s even more impressive because the Packers have never had other defensive linemen next to Clark who contribute much to the pass rush. His career high in tackles for loss was nine back in 2019.

Clark is still just 26 and won’t turn 27 until October. He should have several more prime years to add to his legacy.

Alexander is a talented cornerback with elite speed and a ton of confidence. He earned All-Rookie honors in 2018 and as he improved, became one of the league’s elite shutdown corners by 2020. That season, he earned Pro Bowl honors for the first time.

The Louisville alum has held opposing quarterbacks to a completion percentage of 55 percent or less in each of the last three seasons. His confident attitude is contagious and helps inspire his teammates and he has the ability to limit one receiver on nearly every play.

The one thing Alexander needs to work on is his ability to get his hands on potential interceptions. In four seasons, he has a total of five picks. The fact that he is still regarded as one of the league’s best corners despite his low interception total tells you how much respect the league has for his cover skills.

Alexander is coming off a shoulder injury that limited him to four games in 2021. At 25, he should be just entering his prime and if he signs an extension with the Packers, he could be a fixture at cornerback for the next several seasons.

Clay Matthews was the Packers second pick in the first round in 2009, coming 17 picks after they selected DL B.J. Raji with the ninth overall choice. Both players would go on to Pro Bowl careers.

Matthews made an immediate impact with the Packers recording 10 sacks in his rookie season and earning Pro Bowl honors. He made the Pro Bowl six times in his first seven seasons in the league and was All Pro in 2010, the year the Packers won Super Bowl XLV.

Matthews made a game-changing play in the Super Bowl, stripping Steelers running back Rashard Mendenhall of the football to set up a Green Bay score early in the fourth quarter.

In 10 years with the Packers, Matthews recorded 83.5 sacks including a career-high 13.5 in 2010. He provided the team with a steady pass rush and was a leader on the defense.

Matthews is a sure-fire inductee into the Packers Hall of Fame. His last season in the NFL was in 2019 when he spent a final year with the Rams.

Sterling Sharpe was a dominant receiver during his seven seasons with the Packers. He earned Pro Bowl honors five times was an All Pro three times. He led the NFL in catches three times, setting a new single-season receptions record with 108 in 1992 and then breaking that record a year later when he had 112 catches.

He also came up big for the Packers in the postseason, catching three touchdown passes in his first career playoff game including the game-winner in the final minute as the Packers upset the Lions 28-24 in Detroit in 1993.

Unfortunately, Sharpe’s career was cut short by a neck injury that forced him to retire at the age of 29 after the 1994 season. He still made 595 career catches for 8,134 yards and 65 touchdowns. He was on his way to a Hall of Fame career but the injury derailed it. He was inducted into the Packers Hall of Fame in 2002.

The Packers were surprised when potential first overall pick Aaron Rodgers fell to them at 24 and they selected him even though they had Hall of Famer Brett Favre already on their roster.

Rodgers took over the starting spot in 2008 after learning three years behind Favre and proceeded to become one of the best quarterbacks ever to play the game.

The former Cal star led the Packers to a Super Bowl title after the 2010 season and is now the team’s all-time leader in touchdown passes with 449. He has thrown just 93 interceptions in his 17-year NFL career.

Rodgers has gone to the Pro Bowl 10 times and is a four-time All Pro and four-time NFL MVP.

There is little doubt that Rodgers will be a first-ballot Hall of Famer five years after he retires from the game. 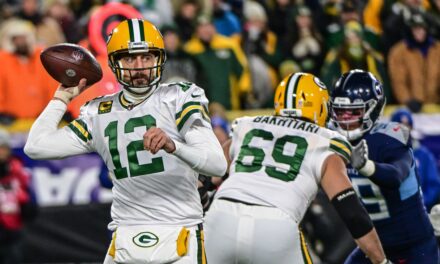 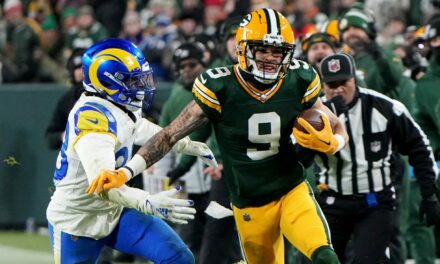