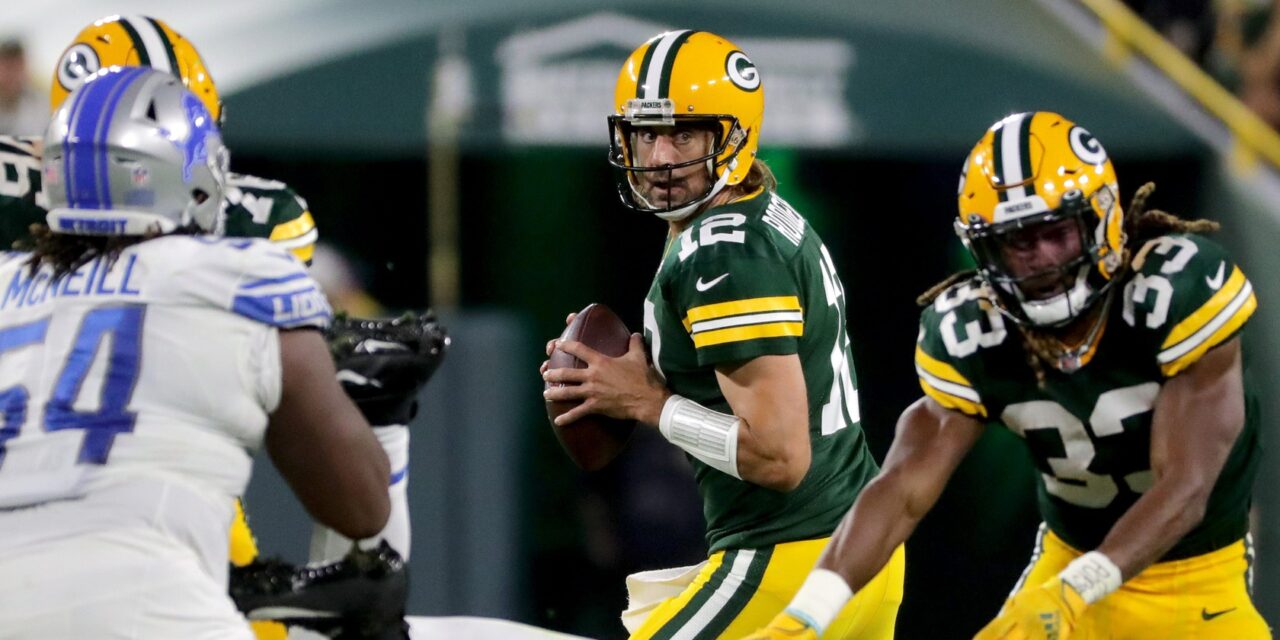 The Green Bay Packers will have their season on the line on Sunday when the host the Detroit Lions on Sunday Night Football at Lambeau Field. If the Packers win, the clinch the final wild card spot in the NFC, if they lose, their season is over. The Lions are 8-8 and need to win and get a little help to qualify for the playoffs.

The Packers are coming off a 41-17 win over the Vikings last Sunday. The Packers are now 8-8 and are gunning for their fifth consecutive win. The Lions crushed the Bears last week 41-10 in their home finale to keep their playoff hopes alive.

Here is a look at six key factors that will determine who wins Sunday night’s game at Lambeau Field:

Goff is having a strong season and his quarterback rating is now 100.1. He has thrown for 4,214 yards, 29 touchdowns and tossed just seven interceptions.

There are some things working against Goff this week. He has been much better at home than on the road and has often struggled in cold weather throughout his career.

Goff also has one of the bigger drop-offs statistically when he’s throwing from a clean pocket as opposed to when he’s under pressure. He’s only been sacked 22 times this season because the Lions have a good offensive line, but if defenses pressure him, Goff’s numbers fall off dramatically.

The Packers defense has done a good job in recent weeks of pressuring the quarterback. Kenny Clark has picked up his game since December and is getting pressure from the interior. Devonte Wyatt has also played well and now has a bigger role after Dean Lowry was placed on IR. Preston Smith and Kingsley Enagbare have gotten more pressure off the edge with Justin Hollins adding depth at the position.

If the Packers can pressure and rattle Goff, they can slow down the very potent Detroit passing game.

Detroit has some injuries along the offensive line including Pro Bowl center Frank Ragnow who missed practice on Wednesday and Thursday with a foot injury. Right guard EvaAmon Brown was limited at practice due to an ankle injury but should play on Sunday.

St. Brown is the brother of former Packers wideout Equanimeous St. Brown and he is by far the best receiver on the Detroit roster.

St. Brown has 100 catches for 1,112 yards and six touchdowns. He’s not a deep threat like Justin Jefferson who can change the momentum of a game in one big play but he’s going to get his catches and keep the sticks moving by gaining 11 yards on 3rd-and-10.

The Packers would be wise to match Jaire Alexander on St. Brown most of the time, much like they did so effectively to Jefferson last week against the Vikings.

No other two Lions receivers combined have as many catches as St. Brown although D.J. Chark is a solid deep threat who is averaging 18.1-yards per catch on 27 receptions.

The Packers must mix up their coverages and make sure St. Brown doesn’t beat them consistently to contain the explosive Lions offense.

Detroit has a pair of outstanding rookie pass rushers in first round pick Aidan Hutchinson (7.5 sacks) and sixth round pick James Houston who has eight sacks in just six games.

The Packers are fortunate to have left tackle David Bakhtiari back in the lineup after his emergency appendectomy. Right tackle is more of a question with Yosh Nijman nursing a shoulder injury that caused him to exit the Minnesota game early. If Nijman can’t play, rookie Zach Tom will likely get the nod in his place. Tom has been steady and has played every position along the line this season except center.

If the Packers can give Rodgers time to throw, he should be able to exploit the Detroit secondary which is ranked 30th in the league and is allowing 249.4-yards per game through the air.

In the first meeting between these teams, Rodgers moved the ball well until the Packers got into the red zone where Rodgers threw three interceptions.

Look for Rodgers to try to get deep with Christian Watson a few times in this game, but shorter passes to Romeo Doubs and Allen Lazard or running backs Aaron Jones and A.J. Dillon may also help keep the Lions pass rush at bay.

The Packers offense works best when they don’t abandon the running game and keep the offense balanced. Jones and Dillon have played well in recent games and when the team runs, it sets up the play-action passing game.

Jones went over 1,000 yards for the season last week and needs 31 yards to set a new career-high in rushing yards in a season. Dillon has played better in the last month after getting off to a slow start this year. He has been a touchdown machine lately, scoring six touchdowns in his last five games.

The Lions run defense is 29th in the league, allowing 149.3-yards per game. The Packers offensive line should be able to open holes for Jones and Dillon to make steady gains if Matt LaFleur and Rodgers don’t abandon the run too quickly.

Opponents are averaging 5.3-yards per rush against Detroit, which is 30th in the league and even worse than the Packers shaky run defense.

The Packers should run the ball effectively and often against Detroit which will also help keep the Lions offense off the field and prevent the Detroit defense from teeing on Rodgers on passing plays.

The Packers red zone offense has struggled all season and is presently 22nd in the league, scoring touchdowns just 51.9 percent of the time when they get inside the opponent’s 20.

In the first meeting between these teams in Week 9, the Packers scored just one touchdown despite being in the red zone multiple times. Rodgers was picked off three times in the game and that’s the biggest reason the team scored only nine points despite outgaining Detroit 389-254 in the game.

The Packers must cash in when they get inside the red zone and turn those opportunities into touchdowns.

Former Packers running back Jamaal Williams has already has a career-high 994 yards rushing this season and needs just six yards to go over 1,000 for the first time in his NFL career. He also leads the NFL with 15 rushing touchdowns.

The Packers run defense has struggled all season and Williams is particularly effective on a slow field whether that’s due to wet conditions or a cold day that slows things down.

The Lions have a strong offensive line and the Packers must figure out how to slow down Williams or to get ahead early and make the running game only a minor part of the Lions game plan later in the game.

Williams is having a great season and the Packers can’t let the Lions run with him or D’Andre Swift and control the ball and the game that way.

Rodgers and the Packers have had three previous win or go home games since 2008 when Rodgers became the starting quarterback and they have won all three.

The Lions are by now means an easy opponent and they have improved by leaps and bounds this season. It’s not clear if the Packers are better off if the Lions are still in the playoff hunt when the game kicks off Sunday night or if they’re eliminated but the bottom line is the Packers need to find a way to win.

Either way, the Packers have a big advantage that this game is outdoors in the cold against a dome team. They will find a way to get it done but it won’t be easy.