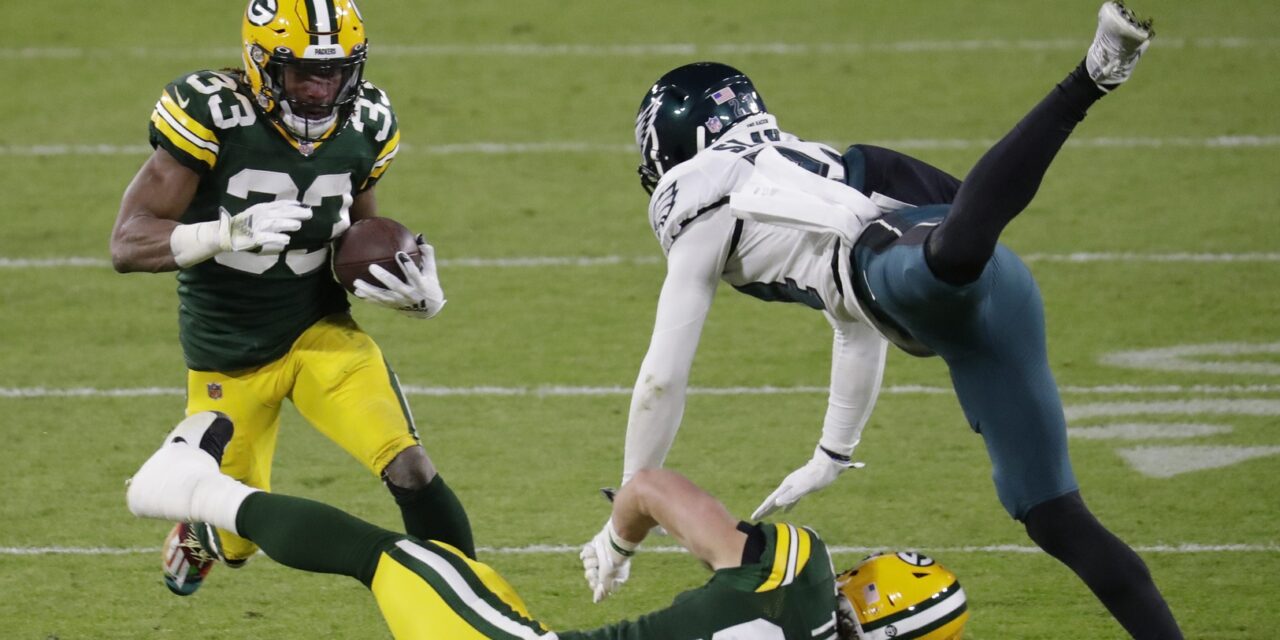 The Green Bay Packers head to the City of Brotherly Love to take on the Philadelphia Eagles on Sunday Night Football. The Eagles are 9-1 and in first place in the NFC East.

The Packers are coming off a disappointing 27-17 loss to the Tennessee Titans at Lambeau Field. That dropped the Packers record to 4-7 and the Pack’s playoff hopes are fading fast. The Eagles bounced back from their first loss of the season two weeks ago and edged the Indianapolis Colts 17-16 last Sunday.

Here is a look at six key factors that will determine who wins Sunday’s game in Philadelphia:

The Packers have struggled against mobile quarterbacks in recent years and Hurts certainly fits that category.

He is very capable of picking up key first downs after scrambling to avoid pressure. The Packers defense needs to play more zone defense against the Eagles because if they play exclusively in man coverage, Hurts could have large areas of open field to run through.

The Packers may also want to use the speedy Quay Walker to try to spy on Hurts and make sure he doesn’t have too much room to run.

The Packers offense was successful against good defenses like Dallas and Buffalo when they ran the ball enough to set up the play action passing game.

The Eagles defense is second in the league against the pass but only 19th against the run and they allow 122.2 yards rushing per game. When you add the fact that the Eagles have been ahead for most of their games this season, it shows how vulnerable their run defense is. Opposing teams are averaging 4.6-yards per carry against Philadelphia this season.

The opportunities should be there for Jones and A.J. Dillon. The Packers must stick with the run enough to play complimentary football, keep the Eagles offense off the field and create chances for the passing game.

The Eagles have two good receivers in A.J. Brown and DeVonta Smith. Smith leads the team with 52 catches and is more of a possession receiver while Brown tops the club with 785 receiving yards and six touchdown catches and is the better deep threat.

Brown missed Thursday’s practice with an unspecified illness but is likely to play on Sunday.

The Packers secondary cannot afford to give Brown and Smith a large cushion off the ball like they did last week against the Titans. The Packers corners will need to be more physical at the line of scrimmage and the secondary will need to communicate better than they have thus far this season when players are moving from one player’s assigned zone to another.

Rasul Douglas has played better since being moved back to the perimeter and Darnell Savage wasn’t as bad when playing against slot receivers. Jaire Alexander has also had some shaky games this season and the Packers will need him to be at his best.

If Brown and Smith are open, Hurts will find them and the Packers defense will have a hard time limiting the production of a talented Eagles offense.

The Packers offensive line has been a bit better in recent weeks as the lineup has been healthier and more consistent but they still need to protect Rodgers.

The Eagles do a good job of pressuring opposing quarterbacks and are presently third in the NFL with 32 sacks. Haason Reddick leads the team with 7.5 sacks followed closely by Javon Hargrave with seven. A total of 11 players have at least a half a sack so the Eagles aren’t afraid to blitz and send different players from different formations.

David Bakhtiari will likely draw the primary assignment of slowing down Reddick while Elgton Jenkins and Josh Myers will deal with Hargrave.

With Rodgers nursing an injured thumb and having a developing receiving corps, he will need as much time as possible to be effective against a tough Eagles secondary.

Running back Miles Sanders is the primary back for the Eagles and the Penn State star leads the team with 757 yards on the ground and has rushing touchdowns.  Sanders averages 4.9-yards per rush.

The Packers run defense has struggled most of the season although they did sell out to stop Derrick Henry last week against Tennessee. The defense will not be emphasizing stopping Sanders in the same way so they must do a better job of containing the run.

De’Vondre Campbell has yet to practice this week so it may be up to Walker, Krys Barnes and Isaiah McDuffie to slow down Sanders along with Kenny Clark. Clark has struggled in the past six games after getting off to a strong start this season.

If Sanders runs the ball well, the Eagles offense will be multi-dimensional and it could be a long day for the Green Bay defense.

Whether it’s Watson, Allen Lazard, Randall Cobb or any of the other Packers receivers, hitting on a few deep shots will energize the Packers offense and give them a chance to keep the game close.

If the Packers run the ball effectively, they increase their chances of hitting on some long passes in this game.

It will not be easy against a talented Philadelphia secondary that ranks second in the league and allows an average of just 178.4 yards per game through the air.

This will not be an easy game for the Packers. The Eagles are not playing as well as they did earlier in the season, but they are 9-1, they’re at home and they are eager to bounce back and maintain their hold on first place overall in the NFC and the potential playoff bye that goes with it.

For the Packers to win this game, they have to do a lot of things well that they’ve struggled with all season; that includes stopping the run, staying out of a soft zone, stopping a running quarterback, running the football and completing deep passes. That is a tall order for this team which hasn’t shown much consistency at all.