The Green Bay Packers close out the regular season on Sunday when they travel to Detroit to take on the Lions. The Packers defeated the Minnesota Vikings 37-10 last week to improve to 13-3 and lock up the top seed in the NFC playoffs. Meanwhile, the Lions were crushed by the Seahawks in Seattle 51-29 to fall to 2-13-1 on the season.

The Packers lead the all-time regular-season series between these two division rivals, 103-72-7. These franchises first faced each other in 1930 when the Lions were known as the Portsmouth Spartans. The Packers won both playoff meetings between the two teams in 1993 and 1994. The Packers defeated the Lions in Week 2 of this season, 35-17.

Here is a look at six key factors that will determine who wins Sunday’s game in Detroit:

The actual outcome of this game is not that important to the Packers. Win or lose, they are the top seed in the NFC. Their draft position will be determined by how they do in the playoffs rather than whether they beat or lose to the Lions.

The Packers need to come out of this game without any additional injuries. The team wants to be as healthy as possible for the playoffs which will start in two weeks for Green Bay. Win or lose, that must be priority one for the Packers.

It is still unclear who will start for Detroit but whether it’s Jared Goff or former Packers backup Tim Boyle, the Green Bay defense will need to get some pressure on the Lions signal caller.

Detroit has allowed 34 sacks this season. Their offensive line has been better than it was in recent seasons but they are still vulnerable to a good pass rush. Penei Sewell has been a solid addition this year at right guard while Scott Daly has done a good job replacing the injured Frank Ragnow at center.

Rashan Gary and Preston Smith have provided the Packers with consistent pressure off the edge while Kenny Clark has provided pressure up the middle.

If the Packers can pressure the Detroit quarterback, they can limit the effectiveness of the Lions passing game.

We know the plan is for Aaron Rodgers to start but it is highly unlikely A-Rod plays the entire game. Former first-round pick Jordan Love will likely play the second half and perhaps more of this game.

It is important that the Packers give Love every chance to show what he can do. That means utilizing plays and a game plan that play to his strengths and not just letting Love run the typical Rodgers offense.

Regardless of whether Rodgers returns next season, it benefits the Packers and Love for the team to give him every chance to show what he can do and to realize his potential.

A good showing by Love can increase the confidence the team has in him heading into next season and increase his potential trade value if the Packers choose to go that route.

Jordan Love isn’t the only Packers player who should get a chance for extra reps this Sunday. If the starters play roughly a half, that means some younger players should get valuable experience once the starters come out of the game.

Players like Juwann Winfree, Armani Rodgers, Jonathan Garvin, Shemar-Jean Charles, Patrick Taylor and Tyler Davis could see a lot more playing time in the second half of this game.

This game gives these players an opportunity to play extensively in a regular-season game and to show the coaching staff what they’re capable of. Hopefully, they can give the coaches something to think about regarding their potential for 2022 and beyond.

EQ’s younger brother has been a very pleasant surprise for the Lions in his rookie season. The fourth-round pick out of USC has 82 catches thus far this season for 803 yards and four touchdowns.

He has had eight or more catches in the last five games and has touchdown catches in each of the last three games. St. Brown has become a bigger part of the Lions offense in recent weeks and is quickly becoming the team’s top receiving option.

St. Brown does not have the size his brother does, but he is a precise route runner with good hands and has been a consistent weapon in the Detroit offense.

The Packers may match Rasul Douglas against St. Brown as the former USC star doesn’t have the breakaway speed that would necessitate having Eric Stokes on him. Either way, the Packers need to prevent St. Brown from having a big day as he is a key to the Lions offense keeping drives alive.

Over the last two games, the Packers special teams have been almost average which is a big step forward for a unit that has struggled all season and for years before that.

The Packers signed David Moore last week and he did a good job as a punt returner, averaging 11-yards per return including a 21-yard runback that was the team’s longest of the year.

Moore is still technically on the practice squad and is now on the Covid-reserve list but he may be able to be active by Sunday. If he does, he would be auditioning for the punt return job come the playoffs.

Mason Crosby has done a better job of kicking in recent weeks and hasn’t missed a field goal in the last four weeks.

The Packers also need punter Corey Bojorquez to bounce back from his recent mini-slump. Bojorquez averaged only 31.5-yards per punt last week in the cold in Green Bay. He should have an easier time indoors in Detroit this week.

The Packers coverage teams also need to continue to play well and not allow Detroit’s Godwin Igwebuike to break a long return. Igwebuike is a dangerous return man and had a 47-yard kick return a week ago.

If the special teams units can have another respectable game, it can alleviate some of the concerns the team has been dealing with this season.

This game really means nothing in the standings. The Lions are looking to end a difficult season on a positive note and build some momentum for next year. The Packers are looking to stay sharp and keep their momentum heading into the playoffs in two weeks.

The key to this game is which team will show up and care more. That’s always difficult to determine in advance and a quick start by either team could result in their opponent letting up.

The Packers are the better team and should win this game. 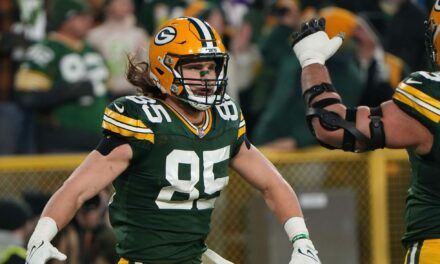