The Green Bay Packers conclude their 2022 preseason Thursday night when they travel to Missouri to take on the Kansas City Chiefs.

Head coach Matt LaFleur already indicated that Aaron Rodgers and most of the starters will not play in this game. So, this is essentially the final chance for the players fighting for roster spots to make an impression on the coaching staff and earn their way onto the team or the practice squad.

Here is a look at 10 Packers players to watch on Thursday night when the Packers face the Chiefs:

Goodson is battling for the final running back spot with Patrick Taylor now that Kylin Hill has been placed on the regular-season PUP list.

Goodson has been the better runner of the two, showing more speed and burst and generally making good decisions as to which blocks to follow.

However, LaFleur and GM Brian Gutekunst have indicated that pass protection and special teams contributions will be big factors in determining who gets the roster spot.

Goodson will have to show what he can do in those two areas to secure a roster spot. Otherwise, the former Iowa star will likely be headed to the practice squad if the Packers can slip him past waivers.

Will the Packers keep five or six defensive linemen? And if they do keep six, which of these two players will earn the roster spot?

Both Heflin and Slayton have played exceptionally well in the preseason, better than expected. Both players have made plays, pressured the quarterback and beaten offensive linemen to penetrate the opposing backfield.

It’s possible the Packers keep one of these two but not both and they may not have room for either of them. But this is the last chance for Heflin and Slayton to make their case that they belong on the roster. It’s likely the Packers would keep both on the practice squad if they don’t earn a roster spot.

Davis is an interesting case for the Packers. The tight end was praised at OTAs and was expected to take a big jump forward and be the team’s primary receiving tight end until Robert Tonyan was back at full strength.

But Davis has struggled mightily in the preseason, committing penalties, dropping passes and playing a poor all around game.

Davis has more natural ability to catch passes downfield than any other tight end candidate on the current roster except Tonyan, so the coaching staff hasn’t given up on him. But unless he bounces back against the Chiefs and shows what he’s capable of, he will not make the team this year.

The Packers fourth round pick in this year’s draft has been battling for a starting spot throughout the preseason. Tom is versatile and can play any of the five positions along the offensive line. He has taken reps with both the first and second string units throughout training camp and in the first two preseason games.

With the return of Elgton Jenkins and David Bakhtiari from the PUP list, guard is the most likely place Tom could earn a starting berth. He would be fighting with Royce Newman for the starting spot on the right side.

If Tom plays well, he could earn a starting job as a rookie. There is a lot at stake for him and Newman in this game.

Amari Rodgers looks quicker and more decisive than he did a year ago but the consistency is still lacking. He has made some big plays like the 50-plus yard kick return and the receiving touchdown against San Francisco, and he has made mistakes by running the wrong route and not being sure about when to field punts and when to let them roll into the end zone.

Rodgers is unlikely to be cut, but he has yet to prove he can be a consistent contributor to the offense. A strong performance by Rodgers would go a long way towards reinforcing his confidence and the way the coaching staff views him as well.

Taylor and Goodson are battling for the final running back spot on the roster. Taylor was serviceable as a runner but exceled on special teams, making two good plays in kick coverage against the Saints. He is also considered a better pass protector than Goodson.

This may be the first chance we get to see Watson in a game situation in a Packers uniform. The second-round pick out of North Dakota State has earned praise from Aaron Rodgers for his attitude and the plays he’s been making in practice.

The time Watson missed due to injury has slowed down his progress and it’s unlikely he’ll play a major role in the offense early in the season. Still, this is a chance for the rookie to show what he can do in a game situation and to gain some valuable experience.

The Packers hope Watson will have a larger role in the offense later in the season and this is the next step in his development.

Walker was playing well early in camp but his play has tailed off a bit against the Saints. Walker has been lining up with the starters for most of training camp, but both Krys Barnes and Isaiah McDuffie have been playing well and making plays.

The first-round pick out of Georgia needs to show just enough against the Chiefs to solidify his starting position and remind the coaching staff why he was drafted in the first round.

A good performance by Walker would put him in the right state of mind before the season opener on September 11 in Minnesota.

Wyatt was held out of the first preseason game against San Francisco after suffering a concussion. He saw his first game action against New Orleans but didn’t make any plays or distinguish himself in that game.

Defensive linemen typically require a little more time to adjust to life in the NFL and Wyatt has been no exception thus far in training camp. The Packers just want to see a little spark of potential from the former Georgia star in this game.

Love has showed progress this preseason but he still has a way to go before he’s ready to be an effective starter in the NFL. He looks more confident and decisive than he has in the past and is doing a better job of choosing his receivers.

The former Utah State star still needs to improve his accuracy and misses passes that should be easy for an NFL quarterback.

If all goes according to plan for the Packers, this will be the last meaningful action Love will see this season. With Rodgers not going to play against Kansas City, Love will likely play three quarters or more of the game. The former first-round pick wants to leave a lasting, positive impression before the season starts and he reverts to backup duty. 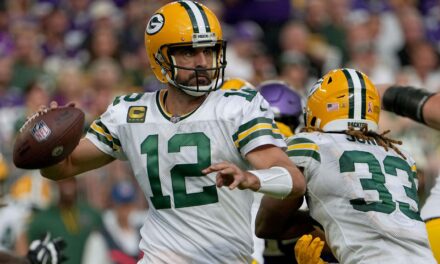