The Green Bay Packers continued to add new talent on day three of the 2022 NFL Draft. It was no surprise to see the Packers add another wide receiver and another versatile offensive lineman with their two picks in the fourth round.

Throughout the third day of the draft, Packers GM Brian Gutekunst added players that would provide depth and have the potential to contribute on special teams while they develop into potential starters once they gain NFL experience.

Here are 10 things we learned from day three of the Packers 2022 NFL Draft:

The Packers added wide receiver Christian Watson in the second round but didn’t hesitate to add another wideout with their first selection in the fourth round (132nd overall). Nevada’s Romeo Doubs has the size the Packers prefer at 6’2”, 200 pounds and he has been very productive in college. He had back-to-back 1,000-yard seasons in college and had 20 touchdowns over the past two years.

Doubs works the middle of the field very well and he’s a physical receiver who is good after the catch and picks up extra yardage.

He does need to work on his technique, especially when coming back for the ball as he sometimes had difficulty lining up his hands the way coaches prefer.

Doubs isn’t likely to be a WR1 in the NFL, but he can develop into a reliable WR2. If he can improve his technique a little bit, he can become a trustworthy option for his quarterback.

Doubs is also a dangerous punt returner which is something the Packers need. His first touch in college was an 80-yard punt return for a touchdown in a game against Portland State.

Even if Doubs needs some time to become an impact player on offense, he should be able to help on special teams immediately.

With the 140th overall pick in round four, the Packers added offensive lineman Zach Tom of Wake Forest. Tom has is 6’4” 300 pounds and started 37 games in three seasons. He has the mobility the Packers like for their zone blocking offense and does a good job blocking on the second level on screens and sweeps.

Tom is also intelligent and can call the signals for the offensive line.

Because he has short arms, he is likely to move inside to center in the NFL.

Tom started 14 games at center at Wake Forest then moved to left tackle where he started for 23 games. While he figures to be primarily a center in the NFL, his experience at tackle means he could play there in a pinch and that’s something the Packers coaching staff always looks for.

His brother, Cameron, played for the Saints and Dolphins.

The Packers added edge rusher Kingsley Enagbare in the fifth round with the 179th overall pick. The 6’4”, 260-pound defensive end was a two year starter at South Carolina and had 15 career sacks and 24 tackles for loss.

He is strong and has long arms and a variety of pass rush moves which he mixes in well. The production was consistently there in college as far as rushing the passer was concerned. Needs a little work changing direction but should be a solid rotational pass rusher with the chance to become a regular with a little coaching and development.

With their first pick in the seventh round (228th overall) the Packers added safety Tariq Carpenter out of Georgia Tech. He is big and range and played box safety in college. He may be a good fit as a hybrid safety/linebacker and likes to hit.

Carpenter should excel on special teams coverage units and the Packers drafted him with that in mind in addition to providing depth on defense.

With their second pick in the seventh round, the Packers added 6’5”, 333-pound, Jonathan Ford out of Miami (Florida). He will likely play nose tackle and concentrate on stopping the run. Ford has size but was not very productive in college, making only three sacks and eight tackles for loss in three years as a starter for the Hurricanes.

His job will be to occupy blockers and hold at the point of attack. He will compete with Jack Heflin for one of the final roster spots as a rotational or depth players along the defensive line.

With their third of four picks in the seventh round, the Packers selected offensive tackle Rasheed Walker of Penn State. At 6’5” and 313, Walker has good size for a tackle and all the tools you could want. He started for three years at Penn State at left tackle but probably projects as more of a right tackle in the NFL because he struggles with speed rushers off the edge.

Walker has a lot of bad habits to correct especially with his balance and footwork. He has all the physical tools to be a starter in the NFL but has yet to put them together consistently. With the right coaching, he could be a seventh round steal. If he doesn’t improve his technique, he may never make an impact.

With their final pick in the draft, the Packers added Samori Toure, a wide receiver out of Nebraska. He was a star at Montana before transferring to Nebraska in 2021. He has deep speed and led Big 10 receivers with a 19.5-yard average per catch and had five 100-yard receiving games.

Toure is already 24 and needs to work on tracking the ball without losing speed and at beating press coverage. His speed should make him an asset on special teams while he learns the offense and fights for a depth spot on the roster.

On day three, Gutekunst addressed his need for depth at various positions. The Packers added two more receivers, an edge rusher, a safety, an offensive tackle and an interior defensive lineman.

Special teams were addressed in this draft as well with several of their picks having experience as return specialists or on special teams coverage units. Hopefully, this and the change in coordinators will help the team in that area which hurt them so badly last season. 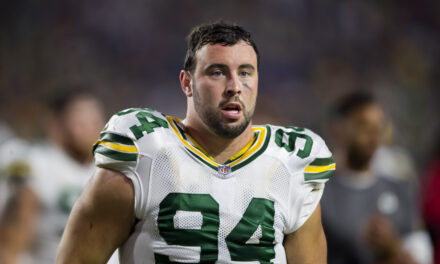