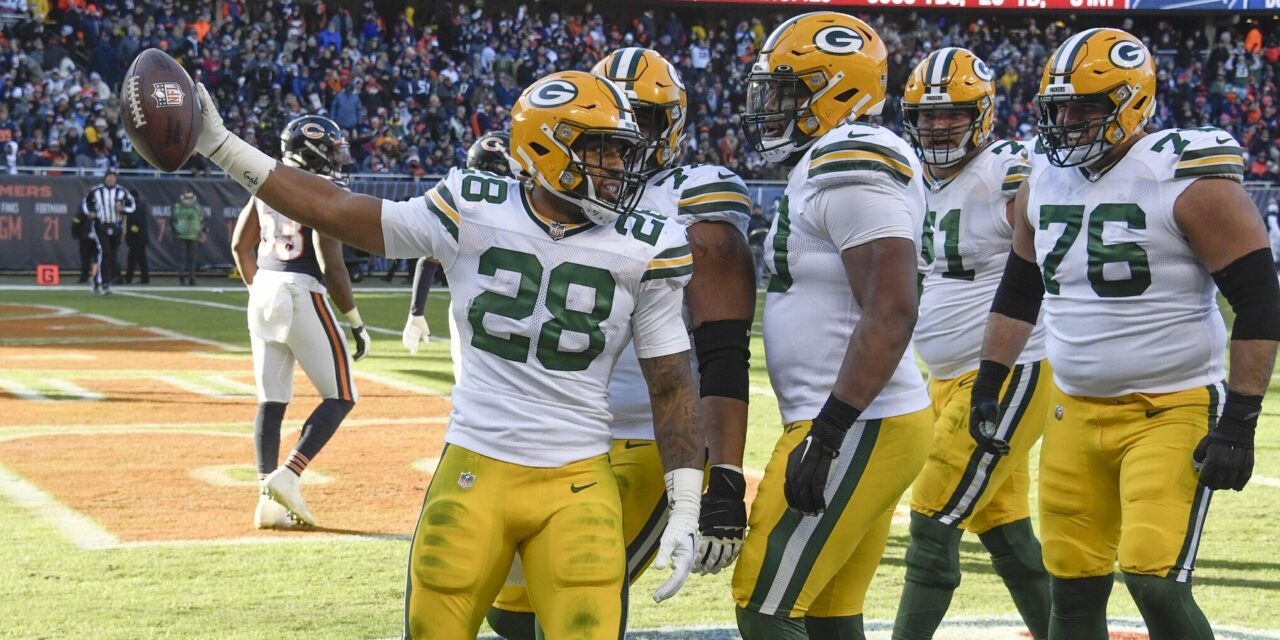 The Green Bay Packers overcame a 13-point, first half deficit to defeat the Chicago Bears 28-19 at Solider Field.

Christian Watson scored two touchdowns, one on a catch and one on an end around while Jaire Alexander and Keisean Nixon came up with important interceptions to seal the victory.

The win improves the Packers record to 5-8 on the season and keeps their slim playoff hopes alive. The Bears dropped to 3-10 with the loss and were swept by the Packers for the fourth straight season.

Here are 10 things we learned from the Packers comeback win over the Bears:

Christian Watson continues to show he’s already a force in his rookie campaign. The former North Dakota State star caught three passes for 48 yards and touchdown and then used his speed to run for a second score on a 46-yard end around. Sammy Watkins made a nice block to spring Watson for the rushing TD.

That gives Watson eight touchdowns in his last four games including three games with multiple scores.

Clearly, quarterback Aaron Rodgers now trusts Watson enough to try to get him the ball in key situations and even though he still has his rookie moments, he is coming up with big plays.

Watson’s speed and size forces defenses to pay attention to him and creates space for other receivers even when he is not the primary target on a play.

Amazingly enough, it feels like Watson is just scratching the surface of his ability. His improved play over the last four games is the best story this season for the Packers.

Dillon was pressed into service as the team’s primary back when Aaron Jones suffered a shin injury that slowed him down and caused him to miss part of the second half.

The former Boston College star answered the call when the team needed him and appears to be getting back on track after a disappointing start to the season.

The Packers were fortunate that Fields was nursing a shoulder injury and didn’t run the ball too often. He finished the game with six carries for 71 yards and a touchdown and led the Bears in rushing yards.

Running quarterbacks have hurt the Packers this season and for at least the last 10 years. This is something the Pack needs to address and soon.

As a team, the Packers allowed Chicago to gain 155 yards rushing and score two touchdowns. The Bears averaged 6.2-yards per rush.

The Packers were playing this game without starting LT tackle David Bakhtiari who was inactive after undergoing an emergency appendectomy earlier this week. Rookie Zach Tom stepped in at left tackle and the offensive line didn’t miss a beat.

Granted, the Bears are one of the worst teams in the league right now at pressuring the quarterback, but they didn’t have any sacks or any quarterback hits in the game as Rodgers has time to throw the football.

Credit Tom and the entire Green Bay offensive line for doing a good job of protecting Rodgers throughout the game.

Wide receiver Allen Lazard tied for the team lead with five catches in this game for 67 yards.

Lazard came through in clutch situations for the Packers, converting two key third down chances on the Packers final drive of the first half that led to Watson’s touchdown catch with 17 seconds left before the break.

When the chips were down, Rodgers went to Lazard and the veteran came through with five catches in six targets.

Jaire Alexander has not been as good in coverage this season as he was in the past. He was burned badly on long passes at least twice against the Bears, allowing a 56-yard bomb to former Packers wideout Equanimeous St. Brown and a 49-yard gain by N’Keal Henry.

But in the fourth quarter with the Packers clinging to a 20-19 lead and having the ball 1st-and-10 from the Green Bay 43, Alexander came up with a huge interception on a pass intended for St. Brown.

Three plays later, Watson scored on his end around and the Packers clinched the win after the two point conversion.

Alexander struggled for most of the game but he came up big when the Packers needed him most.

The Packers defense struggled for most of the game to stop Chicago on crucial third downs. The Bears converted six-of-their first eight third down opportunities which helped them keep drives alive and put points on the board.

The Packers defense did stop the final three chances the Bears had on third down so Chicago finished the game 6-of-11.

Against even an average offense, the results could have been a lot worse. The struggles on third down are related to the next item on this list.

The Packers got almost no pressure on Fields throughout the game. The Packers did not sack Fields and two quarterback hits all game, one by Dean Lowry and one by Jarran Reed.

Because he had so much time to throw, Fields was able to complete 20-of-25 passes against the Packers. Fields entered the game completing 59.6 percent of his passes and is not known for his accuracy. Against the Packers defense, he completed 80 percent.

The Packers clearly miss Rashan Gary and got very little pressure from anybody in Chicago.

AR-12 finished the game completing just 58.1 percent of his passes, going 18-for-31 for just 182 yards and one touchdown. He did not throw an interception.

Rodgers got the job done but he didn’t look particularly sharp or like his usual self in this game. The thumb and rib injuries likely hurt his accuracy but Rodgers managed to gut it out and helped secure the win.

The Packers and the Bears both entered this game with 786 all-time wins, tied for the most in NFL history. With this victory, the Packers are now alone in first place with 787. This is the first time the Bears haven’t held the top spot since the 1920s.

The Packers have also swept the Bears for the fourth consecutive year and have now won 13 of the last 14 meetings.

As much as the Packers are struggling this season, they are clearly still better than the Bears.

How Rich Bisaccia Plans to Improve the Packers Special Teams