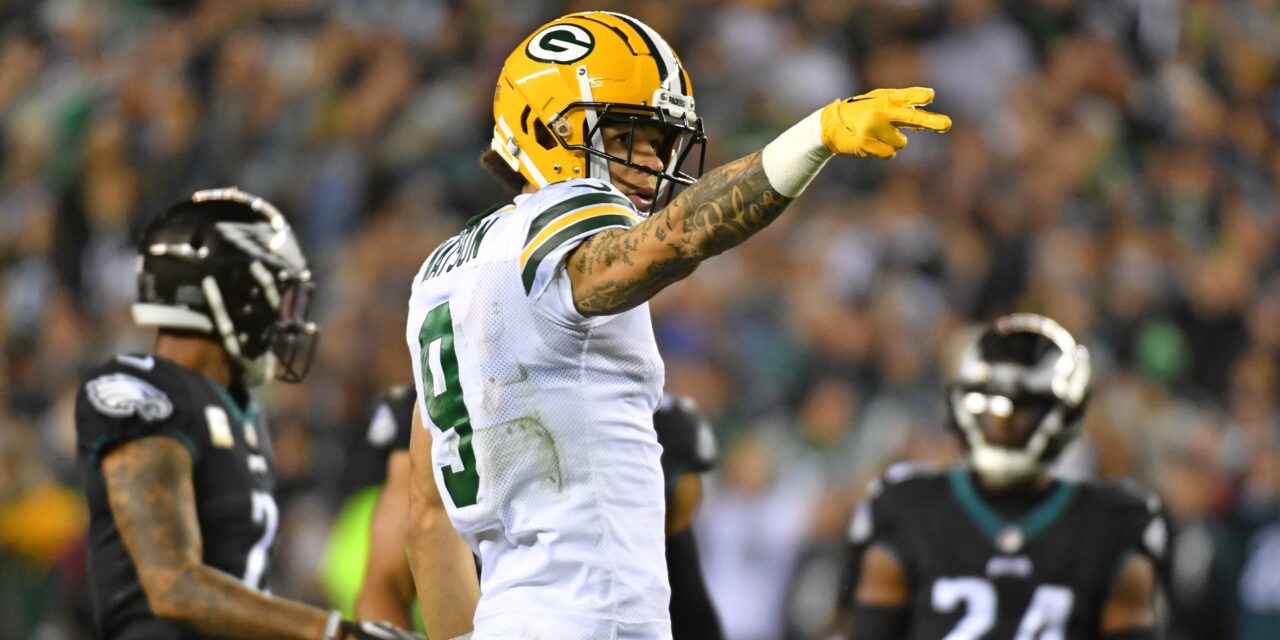 The Green Bay Packers fell victim to another mobile quarterback and saw their late comeback chances fall short as they lost to the Philadelphia Eagles 40-33 on Sunday Night Football.

The Packers lost quarterback Aaron Rodgers and safety Darnell Savage to injuries in this game and had trouble stopping the Eagles offense all game long. Jordan Love played well after Rodgers got injured and Christian Watson extended his touchdown streak to three games but it wasn’t enough.

The loss drops the Packers to 4-8 on the season and all but ends their scant playoff hopes. The Eagles improved to 10-1 with the win.

Here are 10 things we learned from the Packers frustrating home loss to the Eagles:

Running quarterbacks have hurt the Packers for a long time now and regardless of who their defensive coordinator has been and how talented the defense has been, the team has not been able to stop a quarterback who can run well.

Sunday night was no exception as Jalen Hurts ran for more than 100 yards before the first half was over and finished the game with 157 yards rushing on 17 carries. His long gain was 42 yards and he averaged 9.2-yards per carry.

Whether it was scrambles or designed running plays, the Packers defense had no answer for Hurts all game long and it cost them.

Unfortunately for the Packers defense, Hurts wasn’t the only player gaining large chunks of yardage on the ground Sunday night. Miles Sanders gained 143 yards on 21 carries and ran for two touchdowns. Heck, even backup runners Kenneth Gainwell and Boston Scott had healthy averages whenever they carried the football.

The Eagles gained 363 yards rushing as a team on 49 carries and averaged 7.4-yards per rush in this game. All four Philadelphia runners who had at least one carry in this game gained 10 or more yards per carry as their longest run.

NFL teams shouldn’t gain 363 yards on the ground in one game. That is usually reserved for college football games when national powerhouses beat up on weaker, non-conference opponents in games with scores like 56-3.

Injuries continued to mount for the Packers with safety Darnell Savage leaving the game on the third play from scrimmage with a foot injury. He did not return.

Quarterback Aaron Rodgers was already playing with a broken thumb but suffered an oblique injury in the third quarter. Rodgers tried to gut it out and played through the pain for a while but eventually left the game and gave way to Jordan Love.

With the team’s playoff hopes all but over, it may not make sense to risk further injury for Rodgers depending on how serious the new injury is.

Jaire Alexander left the game briefly and was booed loudly by the fans in Philadelphia when he returned.

Yes, it was a small sample size when the Eagles were trying to protect a lead, but Jordan Love looked very good in relief of Rodgers. Love was decisive and threw the ball with authority. He finished the game by completing 6-of-9 passes for 113 yards and a touchdown. That gave him a quarterback rating of 146.8.

Depending on Rodgers’ condition, the Packers may start Love next week in Chicago.

While it’s certainly too soon to get excited about Love’s performance, he certainly looked like a leader on the field, made good decisions and was effective. Now the Packers need to see what he can do with more reps as the team plays out the string down the stretch.

Keisean Nixon showed he is an exciting return specialist and in a very different way than his predecessor, Amari Rodgers. Amari Rodgers caused excitement because you never knew if he would hold on to the ball or would make an error in judgment.

Nixon sometimes makes questionable decisions but backs them up with long returns and seems to be a threat to break a long run any time he touches the football.

Nixon averaged 34.4-yards per runback on five kick returns including a 53-yard effort. It’s a mystery why he didn’t take over as the team’s primary punt and kick returner much sooner.

The Pack just couldn’t sustain long drives because they failed to convert third downs even though they averaged 5.0-yards per carry on the ground and A.J. Dillon had his best game in a long time.

Factors that hurt the Packers offense on third down included Rodgers’ injured thumb, inconsistent pass protection and the fact that the Pack was playing from behind for most of the second half.

Christian Watson continued to show more of the talent that made GM Brian Gutekunst trade up to grab him with the first pick of the second round in the 2022 NFL Draft. The rookie led the team with four catches for 110 yards and scored a touchdown for the third straight game, becoming the first Packers rookie to accomplish that since Billy Howton who caught a touchdown in his five straight games back in 1952.

Watson showed his elite speed on the 63-yard touchdown he caught from Love in the fourth quarter that got the Packers back to within one score.

If Watson continues to get more comfortable in the offense and works hard, he has elite talent and could become something special.

Throughout the game, Hurts and the Eagles offense picked on cornerback Rasul Douglas. Douglas struggled throughout the game and gave up some big plays including a 30-yard touchdown pass that saw him get turned around the wrong way and just beaten.

Douglas has not played as well this season as he did in 2021 but he’s far from along in that capacity on this team.

Douglas plays better on the perimeter than he did in the slot and hopefully, he can bounce back next week against the Bears.

The Packers signed edge rusher Justin Hollins this week off waivers and he had a solid debut in a Packers uniform. He was credited with two tackles, one sack, a quarterback hit and two tackles for loss.

The former Los Angeles Rams player made a good first impression and hopefully he can give the Packers some consistent depth on the edge in the final five games of the season.

Even if the Packers somehow win their last five games, the best they can finish this season is now 9-8. Last year, six teams in the NFL finished with nine wins and only two of them made the playoffs (and one of them was 9-7-1).

Green Bay would struggle to win many tie breakers as they have already lost to the Commanders, Giants and Lions and even if they win out, their conference record would be 7-5. The Pack would have to pass four teams in the standings to reach the playoffs.

Essentially, the Packers would need to win out and get some help to qualify for the postseason and it isn’t looking very likely.