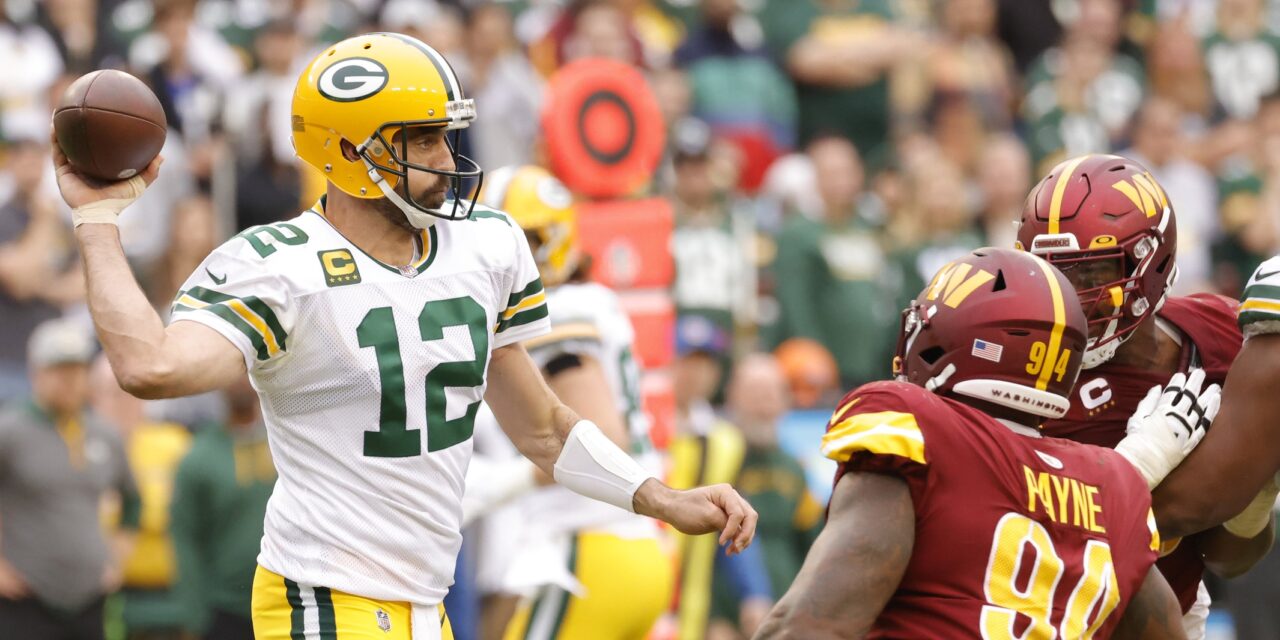 The Green Bay Packers lost another lead and lost another football game, falling to the Washington Commanders 23-21. The Packers have now lost three straight games for the first time since November of 2018.

The Packers offense gained only 232 total yards all game and failed to move the ball consistently.

The loss drops the Packers to 3-4 on the season while the Commanders improved to 3-4. The Packers are now below .500 heading into the toughest part of their schedule.

Here is a look at 10 things we learned from the Packers 23-21 loss to the Commanders:

No, it wasn’t all Rodgers’ fault, but he is hardly playing like a $50 million per year quarterback. Rodgers suffered a few drops, but he is also making inaccurate throws too often and just isn’t getting the job done when it counts.

He finished this game completing just 23-of-35 passes for 194 yards. His yards per attempt was an unacceptable 5.4.

The injured thumb may be hurting his accuracy, but Rodgers had more time to throw against Washington and still wasn’t connecting with his receivers.

He is hardly playing like a back-to-back league MVP, the type of player who lifts a team and makes them play better than they otherwise would.

Lip readers saw Rodgers saying, “What the bleep are we doing,” after the Packers failed to convert a fourth down. While he is far from the only problem, he needs to look in the mirror and fix his own game while also helping his teammates.

The Packers did change things up on the offensive line. They didn’t have David Bakhtiari available and they benched Royce Newman. The revamped unit was Zach Tom at LT, Elgton Jenkins at LG, Josh Myers at center, Jon Runyan Jr. at RG and Yosh Nijman at RT.

The results were better than the last two games but hardly spectacular. Officially, Rodgers wasn’t sacked and was only hit once.

Nijman struggled with holding penalties and the holes weren’t always there for the running game, but overall, considering they were missing Bakhtiari and had limited time to practice, the offensive line played OK against a talented Washington defensive line.

Amari Rodgers muffed a punt in the first half that Washington turned into their initial three points of the game. While his other returns were productive, his tendency to fumble and muff punts makes him a huge liability for the Packers special teams.

The Packers offense is struggling and they cannot afford to give away points or even field position because they have an unreliable punt returner.

Matt LaFleur and Rich Bisaccia need to find somebody else to return punts, even if they just fair catch every chance they get. There must be accountability.

The Packers offense is just not dangerous right now. Their longest drive of the game was eight plays for 48 yards and 27 of those yards came via penalties.

The Commanders were missing some of their starting receivers but they managed to find ways to scheme players open. The Giants did likewise two weeks ago with three receivers out of the lineup. Unfortunately, the Packers cannot seem to make the offense click this season.

Rodgers had more time to throw this week but they still couldn’t move the ball consistently. For the game, the offense scored just 14 points and one was on a drive helped by penalties.

The poor play of the offense gives the defense almost no margin for error.

Then, late in the game with the team down two scores, the Packers kept huddling and taking too much time off the play clock. Even though they scored a touchdown with just over three minutes left, they wasted precious time. Had the offense gone no huddle or hurry up, they could have had another minute or two to move the ball at the end of the game.

LaFleur is an offensive coach and the play caller. It is up to him and Rodgers to figure out how to make this offense efficient again.

The Packers have now lost three straight games but they held leads in two of them. They led the Giants 17-3 but lost. Now against the Commanders, the Pack led 14-3 after De’Vondre Campbell’s pick six in the second quarter and then gave up the next 20 points before losing the game.

The lost leads have been caused by a combination of untimely penalties and the inability to make in game adjustments and poor execution.

One of the biggest reasons is the offense can’t help the defense by maintaining possession. The defense tires and gives up just enough points for the Packers to lose. The Packers just aren’t playing complimentary football right now.

The Packers lost the time of possession battle 37:07 to 22:53 which is hardly a formula for winning games.

This team needs to show more heart, needs better execution and needs to play better situational football on both sides of the ball.

While Aaron Rodgers isn’t playing particularly well, his receivers aren’t doing him any favors either. There have been too many drops of catchable balls and nearly every receiver has been part of the problem.

Romeo Doubs, Allen Lazard and Sammy Watkins all had at least one drop.

The receiving corps is hurting with Randall Cobb and Christian Watson on IR and Lazard injured in this game.

The only highlight may have been rookie Samori Toure making his first NFL catch for four yards in the second half.

Simply put, the receivers need to play better and so does Rodgers.

Penalties hurt the Packers again against Washington. The team had nine penalties in the game for 69 yards.

When your offense is struggling, you can’t give the other team more chances with the ball and you can’t constantly put yourself in long-yardage situations on offense.

Washington had three first downs by penalty in this game while penalties derailed some Packers drives. Right now, the offense is not good enough to overcome these mistakes.

The costliest penalty cost the Packers a strip sack by Rashan Gary that led to a touchdown return by Rasul Douglas. A defensive holding call against Eric Stokes negated the touchdown.

The team needs to play smarter, more disciplined football if they want to win again soon.

Once again, the Packers neglected the running game on Sunday. For the game, Green Bay ran the ball only 12 times for 38 yards, a paltry 3.2-yard average. Their long run of the game was eight yards.

The Commanders came into this game ranked 25th in the league in rushing yards allowed per game and the opposition was gaining 4.6-yards per rush. The game plan logically should have included more running plays.

Since the Packers had a 14-3 lead, there was no excuse for them to not try to run the football more. But once again, LaFleur and Rodgers got away from the run and stayed away from it.

Third downs killed the Packers offense. For the game, the Packers went 0-for-6 on third down and 0-for-1 on fourth down. That is not a formula for scoring points or winning football games.

By contrast, Washington converted 7-of-16 third downs. That’s hardly outstanding but good enough to keep the chains moving enough to win the game.

Third downs separate the good teams from the average. 0-for-7 on third and fourth down conversions won’t get the job done.

The Packers are now 3-4 on the season with their next two games on the road. They have also lost three straight games

The Packers will be in Buffalo next week which is an elite opponent. This will be a critical week for the Packers and LaFleur needs to have his team ready to play.

After the game, LaFleur said, “I don’t think anybody thought we’d be in this spot that we’re in right now, and we’re going to find out what we’re made of.”

They better show more heart than this because it will be a long season if they don’t play better and soon.

Packers Defense Could Have An Unprecedented Starting Lineup