The Green Bay Packers came up with a key turnover in the final minute to clinch a 24-22 win over the Cleveland Browns at Lambeau Field. Rasul Douglas made his second interception of the game to end Cleveland’s final threat.

Aaron Rodgers threw for 210 yards and three touchdowns. In the game, he passed Brett Favre to become the Packers all-time franchise leader in career touchdown passes with 445. Davante Adams had 10 catches for 114 yards and two touchdowns while the Packers defense had four interceptions and five sacks.

With the victory, the Packers improved their record to 12-3 on the season and kept their hold on the top seed in the NFC playoff race.

Here are 10 things we learned from the Packers 24-22 win over the Browns:

Packers wide receiver Davante Adams is almost unstoppable right now. He and Rodgers have unbelievable chemistry and they made some very good plays in this game.

The back-shoulder play the duo made was almost impossible to defend. If the cornerback lines up inside, the throw goes back shoulder. If he lines up outside, Rodgers gets the ball to the inside and watches Adams gain yards after the catch.

Adams had two more touchdowns and continues to be the best receiver in the NFL right now. The Packers must find a way to re-sign him for next season.

Rodgers had another solid game despite aggravating his injured toe in the second quarter. A-Rod completed 24-of-34 passes for 202 yards and three touchdowns. That gave him a quarterback rating of 115.1 which is his lowest in the last three games.

Rodgers accuracy was clearly diminished in the second half due to the toe, but he still played a solid game and provided the Packers with gutsy leadership.

His first touchdown pass moved him into sole possession of first place in Packers franchise history with 443 career touchdown passes. He was tied with Favre entering the game and now stands alone with 445.

The Packers knew the Browns were a better running team than passing team yet they were unable to stop the Browns from moving the ball on the ground.

As a team, Cleveland gained 219 yards rushing and averaged 8.8-yards per rush. Nick Chubb led the way with 126 yards on 17 carries but D’Ernest Johnson had 58 yards in just four carries including a 30-yard run and Anthony Schwartz added 24 yards on two runs.

The defense did a poor job of staying in their lanes and they couldn’t keep contain consistently. The middle of the defensive line was often pushed back by a strong Cleveland offensive line that is not at full strength.

The Packers must do a better job of keeping disciplined and not allowing opponents to run so effectively.

The Packers offensive line did a good job of protecting Rodgers and the Packers quarterback was not sacked in this game. According to the official stats, the Browns registered four hits on Rodgers all game and for the most part, Rodgers had enough time to find his receivers.

The offensive line also managed to block well for the run as both A.J. Dillon and Aaron Jones had good holes to run through and averaged more than 4.6-yards per run.

The offensive line briefly lost left tackle Yosh Nijman to injury and Ben Braden stepped in to replace him. Nijman was able to return. Even though the team has only one opening day starter in the lineup right now along the line, Adam Stenavich’s group continues to find ways to play effectively.

The Packers defense put pressure on Baker Mayfield throughout the game. The Packers had five sacks led by Rashan Gary who had two. Preston Smith, Tipa Galeai and Dean Lowry added one each.

Even when the Packers didn’t register sacks, they did get Mayfield off his rhythm at times and the result was six quarterback hits, many pressures and four interceptions.

The Packers were able to take advantage of a banged up Cleveland offensive line.

The defense allowed too many yards over the course of the game, but they made just enough big plays to help the team win. Douglas made two of the team’s four interceptions with Chandon Sullivan and Darnell Savage getting the other two.

Douglas continues to play outstanding football. Not bad for a guy who the Packers plucked off the Cardinals practice squad in early October. He anticipates where the ball is going to go well and is almost always in the right place to make plays.

While relying on big plays may not be a long-term strategy for defenses, the Packers defense did make just enough of them to help the team win this game.

The Packers have struggled at special teams all season but today, the unit was effective enough. They were not spectacular, but the coverage teams were effective and the unit did no harm to the team in any measurable way.

The Browns punt returners averaged just 20.8-yards per return and the punt returners 8.7. Meanwhile, Amari Rodgers had a 27-yard kick return and a nine-yard punt return where he fielded the ball cleanly and moved directly upfield to pick up as many yards as possible instead of running east-west and losing ground or inviting a penalty.

Mason Crosby made all three extra points and his only field goal attempt while punter Corey Bojorquez had four good punts out of five and placed the ball inside the 20 once as well.

The special teams held their own and Maurice Drayton’s unit made progress.

Packers coach Matt LaFleur did a poor job of using and managing his replay challenges. The Packers used their first challenge late in the first quarter when the Browns converted a 4th-and-1 pass from Mayfield to Donovan Peoples-Jones. It was close, but Peoples-Jones made the catch. The catch was upheld and the Packers were down to one more challenge. The coaches in the booth upstairs should have told LaFleur not to challenge that play after viewing the replay.

Once the Packers lost their first challenge, they had to be careful with their next one. Instead, they used it on their opening drive of the second half on a near-catch by Juwann Winfree. The call was a close one, but the gain was not a long one and although it would have been great to see Winfree get the catch, the Packers had 27:46 left on the clock and were unable to challenge any more plays.

Even if the catch was allowed, the benefit wasn’t big enough to justify playing nearly the entire second half without a challenge and to lose a potentially crucial second half timeout in what ended up being a close game.

The coaching staff needs to look at the big picture when throwing the red challenge flag and not challenge calls based on knee-jerk reactions.

Whether it was due to Rodgers’ injured toe or good play by the Browns defense or a little bit of both, the Packers offense stopped gaining yards after their opening drive of the second half. The Pack kicked a field goal on that drive, but in the fourth quarter, the Pack gained only 31 yards on offense and picked up only two first downs, one of which was by penalty after the final interception.

The Packers had their chances to put together long drives and put the game away but they let the Browns hang around and nearly blew it.

Against a contending team, this could be disastrous in the playoffs.

Inside linebacker De’Vondre Campbell had another strong game in the middle of the defense. He led the team with 13 total tackles and did a good job of not allowing many yards after the catch when passes were completed to his area.

Campbell also broke up a pass and did a great job of diagnosing a screen pass on another play. The former University of Minnesota star has been a vital addition to the Green Bay defense this season. 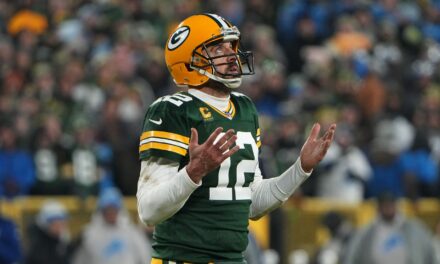