The Green Bay Packers overcame a slow start and some horrendous special teams plays to defeat the Chicago Bears 45-30 at Lambeau Field.

Aaron Rodgers threw for 341 yards and four touchdowns, Davante Adams had 10 catches for 121 yards and two scores while Rasul Douglas had his second pick six of the season.

The win increased the Packers record to 10-3 on the season and reduced their magic number to one game to clinch the NFC North division title.

Here are 10 things we learned from the Packers win over the Bears:

What more can you say except facing the Bears brings out the best in Rodgers. He finished this game with a quarterback rating of 141.1, just shy of a perfect rating.

After failing to move the ball on the team’s first two drives, Rodgers led the Pack to touchdowns on four of the team’s next five possessions and points on five of the next six.

Despite his injured toe which clearly limited his mobility and his ability to throw with proper form, he still completed 29-of-37 passes for 341 yards, four touchdowns with no interceptions.

Even when the Packers fell behind in the first half, Rodgers remained calm and collected and simply did Rodgers things.

Yes, he still owns the Bears as the Packers completed another season sweep of the Packers oldest rivals. Green Bay has now won 11 of the last 12 meetings between these two teams.

For the second straight game, Douglas had a pick-six. This one came in the second quarter with the Packers trailing 10-7. The veteran corner timed Justin Fields’ pass perfectly, stepped in front of the receiver and was off to the races on a 55-yard interception return for a touchdown.

Douglas also broke up two passes and was in on two tackles but his ability to make big, clutch plays continues to benefit the Packers defense.

Like the rest of the Packers offense, Adams struggled in the first quarter, but by the end of the game, he had 10 catches for 121 yards and two touchdowns.

His touchdowns highlighted what Adams does so well. His first scoring catch was a 38-yard strike from Rodgers in the final minute of the half that got the Packers to within 24-21. He used his speed and route running precision to get open on that play and then made a great catch for the score.

The second touchdown catch was shorter but no less impressive. Adams made a fake that froze the defender for a second and made the three-yard touchdown pass look so easy. That was the dagger that put the Packers ahead 45-27.

Adams is on top of his game and he got all of this done despite playing through a hamstring injury.

The Packers need to figure out how to re-sign him before he becomes a free agent next offseason.

Just when you thought the Packers special teams units couldn’t possibly struggle any more, they found a way to get worse.

The Packers biggest gaffe was a 97-yard punt return by Jakeem Grant that saw the coverage team get sucked inside which created a wide-open lane for the return man to score.

The Packers also kicked off out of bounds, allowed the Bears to recover an onsides kick and allowed a 42-yard kick return.

It could have been even worse as Amari Rodgers muffed a punt that was recovered by the Bears but that play was nullified by a penalty.

The Packers offense and defense were clearly superior to the Bears units over the course of this game, but the special teams played so poorly that it allowed Chicago to stick around.

Against a mediocre team like the Bears, you can get away with this but try doing that against contenders like the Rams, Cardinals, Cowboys or Bucs in the playoffs and it could be enough to cost the Packers a trip to the Super Bowl.

Three of the Packers “other” receiving targets had very strong games against the Bears. Allen Lazard finished with six catches for 75 yards and a touchdown and gained 14 yards on an end around. The Packers went to Lazard early in the game and he came up with solid performance in the absence of Randall Cobb.

Tight end Josiah Deguara had three catches for 44 yards but many of those catches netted the team key first downs and kept drives alive.

And then the “Big Dog,” Marcedes Lewis had a strong receiving day in addition to his usual blocking responsibilities. Lewis finished with four catches for 51 yards and made would-be-tacklers bounce off him when they tried to bring him down.

Without Cobb and the other tight ends and receivers who were injured during the game, the team needed these players to step up. They all produced when called upon.

While the Packers entered this game thinking about getting their injured players healthy enough to return, they lost some more players during this game. The seriousness of these new injuries is not yet known but the team will almost certainly update things early this week.

Starting right tackle Billy Turner left the game early after he had his leg rolled up on and he did not return. Turner has provided the Packers with strong and steady play at right tackle and if he’s out, the team is without four of their intended starters along the offensive line including Turner, David Bakhtiari, Josh Myers and Elgton Jenkins.

The offense still managed to score a season-high 45 points (OK, 39 if you count the pick six) and to protect Rodgers, but the injuries just seem to be piling up week after week.

The Packers got consistent pressure on Fields throughout the game although the rookie from Ohio State managed to scramble and gained 74 yards on nine rushing attempts although much of it came in garbage time.

Preston Smith registered both sacks for the Pack in this game. One of them was a strip sack that was recovered by Rashan Gary and led to a touchdown by Aaron Jones that put the Packers ahead 35-27. It was a huge play in this game.

The Packers were credited with nine hits on Fields in this game including three by Preston Smith and three by Kenny Clark who had another strong game against the Bears overmatched center.

The Packers defense continued to get burned on some big plays in this game for the third straight game. Fields had touchdown passes of 46 and 54 yards in this game.

One of those touchdowns was almost an instant replay of one scored by Justin Jefferson of Minnesota in which the Bears lined up the receiver in the backfield to create a mismatch against Henry Black.

The defense must clamp down on these big plays before the playoffs get underway.

Aaron Jones still isn’t 100 percent but A.J. Dillon has more than picked up the slack. The former Boston College star led the Packers with 71 yards on 15 carries for a healthy 4.7-yard average.

Once the Packers took the lead in the second half, they kept feeding Dillon the ball and he kept the chains moving by running through and over Bears defenders who had trouble tackling him one-on-one.

Dillon is a great weapon to have, especially in the cold of a Green Bay winter. He and Jones continue to compliment each other very well.

Sure, it was two token kneel downs in victory formation at the end of the game, but it was great to see backup quarterback Kurt Benkert take two snaps in this game.

Benkert was elevated from the practice squad when Jordan Love was placed on the Covid-reserve list. This was his first regular season NFL action.

The former Virginia star had a long road to the NFL after going undrafted in 2018. He spent time on the Falcons practice squad and injured reserve, was elevated for one game last year but did not get to take a snap.

Now, after four years of hard work and dedication, he finally got on the field. That was great to see. 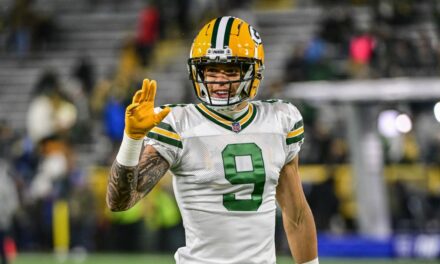