Ten Things You May Not Know About Packers OT David Bakhtiari

Packers left tackle David Bakhtiari is one of the more popular players on the team. He’s been with the team since the Packers drafted him in the fourth round of the 2013 NFL Draft.

The Packers are hoping Bakhtiari returns to start at left tackle after playing in only one game last season due to injury.

Here is a look at 10 things you may not know about Bakhtiari as we enter the 2022 season:

David’s brother, Eric Bakhtiari is seven years older than the Packers offensive tackle. He played his college football at San Diego but was undrafted in 2008.

He also spent time on the practice squad or in training camp with the Chargers, Bucs, Dolphins and Chiefs.

From the first game of his rookie season, Bakhtiari was the starter at left tackle for the Packers. He was the first rookie to start opening day at left tackle since Ken Ruettgers did that in 1985.

Originally, the Packers wanted Bakhtiari to compete for a job at right tackle but Bryan Bulaga was injured and lost for the season during the team’s Family Night scrimmage in August. The coaching staff then moved Bakhtiari to left tackle and he won the job.

He has never relinquished it when healthy since that first game of the 2013 season.

In 2020, he earned both Pro Bowl and All Pro honors in his last healthy season to date. He is widely considered the best pass blocking tackle in the league today and has been protecting Aaron Rodgers’ blind spot since 2013.

While he only played 27 snaps last season, Bakhtiari has been remarkably healthy and durable prior to the 2021 season. Before that, he had never played fewer than 10 games in any of his first eight NFL seasons and five times he played a full 16 games.

The Packers are hoping he can return to that form now as he turns 31 in September.

Bakhtiari is a fun-loving guy and loves to chug beers in the stands at Milwaukee Bucks games and other sporting events. He has become a social media sensation as a result of his ability to polish off a complete beer in a few seconds to the delight of the crowd in the arena.

Bakhtiari made a cameo in the 2015 film “Pitch Perfect 2” and played himself. He appeared in the film along with teammates Don Barclay, Josh Sitton, T.J. Lang and Clay Matthews.

The film was a box office success and a sequel to the 2012 film, “Pitch Perfect” starring Anna Kendrick and Rebel Wilson.

Bakhtiari was a late bloomer as a football player. In fact, he didn’t start at any level of football until his senior year at Junipero Serra High School in San Mateo, California. He helped his team reach the state semi-finals that year.

He was only considered a two-star prospect coming out of high school but did get a scholarship offer from Colorado (where he eventually attended) and several other schools.

In his first season with the team back in 2013, Bakhtiari became the first Packers left tackle to start every game that season as a rookie in more than 30 years. The last player to do that was Mark Koncar who accomplished that back in 1976 when the NFL still played a 14-game schedule.

Koncar was the Packers first-round pick in 1976 and started at left tackle for the team for five seasons when he was healthy.

Bakhtiari was the ninth offensive tackle selected in the 2013 NFL Draft. Among the eight players picked ahead of him were Dallas Thomas, Menelik Watson and Luke Joeckel.

None of the eight tackles selected ahead of him surpassed Bakhtiari’s accomplishments after the draft. 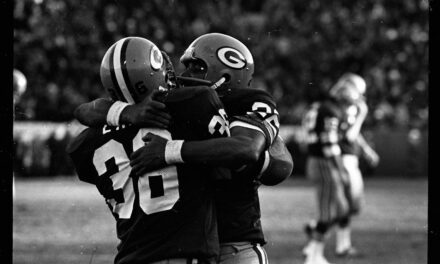