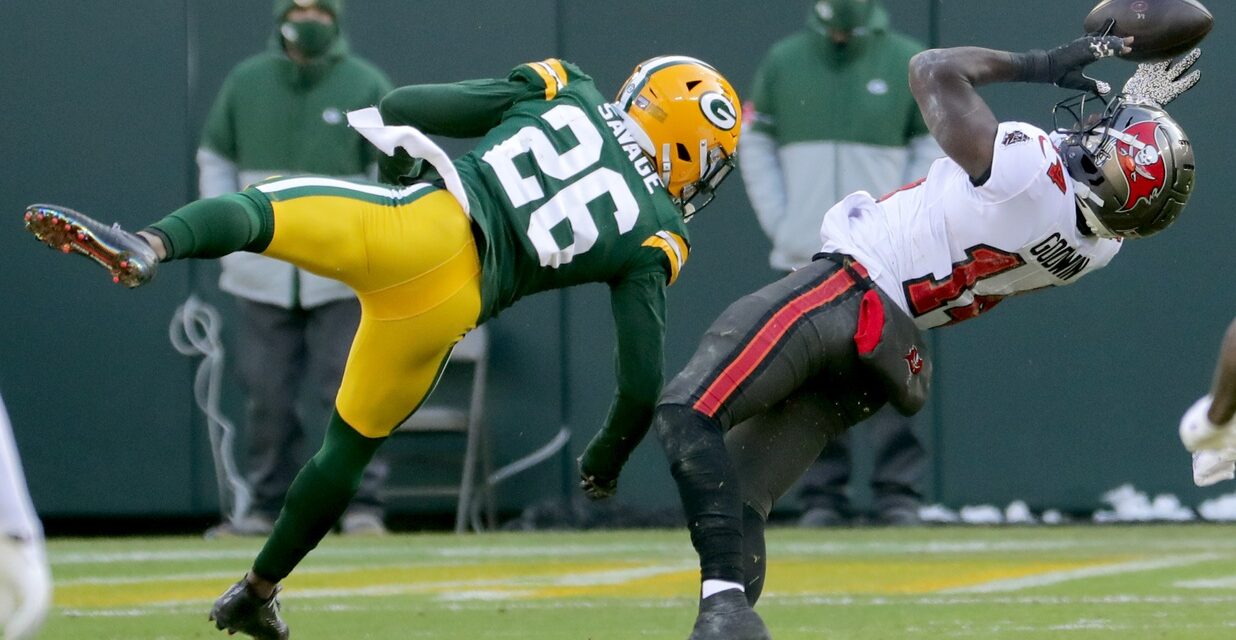 The Green Bay Packers have struggled through the first half of the 2022 season and there are plenty of reasons for the team’s disappointing start. There have been decisions made by the general manager that didn’t work out as planned, coaching philosophies and play calls that can be questioned and disappointing performances by too many players.

One player who has been a major disappointment this season has been safety Darnell Savage. Unfortunately, after the Packers made a commitment to the former Maryland star by picking up his fifth year option, his play has regressed to the point that he is a serious liability for the Green Bay defense.

Savage got off to a solid start with the Packers. He earned All-Rookie Team honors in 2019 after intercepting two passes and making 55 total tackles in 14 games during his debut season in the NFL.

His best season was 2020. During the first half of the year, Savage was good, but in the second half of that campaign, he and Adrian Amos combined to give the Packers elite safety play. Savage had a career-high four interceptions that season, recorded a sack and recorded 75 total tackles, a number he has never matched since then.

In the final eight games, Savage showed even more of his potential. He was able to make hits at or near the line of scrimmage on runs and short passes. He recovered a fumble and recorded a sack and was a better player around the ball. Amos’ ability to be in the right position consistently allowed Savage to take chances and the second-year player took advantage of many of them to make plays.

In 2020, opposing quarterbacks completed just 56.4 percent of their passes when throwing to receivers covered by Savage and has a quarterback rating of 67.3 according to pro-football-reference.com. But in 2021, those numbers dropped to a 64.9 percent completion percentage and a quarterback rating of 117.4. The big plays decreased and Savage looked more tentative and less confident in where he needed to be on the field. The defense gave up more big plays.

During the past offseason, GM Brian Gutekunst elected to exercise the Packers fifth-year option on Savage. That guaranteed him a salary of $7.9 million in 2023. Gutekunst chose to overlook the drop in Savage’s performance and figured he would be more comfortable in Barry’s defense in year two and have a bounce back season.

Unfortunately, that hasn’t happened. Savage has been even worse this season statistically. Opposing quarterbacks are completing 63.2 percent of their passes when throwing to receivers covered by Savage and their quarterback rating is 121.4. Savage has no interceptions and has broken up just one pass through the first eight games of the season. Last year, in 17 games, he broke up nine.

Worse yet, Savage has had difficulty making tackles. He was credited with three missed tackles in the game against the Bills alone and made an embarrassing effort when trying to bring down Buffalo quarterback Josh Allen by merely extending a forearm. The 6’5”, 237-pound mobile quarterback just blew by Savage and ended up gaining 20 yards on the play. He was tackled on the Packers one-yard line and the Bills scored a few plays later.

Packers head coach Matt LaFleur admitted that Savage has “got to be better in those situations.”

The Packers now face a tough dilemma with Savage. He has become a liability for the team with his poor play. Should the Packers turn to backup Rudy Ford to replace Savage? Ford is known primarily as a special teams ace and has played only 64 defensive snaps so far this season. Still, his Pro Football Focus grades are significantly better than Savage’s and the starter is presently ranked near the bottom of the 87 safeties ranked by the site.

The Packers need more from Savage than what he’s given them this season. The team is stuck with him for 2023 unless they can find a team willing to trade him during the offseason.

Getting better play from Savage would go a long way to improving a defense that has not met the high expectations set out for it before the 2022 season got started. There is still half a season to go but the Packers need a better effort and performance from their former first round pick.