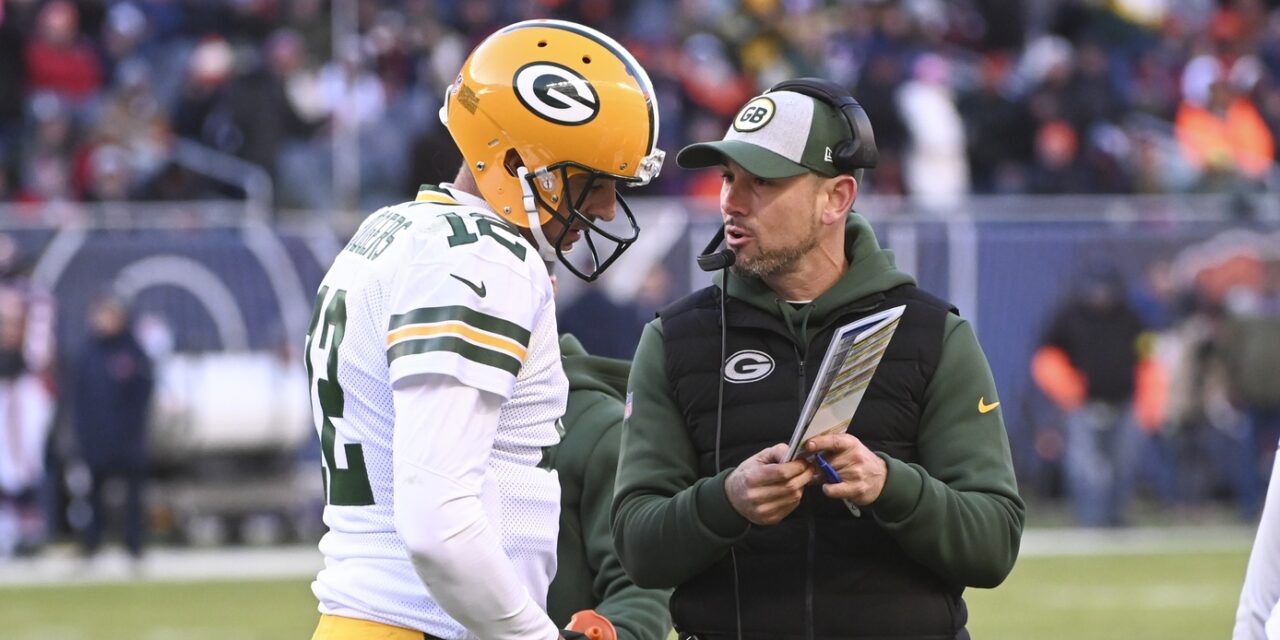 The Green Bay Packers are 5-8 and their playoff hopes are still alive coming off their bye week. The Packers will need to win their final four games and get some help to qualify for the postseason. It’s a long shot but still possible.

But the first thing the Packers need to do is overcome an issue they’ve had in their first three seasons under Matt LaFleur: playing poorly in the game following their bye week.

The Packers played two of their worst games under LaFleur coming off the bye week despite having an extra week to prepare. Unless that changes against the Rams at home on Monday night, the Pack will be likely eliminated from the playoff hunt.

It all started in LaFleur’s first season as coach of the Packers in 2019. The Pack entered their Week 11 bye with an 8-2 record, fresh off a 24-16 win over the Carolina Panthers. They were heading west to face the San Francisco 49ers in Week 12 on a Sunday night game that was nationally televised.

This was a showdown game. The Niners came in with a 9-1 record and the winner would have the inside track at home field advantage throughout the NFC playoffs that year.

But the Packers didn’t come ready to play. After a penalty wiped out a first down on the team’s opening drive, Aaron Rodgers was sacked and fumbled giving the 49ers the ball at the Packers eight-yard line. On the next play, San Francisco scored their first touchdown of the game and led 7-0.

The Packers were never in sync in this game. Rodgers was sacked five times and threw for just 104 yards on 20 completions.

LaFleur was outcoached as the Packers went a paltry 1-for-15 on third down tries and just 1-for-3 on fourth down conversions.

“There wasn’t a whole lot positive tonight,” Rodgers admitted after the game. “A lot of the stuff we talked about during the week, eliminating negative yardage plays, obviously we didn’t do that.”

The Packers lost this game and the top seed in the NFC and then lost again badly to the 49ers in the NFC Championship Game.

In 2020, the pattern repeated itself. The Packers bye came early that year, in Week 5 after the team got off to a 4-0 start. After a week off, LaFleur and his coaching staff had two weeks to prepare for Tom Brady and the Tampa Bay Bucs on the road in Florida.

The Packers got off to an early 10-0 lead before Rodgers threw two interceptions in the second quarter including a pick-six. The Packers gave up 28 points unanswered points before halftime and never managed to get back into the game, losing 38-10.

Rodgers was sacked four times and completed just 16-of-35 passes for 160 yards and had a quarterback rating of just 35.4.

Bucs running back Ronald Jones II ran 23 times for 113 yards and two touchdowns while the Green Bay offense gained just 201 yards for the entire game and scored no points after the first quarter.

Again, the Packers did not seem emotionally ready to play this game and they were outcoached throughout. The team fell behind and could not make changes to get back into the game on offense or on defense.

In 2021, the Packers finally won a game after their regular season bye under LaFleur. Like this year, the bye came late, in Week 13. They beat the Bears at Lambeau Field 45-30 on Sunday night.

The Packers overcame a slow start and scored 24 unanswered points in the second half to cruise to a win. Since the Packers were facing the Bears, Rodgers was on his game, throwing for 341 yards and four touchdowns.

Of course, the Packers had a week off before their divisional playoff game against the 49ers last January and they played poorly in that game too, but we’re concentrating more on the regular season here.

There is no longer any room for error if the 2022 Packers are going to qualify for the playoffs. LaFleur and the coaching staff will have to get the team ready to defeat the Rams on Monday night and then win another three games to keep their chances alive. That means overcoming the issues they’ve had after bye weeks in the past and playing their best football of the season. We’ll soon see if they’re equal to the task.