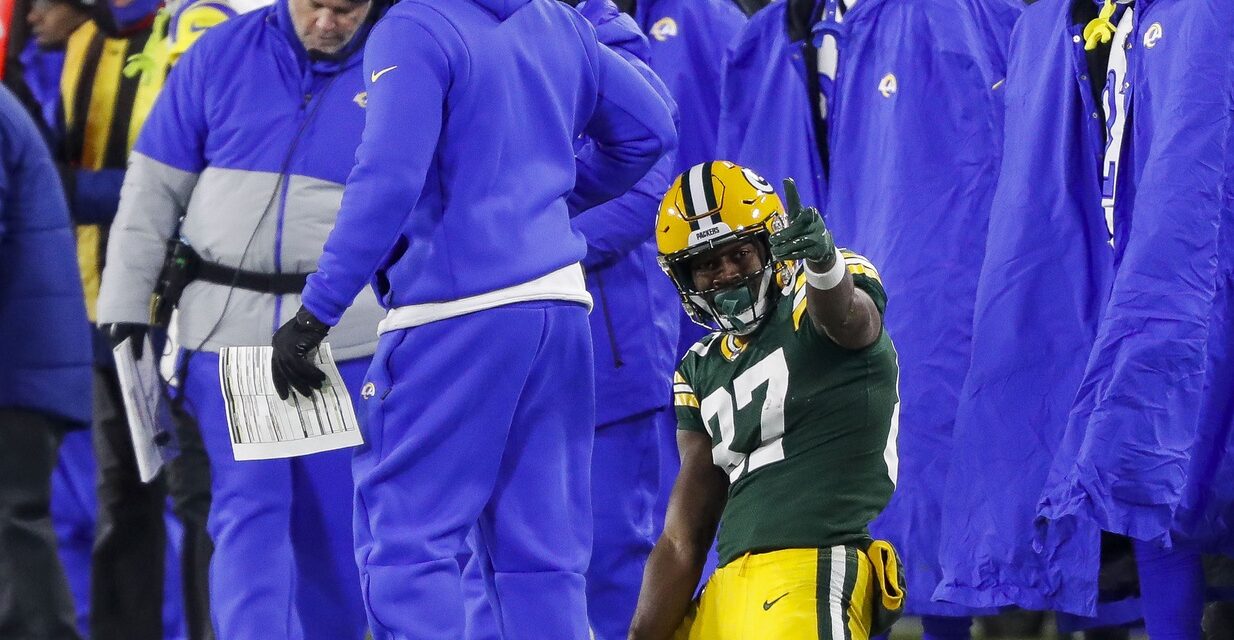 The Green Bay Packers have had a disappointing season and are still clinging to slim playoff hopes with three games left in the season. But there are reasons for optimism and one of them is the recent improved play from members of the team’s rookie class.

Both the team’s first round picks are being more productive in recent games. Linebacker Quay Walker made good use of his speed against the Rams and continues to put himself in better position to make plays as he learns the defense and gets more comfortable in the system. Walker had a sack, a tackle for loss and broke up two passes against the Rams and forced a fumble. Walker’s confidence is clearly growing and he has made more plays in the last four games.

Devonte Wyatt also is seeing more action in recent weeks. He recorded his first half sack against the Rams and is beating blockers to penetrate and make plays. The former Georgia star is still not starting but he’s gradually getting noticed more often when he is on the field and showing flashes of the talent that made him a first round pick.

Wide receivers Christian Watson and Romeo Doubs are also looking more comfortable in the offense and are assuming larger roles. Rookie wide receivers have traditionally struggled in the complex Packers offense. Quarterback Aaron ZRodgers has more than 30 hand signals that he uses at the line of scrimmage that are not even in the team’s playbook. He has traditionally been slow to trust rookie wideouts and the more complicated route trees in the NFL as compared to college make it a particularly difficult position to thrive at as a rookie. But we are seeing Doubs and Watson emerge as quality starters as their season goes on.

Since the Dallas game, Watson has become the most dangerous deep threat on the roster and he scored eight touchdowns in four games, a streak that ended against the Rams. Watson’s size and deep speed make him a challenge for defenders to keep up with and helps open opportunities for other receivers running medium or short patterns. He has also scored two touchdowns on end arounds and is a threat to score any time he touches the football.

Doubs returned to the lineup on Monday night after missing four games and finally, both he and Watson are healthy and more comfortable in the offense. Doubs led the Packers with five catches against Los Angeles and has earned the trust of Rodgers. He has good hands and runs precise routes and has an excellent work ethic. The duo of Watson and Doubs can be the future of the team at wide receiver going forward.

Fourth round pick Zach Tom started at left tackle again against the Rams as David Bakhtiari continues to recover from his emergency appendectomy. Tom has started games at both guard and tackle, often on short notice. The last two games, he did a very good job of protecting Rodgers’ blindside. He has graded out better as a pass blocker than a run blocker although he made some very good blocks for both Aaron Jones and A.J. Dillon against the Rams on Monday night.

Fifth round pick Kingsley Enagbare became a starter for the Packers after Rashan Gary was lost for the season with a knee injury. The former South Carolina star recorded a sack against the Rams which gives him three for the season. He also had a tackle for loss.

Enagbare is still inconsistent, but each week he seems to make an impact play and he is getting into better position to make plays as he gains experience in the defense. To get this kind of productivity from a fifth-round rookie is impressive, especially considering he was thrust into starting duty unexpectedly in the middle of the season.

All these rookies have yet to reach their full potential. They should all continue to develop and take on bigger roles as they learn more about what it takes to succeed in the NFL and get more comfortable with their teammates and in the offense and defense.

These players help make the Packers future potentially brighter for the rest of this season, in 2023 and beyond.