The Green Bay Packers made it official on Tuesday and used the franchise tag on wide receiver Davante Adams. But what exactly does that mean and what will likely happen between now and the July 15th deadline to sign Adams to a long-term deal?

Here is a look at what to expect in the coming months regarding Davante Adams and the Packers.

If Adams plays under the franchise tag, he will have a one-year contract worth approximately $20.1 million. If that is the outcome, this would be a lose-lose for both Adams and the team. Adams would have no long-term security and no signing bonus for this season and if he suffered a serious injury, it could prevent him from signing a lucrative, long-term deal next offseason.

Adams would have no real leverage under those circumstances. He would only have two choices, play for the Packers under the one-year deal or sit out the season. In short, this would not make Adams a happy man.

This would also not please the Packers front office. While they may have Adams’ services for one season, an unhappy All Pro receiver could hurt the atmosphere in the locker room and the Packers would not know whether they would have Adams on their roster after 2022.

The big obstacle facing both sides is working out that long term deal. Adams has said he wants to be the highest paid wide receiver in the NFL and the Packers have also said they want to make that happen so they can retain his services.

But there’s a catch. Right now, Arizona’s DeAndre Hopkins is the highest-paid receiver in the league and he is earning $27.3 million per season. But that number is part of the extension he signed, not the average over the length of his entire contract. The Packers are willing to top the annual average salary over the entire course of Hopkins’ deal while Adams and his agent want to be paid more than the annual value of the extension.

Negotiations on an extension started before the 2021 season began but were suspended during the season. They resumed last month but reports indicated that they were “not making a lot of progress” and so GM Brian Gutekunst “reluctantly” used the franchise tag on Adams. That is the first time the Packers have used the franchise tag in more than a decade.

The fact that Aaron Rodgers announced he was returning to the Packers on Tuesday certainly helps increase the chances that Adams will sign a long-term deal with the team. Rodgers and Adams are both among the best in the league at their respective positions and they help make each other better.

The duo has a unique chemistry on the field that comes from playing together for so long. A glance or a nod is often all that is necessary to change a play at the line of scrimmage and when plays break down, the duo is almost always able to read each other and adjust on the fly while remaining on the same page.  They also have a friendship off the field.

With Rodgers staying in Green Bay, Adams knows he can continue to accumulate excellent numbers going forward if he remains with the team and that he doesn’t have to adjust to a new quarterback or a new offensive system or playbook. That also increases his chances of making the Pro Football Hall of Fame after he retires, something he is on pace for thus far and can reach if he puts up a few more elite seasons.

If a new contract cannot be worked out, the Packers could still decide to trade Adams before the start of this season, but that is much less likely now that Rodgers has announced his return and the Packers are going to be “all-in” to try to win a Super Bowl in 2022.

A new, long term deal is a win-win for the Packers and Adams. It gives the team some badly needed cap relief for 2022 and helps lock up one of the game’s best receivers for the foreseeable future. After tagging Adams, the Packers are roughly $46 million over the salary cap. While Rodgers’ new deal will lower that number substantially, the Packers will still have to restructure some contracts and possibly release some players to get under the cap before the start of the new league year which begins next week.

For Adams, a lengthy contract allows him to give him and his family long-term security. Because Adams will turn 30 before the end of the 2022 season, this may be the last realistic chance he has to sign a huge deal while he is still in his prime for maximum money.

There is still a lot of uncertainty surrounding the Packers and how they will get under the salary cap this offseason. But the good news for Packers fans is that both Rodgers and Adams are likely returning in 2022 and that gives the team two All Pro performers that help make the Green Bay offense one of the most dangerous in the league. 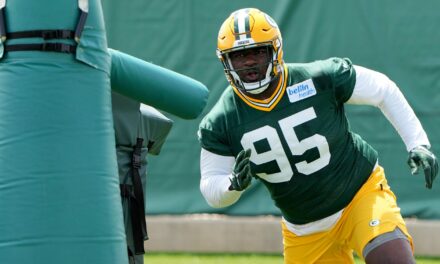