In recent years, we’ve seen a pattern from Green Bay Packers quarterback Aaron Rodgers and head coach Matt LaFleur. Rodgers barely plays in the preseason or sometimes he hasn’t played at all. Last year, he skipped both voluntary OTAs and mandatory OTAs while trying to decide his future with the Packers.

In the past, giving Rodgers a light workload during training camp and the preseason made sense. Rodgers entered 2021, for example, with a cast of familiar characters. He had experience with Davante Adams, Randall Cobb, Allen Lazard, Robert Tonyan, Marquez Valdes-Scantling and even Equanimeous St. Brown. Losing reps in the preseason or training camp was not so vital for the timing of the offense. There was no need to risk injury to Rodgers and the reigning MVP needed minimal preparation to get ready for the upcoming season.

It also benefitted Jordan Love who didn’t have the benefit of OTAs and preseason games during his rookie year because of the Covid-19 pandemic. Giving Love more reps in OTAs, training camp and during the preseason were important for Love’s development and gave him a chance to work with the first team offense.

But Rodgers is a player who is looking to win another Super Bowl. He led the Packers to a championship after the 2010 season, but that was 12 years ago now. Like it or not, the fact that one of the greatest quarterbacks of all time has only won one Super Bowl is a part of Rodgers’ legacy just as it was for Peyton Manning until he won a second title late in his career.

On one level, holding Rodgers out of the preseason and limiting his participation in OTAs made sense. Rodgers has experience and has demonstrated he doesn’t need a lot of practice time to be effective. That was further demonstrated by Rodgers winning the NFL MVP again last year despite his decision not to participate in OTAs, not playing in the preseason and not practicing for several weeks later in the 2021 season because of his injured toe.

But things are different this year and Rodgers and LaFleur need to change their plans for the coming offseason. Adams is now with the Las Vegas Raiders. Valdes-Scantling will play for the Chiefs this season. That means the Packers will be without two of their top three wide receivers from a year ago.

While we don’t know who will be on the roster when the season starts, we do know Rodgers will be throwing to at least a couple of new receivers and that those players will play a substantial role in the offense. Whether Gutekunst signs a moderately-priced free agent, acquires a wideout in a trade or adds one or more players in the draft, the Packers will have new players to integrate into the offense.

We know the history of Rodgers and how it hasn’t always been easy for him to develop chemistry with new receivers. At times, this has cost the Packers on the field.

Rodgers announced he was returning to Green Bay for the 2022 season and possibly beyond. But Rodgers will be 39 in December and he is, as he said more than a year ago, on the “back nine” of his career. So, if AR-12 wants to really win another Super Bowl before he retires, he needs to make sure he speeds up the process of developing trust with his receivers before the start of the new season.

That should include attending and participating in both voluntary and mandatory OTAs to work with draft picks and new acquisitions. It may involve playing a little bit more in preseason games to improve his timing under game conditions and maybe even inviting some new and returning receivers to attend informal workouts and practice sessions to get comfortable with Rodgers as quickly as possible.

If Rodgers is serious about winning another championship before he retires, this is the least he can do. The two-time reigning NFL MVP must put in the work and show his dedication to winning another title. It will not be easy to replace Adams, but the Packers offense can still be elite in 2022 if the team works together to get their timing down this offseason so the new players are integrated into the offense.

It will take hard work and dedication by Rodgers and the rest of the team, but it can be done. The challenge awaits. 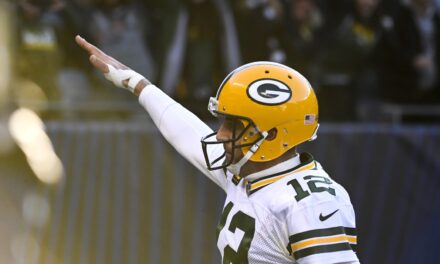