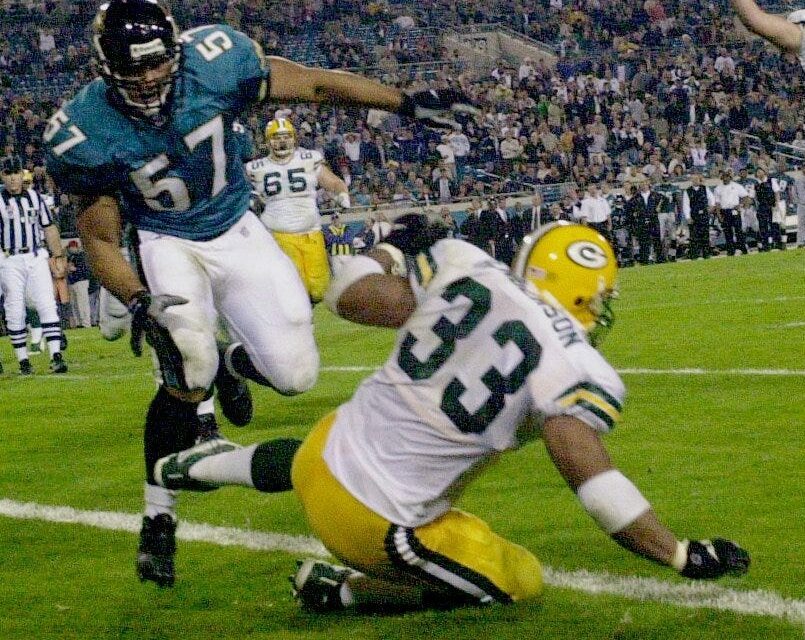 Fullback was not considered a glamorous position in the NFL when William Henderson played but the Green Bay Packers fullback managed to earn the respect of his teammates, coaches and fans during his 12 years playing that underappreciated position.

Henderson had a remarkable career with the Packers. Although he never had more than 39 rushing attempts in any season, Henderson exceled as a blocker and receiver and cleared the way for nine one-thousand plus yard runners in his dozen seasons with the team.

Henderson worked hard without getting much recognition for most of his career but in 2004, the former North Carolina star got noticed when he was named as the Pro Bowl fullback for the NFC and earned All Pro honors. It was a long overdue honor for a career that was built by doing little things the right way.

“I think William Henderson is one of the most unheralded guys on our football team,” Packers head coach Mike Sherman told the Wisconsin State Journal in 2001. “He can catch the football and he can run people over. He does his job quietly and effectively. And then, every once in a while, he makes a big play.”

“William doesn’t get enough respect for what he does for us,” quarterback Brett Favre added. “He catches the ball as well as anyone on our team.”

Henderson admitted his job didn’t earn him much attention from fans and the media, but he took pride in doing things the right way. He described himself as “a battering ram. That’s what my job was and that’s what I did to the best of my abilities. And I did it well, for years. Again, a lot of people didn’t understand why I was so passionate of doing it that way. For me, it was fun. … A job done well is a job you can be proud of.”

Henderson became a starter in his second NFL season which also happened to be the year the Packers won their first Super Bowl in 29 years. Henderson started all three playoff games for the team that year and caught two passes in their win over the New England Patriots in Super Bowl XXXI.

“In his 10 years, I don’t think you can find a guy from across the league who has been as consistent and reliable as he has,” Favre told the Milwaukee Journal Sentinel in 2004. “He just does his job every day. He never misses practice, and he’s got one of the most difficult jobs in football, if not the most difficult — and probably the most underrated. All you do is go in and blow up linebackers. And occasionally you get a crumb and they throw the ball to you.”

Henderson’s first NFL head coach, Mike Holmgren added, “William gives us a sense of toughness. He sets a little tone for our offense.”

Henderson finished his career with 123 rushing attempts for 426 yards and five touchdowns. He also caught 320 passes for 2,409 yards and 14 touchdowns. His best receiving season came in 1997 when the Packers reached the Super Bowl for the second consecutive season. Henderson caught 41 passes for 367 yards, both of which were career highs.

By the time Henderson started playing for the Packers, fullbacks were no longer a team’s primary ball carrier. In fact, Henderson was one of the leaders of a new breed of fullback who served as a lead blocker and an outlet receiver.

Henderson exceled in both roles. As a receiver, Favre always knew if everyone else was covered, he could find Henderson underneath and turn a potential loss or incomplete pass into a gain of six or seven yards. He also knew that Henderson would be reliable at picking up blitzers and pass rushers who got past the offensive line and came at the quarterback.

During Henderson’s time with the Packers, Edgar Bennett, Dorsey Levens and Ahman Green all went over 1,000 yards rushing in a season. In 2003, Green set a Packers franchise record with 1,883 yards and he ran for 15 touchdowns. There’s no way he reached those milestones without the lead blocking of Henderson.

Henderson did his job without seeking attention. “Someone has to have the role of secondary person behind the scenes and that’s fine with me,” he said during the 2003 season. “As long as my running back is getting 1,000-yard-plus seasons and getting all the accolades, that means I’m doing my job. We all take credit. It’s win as a team and lose as a team.”

“He’s so unselfish, so quiet,” Favre added. “He never complains. That’s what a great team is made of, players like that. Ahman [Green] scores and everyone’s jumping on Ahman but no one says nothing to William. But he doesn’t need that to make him play any better. He doesn’t need people to call his name.”

The Packers recognized Henderson’s contributions to the organization when they inducted the fullback into the Packers Hall of Fame in 2011. It was an honor that was well deserved.