This is the next in a series of articles providing an in-depth analysis of each position group on the Green Bay Packers. Today, we will examine the tight ends.

Click here to see our analysis of the quarterback position. Click here for an in-depth look at the Packers running backs this season.  The defensive line analysis can be found here.

The grades will be for each unit as a whole, but we will provide analysis of each player, their strengths and weaknesses and a quick analysis of where they stand heading into the offseason.

The Packers tight ends were not as productive in the passing game in 2021 as they were the previous season. Part of that was due to injuries at the tight end position and to tackles David Bakhtiari and Elgton Jenkins which forced the tight ends to help block and protect the quarterback more than they had to in the past.

Here are the grades for the Packers tight ends in 2021. The marks are based on a combination of expectations and performance.

Robert Tonyan started the season as the primary receiving tight end. In 2020, Tonyan had a Pro Bowl caliber season (although he was not selected to the team) with 52 catches for 586 yards and 11 touchdowns. He had an impressive 88.1 percent catch percentage and earned the trust of Aaron Rodgers.

Tonyan started this season off slowly. When both Bakhtiari and Jenkins were hurt early in the season, the Packers asked their tight ends to stay in and block on a lot more plays and that reduced the number of chances Tonyan had to go out on pass patterns.

Tonyan played the first eight games of the season and made 18 catches for 204 yards and two touchdowns. His catch percentage was down to 62.1 percent, the lowest total of his career.

He suffered a season-ending injury in the Week 8 game against Arizona, just as the offensive line was getting healthy again and his chances to catch passes were likely to increase.

Tonyan is scheduled to be an unrestricted free agent this offseason. The injury he suffered may reduce his market value a bit. GM Brian Gutekunst must decide how much of a priority bringing Tonyan back should be.

No other tight end presently on the Packers roster can stretch the field as well as Tonyan can. But with the Packers cap issues, Tonyan may not be back in 2022. The Packers could also try to sign him to a one-year deal and see if Tonyan wants to bet on himself. He needs to prove he’s healthy and that his performance in 2020 was not a fluke.

Marcedes Lewis has played 16 seasons in the NFL and remains one of the better blocking tight ends in the league. He is also a leader in the locker room and has the respect of his quarterback who truly appreciates what “Big Dog” brings to the team.

Lewis played in all 17 games in 2021 and caught 23 passes on 28 targets for 214 yards. He no longer has the speed to be a downfield threat but if you throw him the ball short, he has reliable hands and his size makes him tough to bring down one-on-one.

Lewis will be 38 before the start of training camp and although he is under contract for 2022, it’s not clear if he’ll retire or return for a 17th NFL campaign. If Rodgers returns to Green Bay, the chances of Lewis being back increase. There is no doubt “Big Dog” can continue to contribute the Packers in 2022 if he chooses to play another season.

When Tonyan was injured, the Packers turned to Josiah Deguara as their primary receiving tight end. Deguara missed most of 2020 due to an injury of his own so this was really his first full season in the NFL.

Deguara improved as the season progressed although he never became an impact player. His biggest play was his 62-yard touchdown pass in the season finale against the Lions. He finished with 25 catches for 245 yards and two scores. He never had more than three catches in any game this year and never exceeded five targets in any contest.

If Tonyan doesn’t return, Deguara will likely have a bigger role in 2022. The coaching staff is also expecting the former University of Cincinnati star to take another step forward in his development as an NFL tight end.

Dominique Dafney played in 10 games and is used primarily as a blocker. He had two catches for 34 yards on four targets. Dafney has a good work ethic and a willing blocker. He should be back in training camp next season to fight for a job as a depth tight end. If Lewis doesn’t return, he should compete for the primary blocking tight end spot.

Tyler Davis played in 14 games and played 121 offensive snaps and saw extensive action on special teams. Davis caught four passes for 35 yards with 22 of them coming on one play. Davis is no deep threat, but he has decent hands and is a dependable check down receiver. His blocking is his primary asset.

Matt LaFleur’s offense requires the tight ends to be versatile and play a variety of roles. The Packers didn’t carry any fullbacks in 2021 so tight ends also served as H-backs and with the injuries to the offensive line, had even more blocking responsibilities than receiving responsibilities for a good part of the season. The tight end roster may undergo changes in 2022 but there is talent and potential here.

Packers QB Aaron Rodgers Really Does Own the Bears 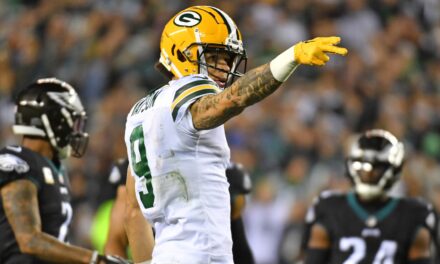