The Green Bay Packers made two selections in the first round of the 2022 NFL Draft. The Packers had their own pick (28th overall) and had the Las Vegas Raiders first selection (22nd overall) after the Davante Adams trade.

The Packers surprised a lot of people by drafting two defensive players at positions they had not emphasized in the past. With the 22nd overall pick, GM Brian Gutekunst selected inside linebacker Quay Walker and then with the 28th pick, he added defensive lineman Devonte Wyatt. Both players were teammates at the University of Georgia and won the national championship with the team in 2021.

Here is a look at how the Packers two first round picks are doing as we approach the midway point of training camp.

Thus far, Walker has been playing with the first string defense almost since day one. Defensive coordinator Joe Barry has wanted to insert Walker into the lineup to play fewer small boxes. By having Walker and De’Vondre Campbell on the field, the Packers would have two quick, instinctive linebackers who are smart enough to read plays and get into the right position to disrupt them. Both potential starters are fast enough to cover the ground needed to make sure runners and receivers cannot find room to hurt the Packers defense in their part of the field.

Walker started the Pack’s first preseason game in San Francisco last Friday. He was on the field for 12 defensive snaps and even called the defensive signals when he was in the game. Campbell is expected to resume those duties when the regular season starts next month, but it will help Walker learn the playbook and acclimate to the NFL to call the signals in preseason.

At rookie camp in May, Barry explained why he was excited to have Walker join the defense. “You watch any Georgia football game last year; it’s hard not to see number seven flying around making plays,” Barry said.

By June minicamp, Campbell took notice of Walker and tweeted:

I try to help and give as much advice as I can even though he doesn’t really need it he already a baller 😂. Very smart Young Man with a great future ahead of him https://t.co/pBfsT5SkEc

Injuries also slowed Wyatt’s progress a bit. Wyatt missed the first preseason game in San Francisco because of a concussion. He has since returned to the field and took part in Tuesday’s joint practice with the New Orleans Saints.

Defensive line coach Jerry Montgomery has been enthusiastic about what he’s seen from Wyatt thus far. “He can be really good on first and second down, and he’s an inside guy that has some unique traits as a pass rusher. Some things you can’t teach, you just naturally have,” Montgomery said during rookie camp. “He’s got twitch. I’d like to call it awkward movements, some movements he can be out in that other guys can’t be and he can recover from those things. And he’s got a high motor, just a naturally high motor. So, really, really good defensive line traits.”

Head coach Matt LaFleur quickly took a liking to what he saw Walker. “He sure looked good in some of the pass rush things we were doing,” LaFleur said in rookie camp. “I love his intensity, his focus. You can tell he’s been coached hard. There’s a reason why he’s a first round pick. You can see it.”

Wyatt enjoyed the first joint practice with the Saints on Tuesday and the intensity of it. It also showed him how he needs to play to be successful in the NFL. “I could just see how guys [were] playing and they let me know I’ve got to pick it up myself,” he said. “There are new guys out there, running to the ball, knocking back, killing blocks and things like that. That’s one thing when you go out there, you’ve got to do the same thing, you’ve got to keep the standard that way.”

While Wyatt may not be a starter when the regular season starts in Minnesota on September 11, he will almost certainly be part of the defensive line rotation. The faster he adjusts to life in the NFL, the bigger his role will become.

The Packers emphasized defense in the first round of this year’s draft. It will be some time before we see the full impact Wyatt and Walker will have, but both have showed promise early in training camp as they prepare for bigger things. 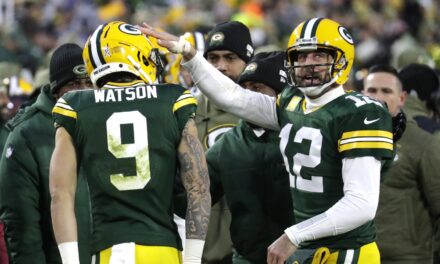