This hasn’t been an easy season for the Green Bay Packers as the team’s performance has been a big disappointment. But one bright spot for the club has been the recent play of rookie wide receiver Christian Watson.

The second round pick out of North Dakota State is finally healthy and has been showing why GM Brian Gutekunst traded up to get him during the 2022 NFL Draft.

In the last three games, Watson has caught 12 passes for 265 yards and six touchdowns. He has scored at least one touchdown in each of those three contests and has used his elite speed to make big plays that helped the Packers offense click. The Packers averaged 27 points per game since Watson began to impact the offense while averaging just 17.1 points over the first nine contests.

Watson has become a steady and dynamic piece of the Green Bay offense after a difficult start to his rookie campaign. First, he suffered a knee injury during OTAs that caused him to miss all the preseason and most of training camp. That cost him valuable time to learn the offense and develop chemistry with Rodgers and his teammates.

On the team’s first offensive play from scrimmage this season, Rodgers threw a deep ball to Watson who dropped what would have been a sure touchdown after he torched veteran cornerback Patrick Peterson of Minnesota.

Then, an assortment of nagging injuries caused him to miss three regular season games and parts of a few more. In the Packers first nine games this season, Watson never had more than three catches or 34 yards receiving in any of them.

But against Dallas in Week 10, things started to click for Watson. After two early drops, he started to make the big plays the team knew he had the potential to make. He finished the game with four catches for 107 yards and three touchdowns. He hasn’t stopped making plays since.

Head coach Matt LaFleur was impressed with the impact Watson has had on the offense in recent weeks. “I think the one thing that you definitely saw, you could feel his speed out there,” LaFleur told reports after the win over Dallas. “And I think anytime that you have that element, it does change how maybe you’re viewed or how teams will play you. To get those big explosive plays was absolutely critical for us. We talk about it every week: You want to score points, get explosive plays, and he provided a huge spark for us.”

Rodgers has also liked what he’s seen recently from Watson. “I think that [first touchdown] probably on the atomic level shifted a lot of different things for him, exorcising some energetic demons,” Rodgers told reporters after Watson’s breakout performance against Dallas. “I’m proud of him. He made some plays.”

Other teams are also taking notice of what Watson brings to the table. In the days leading up to last week’s game against Philadelphia, Eagles cornerback James Bradberry mentioned the importance of slowing down Watson to beat the Packers.

The good news for the Packers is that Watson is just starting to scratch the surface of his immense potential. He’s always had a good attitude from the time he arrived in Green Bay and the more comfortable and confident he gets in his ability to make plays in this offense, the better he can become.

Add the possible return of fellow rookie Romeo Doubs to the lineup, which could happen as soon as this Sunday in Chicago and the Packers will have more weapons at their disposal which will prevent opposing defenses from focusing exclusively on Watson. The more he plays, the more comfortable he will get with Rodgers and with Jordan Love.

There are still things Watson needs to work on. He still needs to reduce the number of dropped passes and he needs to be more consistent with his patterns and at reading defenses.

But already, his progress and improved consistency have been remarkable. And with Watson’s size, speed and attitude, he should be a major part of the Packers offense for years to come. 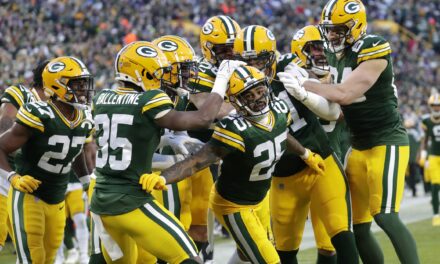