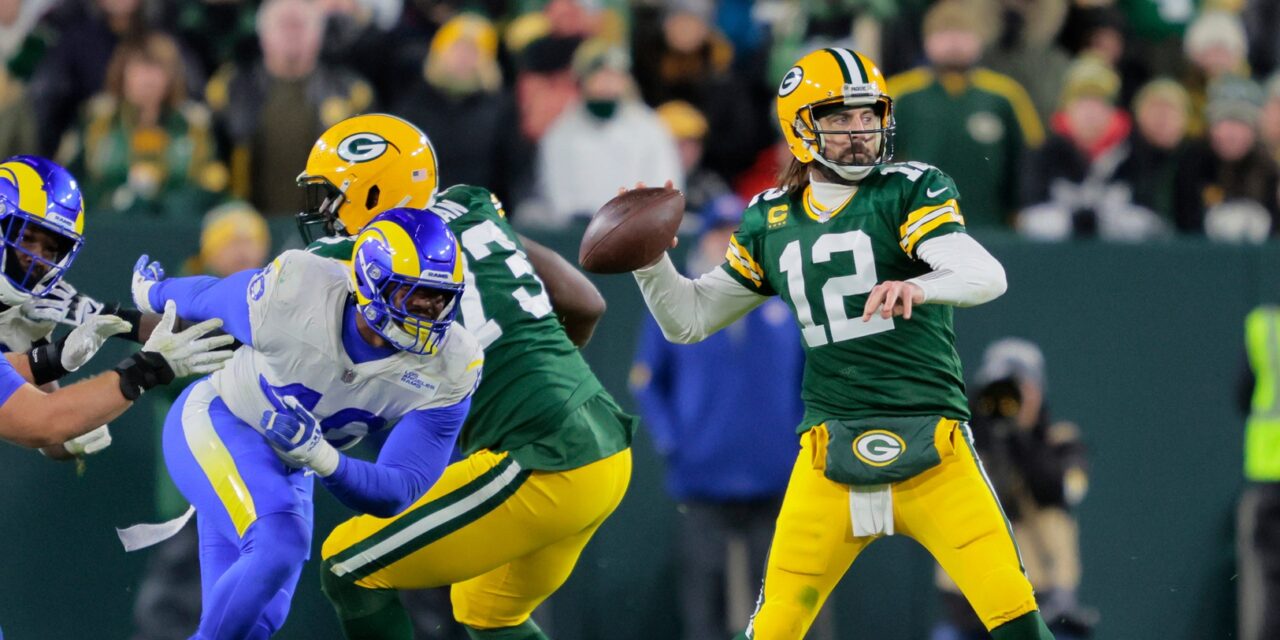 The Green Bay Packers return to action after the bye week to host the Los Angeles Rams at Lambeau Field on Monday night. The defending Super Bowl champions are having a disappointing 4-9 season and are tied for last place in the NFC West.

The Packers are coming off their bye. In their last game, they defeated the Bears 28-19 in Chicago. The Packers are now 5-8 and they need to win each of their last four games and get help to qualify for the playoffs. The Rams edged the Las Vegas Raiders 17-16 last Thursday to end a six-game losing streak.

Here is a look at six key factors that will determine who wins Monday night’s game at Lambeau Field:

Mayfield did a good job last Thursday in his Rams debut with very little practice time. The former first round pick completed 22-of-35 passes for 230 yards and one touchdown. He did not throw an interception.

Mayfield never lived up to the hype surrounding his draft status but he’s a serviceable quarterback and he can benefit from playing for Sean McVay, an offensive guru.

The Packers have struggled to get pressure on opposing quarterbacks since Rashan Gary was lost for the season with a knee injury against Detroit.

Preston Smith, Kingsley Enagbare and Kenny Clark need to lead the way against a shaky Rams offensive line that has been dealing with injuries and inconsistent play all season. Even in the win last week, Mayfield was sacked four times.

If the Packers can get consistent pressure on Mayfield, they can likely force him to compromise his accuracy and even turn the ball over.

The Rams running game is mediocre at best so if the Rams can’t pass the ball, they’ll have trouble putting points on the board.

The rookie second round pick out of North Dakota State has been on fire over the last four games, scoring eight total touchdowns and going over 100 yards receiving in two of those contests.

Watson has elite size and speed and is finally getting comfortable and confident in the Packers offense and has earned the trust of Aaron Rodgers.

The Rams pass defense ranks 21st in the league and is giving up 228.6 yards per game through the air.

Watson and the Packers should have a full complement of receivers available Monday night with Romeo Doubs returning to the lineup and Allen Lazard, Randall Cobb and Sammy Watkins all healthy and expected to play.

Rodgers should be able to find Watson for at least one or two splash plays that help tilt the game in the Packers favor. Watson is looking for his fifth straight game with at least one touchdown.

Aaron Rodgers is as healthy as he’s been since the early part of the season. He practiced without a bandage on his broken thumb this week and says both the thumb and his injured ribs feel better after the bye. If the Packers hope to run the table, they need to keep Rodgers healthy.

The Rams have three solid pass rushers in Leonard Floyd, Bobby Wagner and Aaron Donald. Donald is expected to play after dealing with some recent injuries.

The Packers offensive line is likely to be without starting LT David Bakhtiari again. The former All Pro missed the Bears game as he recovers from an emergency appendectomy. Zach Tom replaced him and played well. Tom may end up having to block Donald which would be a big challenge for the rookie.

The Packers did not allow a sack against Chicago although the Rams defense is better at rushing the passer than the Bears D.

If a relatively healthy Rodgers has time to throw, he should be able to exploit a below average secondary that has been dealing with injuries and inconsistency all season.

The Packers need to have balance on offense to win. Whether it’s Aaron Jones or A.J. Dillon, the Packers will have to run the ball enough to keep the Rams defense honest.

Los Angeles has a solid run defense and is ranked 5th in the league, allowing an average of 101.9-yards per game on the ground.

Dillon may have a better chance of having a big game than Jones. He has played his best football this season in the last two games and seems to excel in cold weather.

The key for the Packers is to run enough to keep the Rams defense honest and to stay out of third and long situations. Rodgers and head coach Matt LaFleur need to call enough running plays to do that and stick with it even if the team is not gaining large chunks of yards on the ground early.

The Rams defense allows opposing teams to move the ball well between the 20s but they are second in the NFL in red zone defense, allowing touchdowns just 41.5 percent of the team opposing offenses get inside their 20.

The Packers offense is below average in the red zone, ranking 22nd as they score touchdowns 51.3 percent of the time they get inside the opposing 20s.

If the Packers are forced to settle for three points when they get into the red zone, the Rams will keep the game close and have a chance to win it late even if their struggling offense doesn’t put a lot of points on the board.

But if the Packers score at least three touchdowns in this game, the Rams struggling offense will be challenged to keep pace.

Neither of these teams are particularly good when it comes to turnovers. The Packers have been a bit better of late, but they’re still minus-2 in turnover differential for the season.

The Rams rank 30th out of 32 teams with a minus-6 differential. Only the Saints and Colts have been worse.

The Rams as a team have thrown 13 interceptions which means Jaire Alexander, Rasul Douglas and company should be able to take advantage of Mayfield and the struggling Rams offense.

If the Packers win the turnover battle, they probably win the football game.

At the start of the season, this looked like a potential NFC Championship Game preview with home field advantage possibly on the line for the winner. Now, it’s a matter of survival for the Packers while the Rams are already playing out the string.

A healthy Rodgers throwing to Watson and Doubs should be enough offense to get the Packers past the Rams who have only scored more than 20 points in a game three times this season.

The Packers also have the advantage of playing on a cold December night in Wisconsin against a warm weather team that is not accustomed to those conditions.

This is a game the Packers should win, but we said that a lot this season and it didn’t always work out. This week, it will.