The 2022 NFL Draft is fast approaching and as of now, the Packers have four of the top 59 picks with two selections in each of the first two rounds. That gives GM Brian Gutekunst the ability to move up or down or to trade picks for players he wants. He could also hold on to the picks and build the team that way.

Short-term needs are for the 2022 season whether they are for starters or for depth at a given position. Long-term needs are designed to add future starters, to add depth and to replace players who may be retiring, becoming free agents or released for cap reasons in the future.

The Packers have two-time defending NFL MVP Aaron Rodgers returning to start in 2022 with former first-round pick Jordan Love set to serve as the primary backup and Kurt Benkert the favorite to be the third quarterback. Danny Etling will also be in training camp fighting for a job.

The Packers are set at this position for 2022 unless they decide to trade Love which would open a battle for the backup spot.

We also don’t know how much faith the Packers front office has in Love as Rodgers’ potential replacement. Quarterbacks usually take time to develop so the Packers may draft a developmental quarterback this year or more likely decide on Love and their future at the position next offseason.

The Packers have a strong one-two punch at running back with Aaron Jones and A.J. Dillon. They are both good receivers and have contrasting running styles. Both are starting caliber backs.

Depth is a bit of an issue with Kylin Hill hoping to return from a knee injury and Patrick Taylor making a bid for more playing time.

If the Packers draft a running back, it will likely be on day three of the draft.

Jones’ cap hit in 2023 is more than $20 million and it’s doubtful the Packers will keep him at that number. That means they either need to work out an extension with him or move on from the former UTEP star.

Dillon will still be on his rookie contract in 2023 but the Packers will likely be looking to add a running back with 2023 in mind whether in this year’s draft or next year’s.

With Davante Adams and Marquez Valdes-Scantling both not returning, the Packers will be without two of their top three wide receivers from last season. Randall Cobb is wearing down and frequently misses time. Allen Lazard will be back but is not an established WR1 while Amari Rodgers is looking to bounce back from a disappointing rookie campaign.

The Packers have four picks in the first two rounds. One or more of those picks will be used on a receiver or traded to acquire a receiver. The Packers have an immediate need to upgrade this position before the start of the 2022 season.

Cobb probably won’t be back in 2023 and entering this draft, the Packers will likely spend at least two picks on wide receivers with one designated to contribute more immediately and one as a more developmental pick. This area needs to be addressed with both the immediate and long-term needs in mind.

Robert Tonyan re-signed with the team and is back for 2022 and while the team says he is “ahead of schedule” rehabbing his injured knee, we are still uncertain when he’ll be ready for full-time duty.

Tonyan, Marcedes Lewis and Josiah Deguara give the Packers a solid top three at the position especially if Tonyan is back and ready to play. Dominique Dafney and Tyler Davis provide depth and serve mostly as blockers and on special teams.

Tonyan is on a one-year deal and we don’t fully know how he’ll play after the knee injury. His return in 2023 is possible but far from certain. Lewis may retire after the coming season. That leaves two potential holes at the top of the depth chart.

Look for the Packers to use a mid-round pick to add a developmental tight end who can assume a bigger role in the offense in 2023.

There is talent here but still questions need to be answered. Will All Pro LT David Bakhtiari return to form in 2022 after playing in only one game last season because of a knee injury? How much of the upcoming season will Elgton Jenkins miss as he recovers from his knee surgery and when he returns, does he play tackle or guard?

There is a need for depth on the interior after the departure of Lucas Patrick and a veteran swing tackle is also a need.

Bakhtiari is on the wrong side of 30 and coming off a knee injury. The Packers are hoping he has a few more seasons left to play at a high level. As of now, his 2023 salary cap number is a little more than $29 million which is very high. Jenkins is only under contract for 2022 although the Packers certainly want to keep the versatile former Pro Bowler beyond his rookie deal.

There is youth inside but don’t be surprised to see the Packers take a tackle on the first two days of the draft and to fortify the offensive line in the later rounds to address depth.

Where Does Packers QB Jordan Love Stand After 2021? 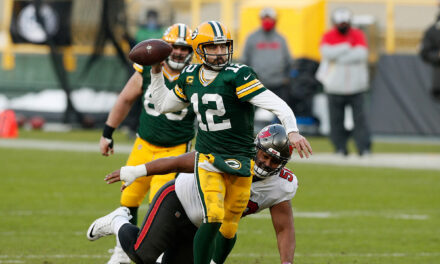