This is the next in a series of articles providing an in-depth analysis of each position group on the Green Bay Packers. Today, we will examine the defensive backs.

The secondary lost its best player in Jaire Alexander in Week 4. Still, they were able to come back and play at a high level throughout the season with two key additions at cornerback in Eric Stokes and Rasul Douglas.

The Packers pass defense was ranked 10th in the league in yards allowed despite Alexander’s absence. The coordination between the safeties and corners was better and for most of the season, the number of splash plays allowed was reduced.

Here are the grades for the Packers secondary in 2021. The marks are based on a combination of expectations and performance.

Jaire Alexander is one of the best cover corners in the NFL but he was injured in Week 4 and didn’t return to action until the playoff game against the 49ers. Alexander had one interception in the four games he played. He was not as effective in coverage as he was in 2020 but was still playing at a very high level and is one of the league’s best shutdown corners.

Getting Alexander back and healthy next season will be a big boost for the Packers secondary.

The Packers hoped that rookie Eric Stokes would win a starting job before the season was over but the injuries to Alexander and Kevin King thrust him into the starting lineup by Week 3. Stokes made 55 total tackles and intercepted one pass while breaking up 14 more. According to pro-football-reference.com, opposing quarterbacks completed just 49.5 percent of their passes when throwing to receivers covered by Stokes and their quarterback rating was just 71.3.

The first round pick out of Georgia still needs to improve his ability to adjust to the ball when it’s in the air. Too often, Stokes was in the right spot in coverage but the receiver was able to get to the ball before Stokes did.

Overall, Stokes had a strong rookie season. He has excellent speed, a good work ethic and the right attitude to be successful. If Stokes makes a second year jump, the Packers should be set at corner for years to come.

Chandon Sullivan was the primary slot corner and he had three interceptions this season to go along with 31 total tackles and four passes broken up.

Sullivan improved his numbers slightly over 2020 and plays well in the slot. He is an unrestricted free agent this offseason and may not be back.

Kevin King started the season as the starting cornerback opposite Alexander. King remains the same player he was in recent seasons. He has good size and plays well in spurts, but he isn’t consistent and often misses time due to injuries.

King played in 10 games this season and started six. He made one interception and broke up three passes while making 29 total tackles. Opposing quarterbacks completed 71.4 percent of their passes when throwing to receivers covered by King and their quarterback rating was 108.9.

The Packers won’t bring King back unless he agrees to return for less money as he was on a one-year, prove-it deal he signed last offseason.

Rasul Douglas was signed off the Cardinals practice squad in early October. He went from castoff to playing at a Pro Bowl level with the Packers. The former West Virginia star doesn’t have the blinding speed of Alexander or Stokes, but he studies game film extensively and uses his experience and intelligence to put himself in the right position to make plays.

Douglas finished the season with five interceptions and returned two of them for touchdowns. He also made a key interception that clinched the Packers win over the Cardinals. He also broke up 13 passes and made 57 total tackles and forced one fumble.

Opposing quarterbacks completed just 50 percent of their passes when throwing to receivers covered by Douglas and had a quarterback rating of just 44.5.

Douglas is an unrestricted free agent who the Packers would love to bring back. It is likely Douglas would get more money elsewhere but bringing him back would give the team three quality starters at corner.

Shemar Jean-Charles played mostly on special teams in his rookie season, playing only 37 snaps on defense all season. He was making a big jump from Appalachian State to the NFL. The Packers like his ball skills and his potential but he wasn’t ready for extensive duty in the secondary this year.

The Packers kept Kabion Ento on the practice squad and he will compete for a job in camp next season. Kiondre Thomas signed a futures deal with the Packers after playing four games with the Chargers and making one tackle.

Adrian Amos is a smart and consistent free safety who is rarely caught out of position. He provides leadership and experience to the secondary. Amos played all 17 games and made two interceptions and broke up eight passes. He made 93 total tackles on the season.

Amos has a high cap number for 2022 which is estimated at nearly $12 million. The Packers may ask his help to reduce that number or they could part ways with Amos to save cap space. Losing Amos would be costly to the quality of the team’s pass defense.

Darnell Savage had an up and down season as the other starting safety. When he’s playing well, Savage can break up passes (he had nine this season) and make plays close to the line of scrimmage. When he’s off, Savage can be beaten in coverage and arrives a step late on big plays.

He finished with 63 total tackles and two interceptions. Opposing quarterbacks completed nearly 65 percent of their passes and had a quarterback rating of 117.4 when throwing to receivers covered by Savage.

Next year will be Savage’s fourth NFL season and the Packers are hoping he will be more consistent as he continues his development.

Henry Black was the third safety for most of the season. He played in all 17 games and intercepted one pass, broke up two and forced a fumble. The former Baylor star was in on 38 total tackles.

Opposing coaches were able to create some mismatches by picking on Black and Justin Jefferson and Odell Beckham Jr beat him on long passes by creating those mismatches. Black also saw extensive action on special teams.

Vernon Scott saw action in three games but played exclusively on special teams. Scott is under contract again for 2022 and will battle for a roster spot.

Innis Gaines spent the season on the practice squad and was elevated for one game. He saw action exclusively on special teams and made one tackle. Gaines will be back to compete for a job in 2022.

Shawn Davis also spent the year on the practice squad and was elevated for one game making one tackle on special teams.

The secondary did a better job of reducing splash plays this year especially in the first half of the season. The team has two solid starting safeties and has an outstanding pair of starting corners in Alexander and Stokes. If they can have Douglas return, their depth and talent at corner would be outstanding. This group is solid and deep and hopefully the team can keep Douglas who added so much to the team this season.

Win or Go Home: Aaron Rodgers and the Green Bay Packers Have Been Here Before 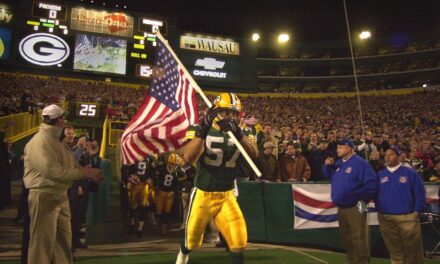