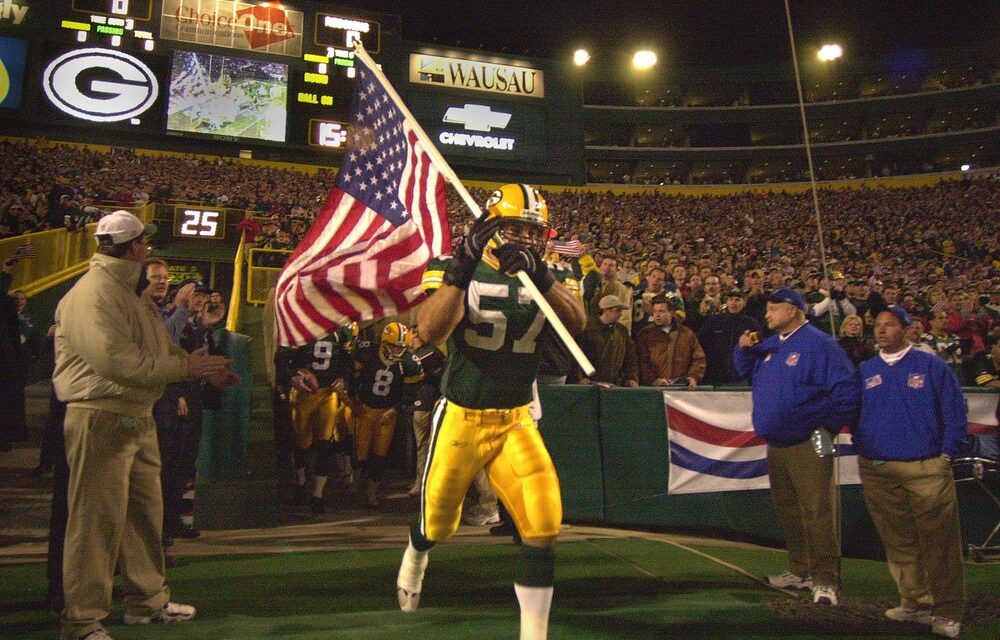 The atmosphere at Lambeau Field was electric on September 24, 2001. The Washington Redskins were in town to end the NFL’s weekly schedule before a national television audience. The NFL canceled two weeks of games after the terrorist attacks on September 11 and then returned to action on the weekend of September 23. This was the first nationally televised game since then and it was an event to show the country that life could, gradually, start returning to normal.

Before the game, Packers reserve linebacker Chris Gizzi, himself an Air Force Academy alum and in the Air Force reserves, led the team out onto the field carrying a large American flag. The crowd was moved and united by the emotion and symbolism of the moment and the country saw the city of Green Bay display their love of their country.

“It was like that, boom-boom-boom,” Gizzi said in 2021. “I didn’t have time to think. I stepped on the field and you could feel it. I just took off. I just tried to keep my footing because the ground was shaking from the fans. I literally mean that.”

“Our hearts went out to the rest of the country. We know we live in Green Bay and not New York or Washington, but we felt their pain,” Packers head coach Mike Sherman said after the game. “We focused this week on what we had to do and we did it.”

Once the game started, the Packers took total control of the contest and blanked Washington 37-0. It was the Packers first shutout since they blanked the then Los Angeles Raiders 28-0 on December 26, 1993, the game LeRoy Butler invented the Lambeau Leap.

Brett Favre threw for 236 yards and three touchdown passes, one to Antonio Freeman, one to Bill Schroeder and one to tight end Bubba Franks. Ryan Longwell booted three field goals for the Packers.

During the game, Favre surpassed the 35,000 yard mark for his career. He finished his NFL career with 71,838 which was first all-time when he retired after the 2010 season.

Running back Ahman Green gained 116 yards on 25 carries and caught six passes for 30 more yards. The performance put him first in the league through two games with 273 yards. He would finish the season with 1,387 yards and earn his first career Pro Bowl berth.

“We knew if we ran the ball right at them, we’d be able to put the game out of reach,” Green said. “The offensive line opened up holes the whole second half.”

While the offense played well, the defense was dominant. They sacked Washington quarterback Jeff George five times with Vonnie Holliday, Santana Dotson, Billy Lyon and Kabeer Gbaja-Biamila each getting one sack while Nate Wayne and John Thierry had 0.5 sacks each. Wayne also corralled his first career interception

Washington had only eight first downs and gained a total of 137 yards all game. The Packers also forced three turnovers with backup running back Rondell Mealey scoring the game’s final points on a 27-yard return of a fumble recovery. The longest gain of the game for Washington was a mere 17 yards.

“This is a special group of guys,” defensive coordinator Ed Donatell told reporters after the game. “They like working hard and they like working together and that’s a great ingredient when you have that. These guys care about each other . . . and they do everything you ask them to do.”

The Packers led only 10-0 at the half but took care of business after the intermission. “We came out in the second half and played physical football,” Sherman said. “At halftime, I told the team if they really wanted to be a championship team, they were going to have to play a dominant second half. And we did.”

The Packers finished the season with a 12-4 record and made the playoffs for the first time in three years. This dominant performance made it clear how good this team could be.

But 21 years later, the image of Gizzi running out to the field carrying the American flag remains the enduring memory of this game. Today, he is the Packers strength and conditioning coach.

He says people still remember him for that game. “People will say, ‘Oh, you were that guy!’” Gizzi said. “It was a moment bigger than yourself. You can’t ask for a better moment.”