The Green Bay Packers selected 11 players in April’s NFL draft. While nearly all of them are likely to make the team or at least the practice squad, not all of them will see significant playing time as rookies.

There are several factors to consider when determining playing time. Obviously, higher draft picks are more likely to see the field sooner than later picks. The depth at each position, how quickly the rookies pick up the playbook and injuries will also all play a part. How often these players will play on special teams is also considered when compiling this list.

Here is an early look at the five Packers draft picks who are likely to see the most playing time as rookies:

Doubs is a more polished route runner and has more experience in a more sophisticated college offense than Christian Watson and there is a chance he plays more than Watson, especially early in the season.

Doubs can get deep and had more consistent hands in college than Watson did. He also has experience returning punts which will get him on the field sooner if he can win that position.

The Packers may get more out of Doubs as a rookie than most fourth-round picks.

Packers GM Brian Gutekunst traded up to select Watson in the second round. He has all the physical tools you want in a receiver, size, speed, the ability to catch the ball deep downfield and the desire to be better.

Watson needs time to work on his route running and to make the big adjustment between North Dakota State and the NFL. He also needs to improve his technique of catching the football as drops were a consistent problem in college.

The quicker he makes those adjustments, the sooner he can gain the trust of quarterback Aaron Rodgers and see more playing time.

The wide receiver depth chart is wide open after the departure of Davante Adams and Marquez Valdes-Scantling. Watson and Doubs will be battling for starting spots with Allen Lazard, Sammy Watkins, Randall Cobb and Amari Rodgers among other players.

Watson may also return kicks which he did successfully in college. That will give him more playing time especially early in the season.

There are a lot of questions surrounding the Packers offensive line due to injuries to David Bakhtiari and Elgton Jenkins. We know Jenkins is highly unlikely to be ready to start the season but we don’t know what Bakhtiari’s status will be. Head coach Matt LaFleur remained hopeful that his starting left tackle will be ready to go when training camp gets under way at the end of July.

The Packers drafted three offensive linemen this year with Rhyan being the first taken in the third round. Rhyan played tackle at UCLA but because of his shorter arms and because of his lack of length, he may play guard in the NFL.

It will be interesting to see where the coaching staff has Rhyan lined up during training camp. He may be in a battle for the starting spot at right guard or at right tackle. There is a lot of uncertainty surrounding the opening day offensive line but of the three drafted rookies, Rhyan has the best chance of seeing the field in his first season.

The Packers selected defensive lineman Devonte Wyatt with the 28th overall pick in this year’s NFL Draft. The former Georgia star is coming to a position that has been an area of concern for the Packers for the last several seasons.

Wyatt can play the run well and has a quick first step off the snap of the ball that helps him get penetration both against the run and at pressuring the passer.

One advantage Wyatt may have that could get him in the lineup sooner is that he can line up at any of the positions along the defensive line.

Inside linebacker is another position the Packers front office has not emphasized over the past decade or more but with De’Vondre Campbell back and Walker selected with the 22nd overall pick, the Packers potentially have the deepest and most talented players at the position in years.

Walker was already practicing with the starters during mandatory minicamp last week, surpassing veteran Krys Barnes in the lineup.

Walker has the size and speed to be a three-down linebacker once he learns the playbook and adjusts to the playing in the NFL.

It is likely Walker starts from day one and has more playing time than other Packers rookie this season. 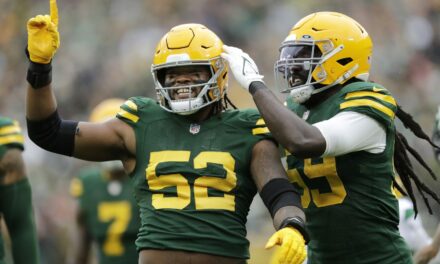