The Green Bay Packers will not have Davante Adams or Marquez Valdes-Scantling lining up at wide receiver in 2022. The team traded Adams to the Las Vegas Raiders while MVS signed as a free agent with the Kansas City Chiefs.

Packers GM Brian Gutekunst said it would be a group effort to replace Adams and while there is no doubt the Packers will draft at least one wideout, the team will also be looking to add a veteran receiver either as a free agent or via trade.

Keep in mind that the Packers may be waiting for the price to come down on some of these players before ultimately signing one or more of them. The Packers still need to sign their draft picks and keep some flexibility to sign players in-season when injuries inevitably strike.

Here is a look at the receivers still available in free agency who could help the Green Bay offense in 2022. All of them are short-term solutions and all have age and injury concerns. They are not listed here in any particular order:

Fuller is one of the youngest players on this list. He’ll be 28 later this month. While he’s younger, he hasn’t been able to stay healthy recently. Fuller played just two games for the Dolphins last season and has never played a full season during his six years in the NFL. Last year he missed time because of a broken thumb. In 2020, he was suspended for six games for violating the NFL’s PED policy. He’s also missed time because of a hamstring injury and a torn ACL.

When he’s healthy, Fuller has great speed. In 2020, he has eight touchdown passes. If the price is right and he can pass a physical, Fuller may be worth taking a flier on.

Landy will turn 30 in November. The former LSU star earned Pro Bowl honors for five straight seasons between 2015-2019. A sprained knee cost him five games last season but he still had 52 catches for 570 yards and two touchdowns which were all career lows. He had hip surgery before the 2020 campaign.

Landry was never a speed demon but he does run precise routes and has good hands and that could help him to quickly gain Aaron Rodgers’ trust. He led the league with 112 catches in 2017.

Landry is best suited as a slot receiver which may not fit the Packers needs with Randall Cobb and Amari Rodgers both able to play that spot.

Green made the Pro Bowl in each of his first seven seasons in the league but he’ll be 34 on July 31st. Green is not the player he was in his prime, but he has the size the Packers like at 6’4” and was still productive last season catching 54 passes for 848 yards and three touchdowns.

Torn ankle ligaments cost him playing time in 2019 while a toe injury slowed him in 2018.

Green is more of a possession receiver than a burner but remember Adams was not a burner either.

Hilton is smaller and quicker than Green but he’ll turn 33 in November and has not played in every game in a season since 2017. He made four consecutive Pro Bowl appearances between 2014-2017 and led the league in receiving yards in 2016.

Hilton stands just 5’10” and 182 and his body may be breaking down. He’s a capable route runner and if he’s even 80 percent of where he was in his prime, could be an upgrade at the position for the Packers if he can stay healthy.

He missed seven games last season with a hamstring and was released by the Titans after spending just one season with the team.

With Atlanta, Jones was a dominant receiver but his health and age are obvious concerns. Jones is a good route runner which should help his chemistry with Rodgers if the Packers sign him.

Beckham is only 29 but he’s also coming off a torn ACL suffered in the Super Bowl and probably wouldn’t be ready to start the 2022 season. That limits his immediate impact to the Packers but may allow them to sign at a more reasonable price.

Beckham is very talented but also injury prone and has a reputation for being a bit of a distraction because of his attitude. If the Packers sign OBJ, they would almost certainly have to sign another vet who would be ready to start the season. 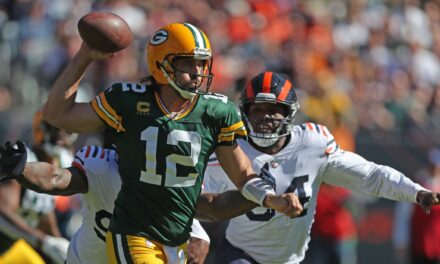