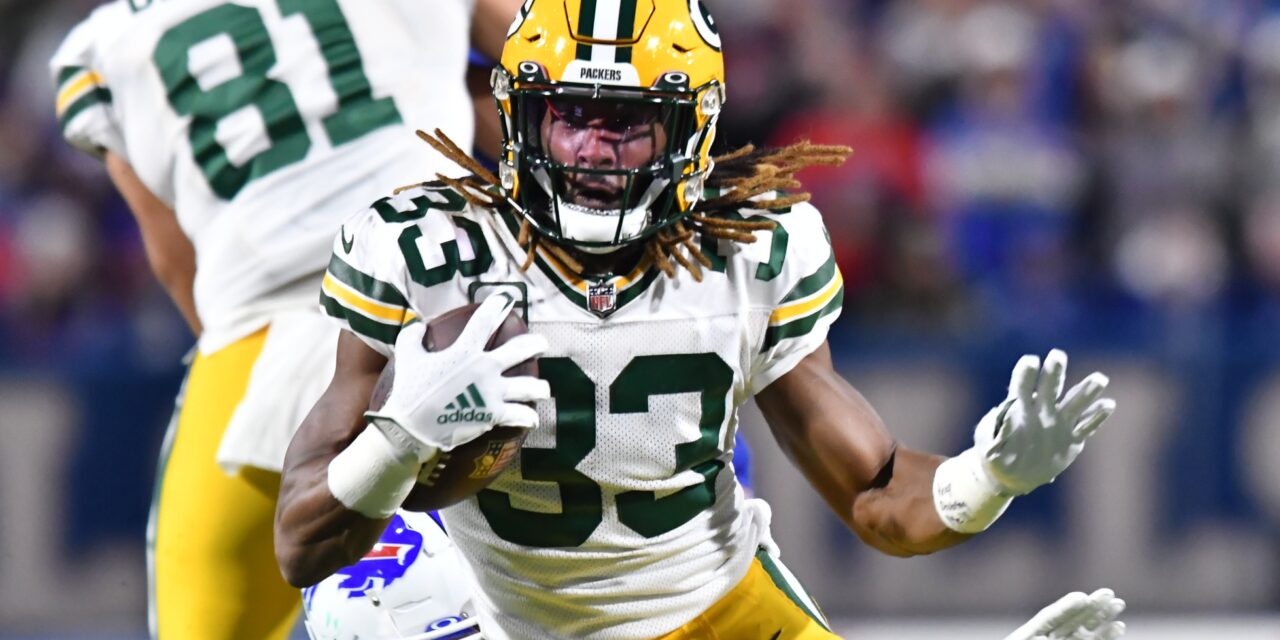 The Green Bay Packers fell behind early but never quit in their 27-17 defeat at the hands of the Buffalo Bills Sunday night in Orchard Park, New York. The Packers ran the ball effectively but couldn’t stop the run and had trouble containing the explosive Bills offense until it was too late.

The loss drops the Packers to 3-5 on the season while the Bills improved to 6-1.

Here is a look at 10 things we learned from the Packers 27-17 loss to the Bills:

The Packers offense figured out how to move the football and it primarily came on the ground. Jones gained 143 yards on 20 carries while the Packers as a team gained 208 yards on the ground and averaged 6.7-yards per run.

The Bills run defense allowing the fewest rushing yards per game in the league. The revamped offensive line did a good job of opening holes for the running backs and both Jones and A.J. Dillon found room to run and made the most of it throughout the game.

By emphasizing the run game, the Packers were eventually able to pass the football a bit more effectively even when the Bills knew they had to throw to catch up.

This type of play calling is what this team needed from Week 1 but maybe, the coaching staff and quarterback can learn from this and build on it to improve things for the remaining nine games of the season.

The injuries just keep stacking up for the Packers. Offensive lineman Elgton Jenkins was inactive and did not play at all.

During the game, the Packers lost more players to injuries including ILB De’Vondre Campbell and WR Christian Watson who was hurt while making his first (and only) catch of the game. The Packers were already thin at wide receiver with Randall Cobb and Allen Lazard unavailable for this contest. Losing Watson takes away the team’s speed at WR.

Add the ejection of ILB Quay Walker and the Packers had neither of their starting ILBs in the game for the second half.

Preston Smith was also shaken up late in the game although it was not clear if his injury was serious.

Losing Campbell would be a big blow to the defense as he is not only a quality starter but a leader on the field.

The Bills entered Sunday night’s game as a middle of the pack running team but their leading rusher was quarterback Josh Allen.

Despite their mediocre rushing attack, the Bills ran the ball extremely effectively against the Packers, gaining 153 yards on 27 carries which is an average of 5.7-yards per carry.

Obviously, the Green Bay defense had to concentrate on stopping the pass first but they allowed too many chunk plays on the ground that resulted in key first downs. In fact, the Bills hardly had any third down situations until the fourth quarter of the game because they were gaining so many yards on first and second downs.

The tackling and contain must be better for the Packers defense going forward. Losing both ILBs certainly didn’t help the run defense either.

The Packers were trailing at the half 24-7 and received the opening kickoff to start the third quarter. Aaron Rodgers marched the team down the field and threw a 10-yard touchdown pass to tight end Robert Tonyan to pull the Packers to within 24-13 (pending the extra point).

Unfortunately, Tonyan was called for offensive pass interference and the Packers ended up settling for a field goal and trailing 24-10.

The call was a bad one as the defender had initiated the contact and had a hold of Tonyan more than five yards beyond the line of scrimmage. The tight end managed to break lose but was called for a ticky- tack penalty.

If the touchdown would have counted, the Packers would not have needed to worry about getting two scores down the stretch and the game’s outcome may have remained in doubt until the final play.

This penalty really hurt the Packers and worse yet, it was a questionable call at best.

With injuries limiting the Packers receiving corps, two of their rookies stepped up and made some impressive big plays.

Doubs made two incredible catches including a 19-yard touchdown grab that saw him twist his body around twice to elude the defender and get the football. Doubs finished the game with four catches for 62 yards.

Toure, playing in only his second game of the season, made his first touchdown catch, a 37 yard play that saw him improvise when the play broke down and get deep and open in the end zone. Rodgers found him for the score and that pulled the Packers to within 27-17.

The way these two rookie wideouts were able to get in sync with Rodgers is encouraging and hopefully something that can help establish more trust between them. These things take time but this game should be a step forward for both Toure and Doubs in Rodgers’ eyes.

Penalties hurt the Packers throughout this game. Overall, the Packers had eight penalties accepted that cost them 58 yards.

In addition to the costly and questionable call on Tonyan, Walker was ejected from the game for shoving a Bills coach on the sidelines after a play. It appeared the coach was trying to prevent Walker from rolling further towards the Buffalo sidelines but Walker took it the wrong way and shoved the coach.

This was a costly and undisciplined penalty that cost the Packers a valuable starter. When Campbell was lost due to a knee injury, the loss of Walker became even more critical.

Penalties gave the Bills three first downs in this game and cost the Packers a touchdown and a starting player. When you’re a double-digit underdog trying to pull off an upset, you can’t afford to make those kinds of mistakes.

Packers CB Jaire Alexander and Bills WR Stefon Diggs were jawing at each other in the tunnel before the game even started. Watching the duo trash talk each other throughout the game was entertaining.

Both players had their moments. Diggs finished the game with six catches for 108 yards and a touchdown and had a 58-yard long gain on a play where he was covered by Rasul Douglas.

Alexander had an interception in the second half that helped keep the Packers in the game a little longer.

The Packers should have kept Alexander on Douglas more often to help contain him as other than the touchdown and the one long pass, the Packers did keep him in check for most of the game.

When this duo was matched up against each other, it made for an entertaining game within the game.

When you need to run the ball frequently because your pass offense is not clicking and your protection is leaky, it is even more important not to be using the full play clock on nearly every play.

Rodgers and Matt LaFleur both need to make this a point of emphasis if this situation repeats itself. The Bills didn’t mind too much if the clock kept running and the Packers took lots of time off the clock when they held the ball.

The Packers offensive line struggled to protect Rodgers, especially in the first half of the game. Zach Tom moved to left guard and the rookie was beaten badly on several pass plays early throughout the first half.

Officially, Rodgers was sacked twice and hit four times but he was under pressure enough throughout the game to limit what the passing game could do, especially with so many receivers out with injuries.

The protection did improve as the game went on, but the Packers clearly missed Jenkins and lack continuity and cohesion on the offensive line because of all the turnover at the position.

Yes, this was the Packers’ fourth straight loss and this game was tough to watch at times. But there are a few things to build on. The offense seems to have found a formula for moving the football consistently if they can run the ball effectively.

The Packers also never quit despite being down 17 points at halftime. LaFleur told the team to play like it was 0-0 and win the second half. They didn’t quit and at least made it interesting in the fourth quarter.

There are still things to clean up and there are no moral victories in the NFL, but the Packers stayed with one of the best teams in football on the road on national TV and that says something about the character of this team.

There’s still work to be done if this Packers team wants to have a chance at getting back into the Wild Card hunt.