The Green Bay Packers held on for 31-30 victory over the Ravens in Baltimore. The Packers denied the Ravens on a two-point conversion try in the game’s final minute to win the game by one point.

With the victory, the Packers improved their record to 11-3 on the season and maintained their hold on the top seed in the NFC playoff race. The Pack also clinched the NFC North division title for the third straight year and are guaranteed a playoff berth.

Here are 10 things we learned from the Packers 31-30 win over the Ravens:

After going three-and-out on their first drive of the game, the Packers offense found their groove. The Packers scored on five or their next six possessions scoring four touchdowns and one field goal in the process.

The Packers did a good job of play calling, mixing in just enough runs and longer passes to keep the Ravens defense guessing while they primarily moved the ball via short passes.

Rodgers was accurate and patient and did a good job of finding open receivers against a compromised Baltimore secondary that was playing without several key starters.

In the end, it was enough to win the football game.

Rodgers finished the game by completing 23-of-31 passes for 268 yards and three scores. That was good enough for a quarterback rating of 132.2.

The three scoring tosses ties Rodgers with Favre with 442 touchdown passes as a Packer. Rodgers reached that milestone in 45 fewer games than Favre (that’s almost three full seasons) and approximately 1,700 fewer attempts. Rodgers touchdown percentage as a Packer is 6.3 while Favre’s is 5.0.

Ravens tight end Mark Andrews had a strong game against the Packers and was dominant in the first half. The 6’5” former Oklahoma star had six catches for 95 yards and two touchdowns in the first half and was consistently beating Darnell Savage to make key catches. Andrews is six inches taller and roughly 58 pounds heavier than the Packers safety.

It was Andrews the Ravens tried to go on the two-point conversion in the final minute but Savage got a finger on the pass and broke it up to clinch the win for the Packers.

In the absence of Randall Cobb, the Packers have had different secondary receivers step up and have big games depending on the matchups against the team they are facing. Last week, it was Allen Lazard who had a big game but against Baltimore, it was Marquez Valdes-Scantling.

MVS finished the game with five catches for 98 yards and a touchdown. Rodgers went long to MVS a few times and hit on a 31-yarder that was his longest completion of the day.

Valdes-Scantling was also effective on short passes in addition to his longer routes and that was a good sign for the Packers.

Having Lazard and then MVS step up is critical for the Packers who will need receivers not named Davante Adams to be reliable parts of the passing game down the stretch.

Last week it was Justin Fields, this week it was Ravens backup Tyler Huntley. The former Utah star ran the ball well against the Green Bay defense, gaining 73 yards on 13 rushes and scoring two rushing touchdowns.

More importantly for the Ravens, Huntley was able to scramble away from Green Bay’s pass rushers. Even though the Packers were getting pressure on Huntley, they only sacked him once officially and Huntley was able to create plays when scrambling out of the pocket.

The Packers have brought Jones back slowly after he missed a game due to injury. Last week against Chicago, he had only five carries and eight touches and although he was efficient, it was clear the Packers were not going to give him a heavy workload.

That changed this week against Baltimore, a team that was one of the better run defenses in the league. Jones finished the game with 58 yards on 13 carries, not earth-shattering numbers, but a healthy 4.5-yard average per carry. He also caught two passes for 12 yards and a key touchdown.

The Packers will need both Jones and A.J. Dillon down the stretch so getting them both healthy and ready for the playoffs is an encouraging sign for the Packers.

While no penalties proved fatal, the Packers finished the game with eight infractions for 76 yards. Too many of the calls were sloppy penalties that simply made things more difficult for either the offense or the defense.

One pass interference call against Adrian Amos was questionable and seemingly influenced by the home crowd.

Green Bay will have to cut down on their mistakes if they hope to make a long playoff run.

Clark remained in the Covid protocols and was not active for the game. The Packers defense missed his ability to clog up the line of scrimmage against the run and allowed Baltimore to average 5.5-yards per rush. They also missed Clark’s ability to rush the passer.

Rookie T.J. Slaton finished the game with four total tackles as did Tyler Lancaster. Both filled in admirably but there was no doubt the Packers missed Clark.

There was one kick return that was intentionally kicked short and the Packers almost lost it after it hit the turf. The result was that the Pack started the possession deep in their own territory.

Four different players returned kicks for the Packers with Amari Rodgers having the longest runback which went for 26 yards.

Chandon Sullivan made a fair catch of the only punt by the Ravens and that came off without a muff or a penalty.

The Packers also recovered an onsides kick late in the game to clinch the win when Dillon fell on the loose ball.

Overall, the Packers special teams didn’t do major damage to the team and while they weren’t particularly good, that is progress.

While the Packers were winning their interconference game, they got help this week as their top competitors for the top seed in the NFC both lost.

Somehow, the Lions crushed the Cardinals 30-12 in Detroit while the Saints defeated the Bucs 9-0. That means that the Packers are now 11-3 while the Cowboys, Bucs and Cardinals are all 10-4. If the Rams beat Seattle on Tuesday, they will also improve to 10-4.

The Packers have clinched a playoff berth and remain in the driver’s seat for the NFC’s top seed and the bye that goes along with it, but they still don’t have a large margin for error as they return home to face the Browns next Saturday afternoon at Lambeau. 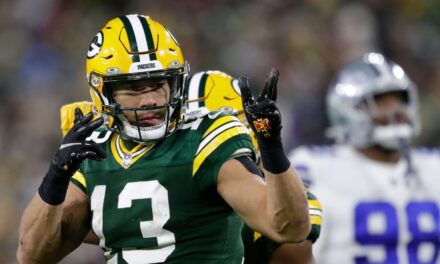 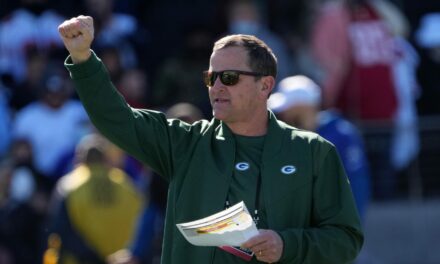