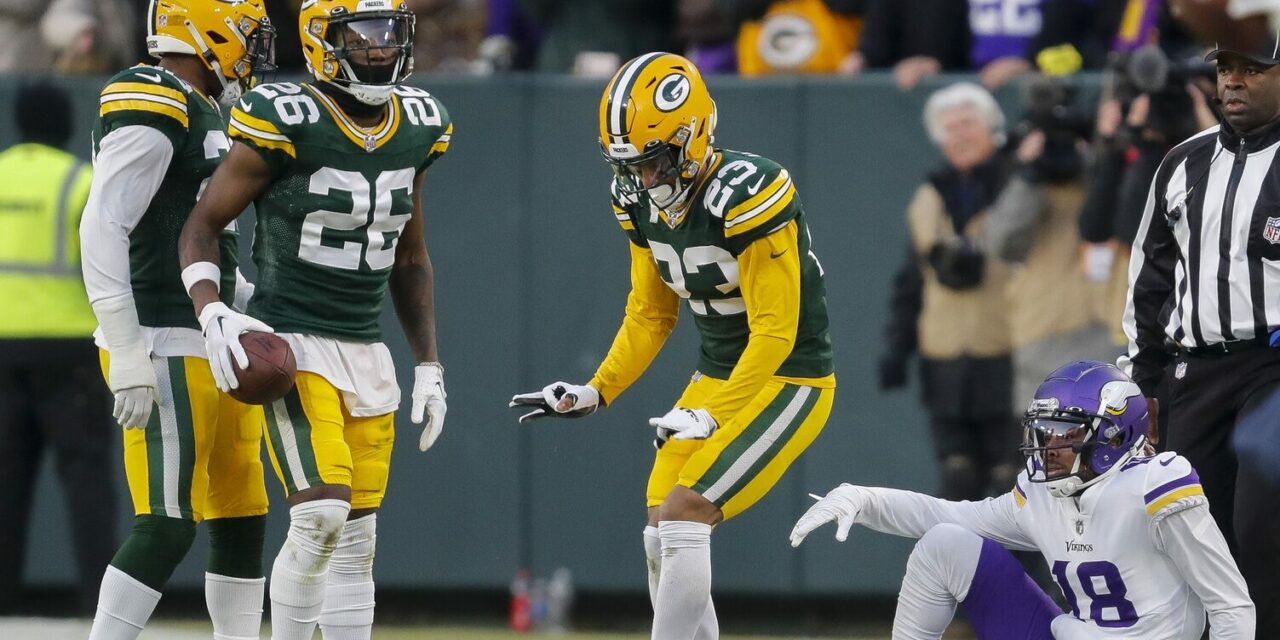 The Green Bay Packers and cornerback Jaire Alexander faced a big challenge entering their Week 17 game at Lambeau Field against the Minnesota Vikings: they had to find a way to contain Minnesota wide receiver Justin Jefferson. The Pro Bowl cornerback and his teammates not only contained Jefferson but they also shut him down in a 41-17 win that kept the Packers playoffs hopes alive.

In this year’s season opener, Jefferson had a field day against the Packers. The former LSU star torched the Green Bay defense, catching nine passes for 184 yards and two touchdowns. He also had a 64-yard catch that did not go for a touchdown.

Before that game, Alexander wanted the chance to cover Jefferson as often as possible but defensive coordinator Joe Barry went with a more conservative approach. He played a zone defense which failed miserably when the Packers defensive backs and linebackers had multiple miscommunications when receivers ran through one zone to another. The failure to coordinate when and how to allow a teammate to take over coverage of a player as they passed through a zone allowed Jefferson to break off big gains time and time again.

In Week 1, Alexander lineup up opposite Jefferson just 12 times out of 33 pass patterns the receiver ran in that game. Pro Football Focus said that none of the nine catches Jefferson made came when he was being covered by Alexander.

The Packers were hardly alone in struggling to stop Jefferson this season. He led the entire NFL before Sunday’s game at Lambeau Field with 123 catches and 1,756 yards. He was averaging nearly 111 yards per game as a receiver and earned Pro Bowl honors for the third straight season.

But in the rematch, the Packers took a different approach. Barry showed he could adjust and changed his focus. He allowed Alexander to choose to match himself up against Jefferson, a challenge the Packers top defensive back welcomed.

This has been an up and down season for Alexander. The Packers made the former Louisville star the NFL’s top paid cornerback during this past offseason when they signed him to a new contract. Unfortunately, Alexander had an inconsistent season, playing well at times but being beaten badly by receivers at others.

But the Packers star cornerback never lacked confidence and the gamesmanship with Jefferson started well before Sunday. He called the big game Jefferson had against the Packers in Week 1 “a fluke” which was certainly designed to get inside the receiver’s head.

“Just all the yards he had, that’s what I was calling a fluke,” Alexander explained after Sunday’s win over the Vikings. “He was catching passes when there wasn’t nobody even on him. Like, yeah, OK, good job.”

In the rematch, Alexander lined up against Jefferson 20 times out of the 31 pass patterns the receiver ran. Alexander was physical whenever possible, bumping Jefferson at the line. In the game, Vikings quarterback Kirk Cousins targeted Jefferson five times but he caught only one pass all game for 15 yards and Alexander was not covering Jefferson on that play.

Alexander was in Jefferson’s face and got inside his head. When he broke up a pass intended for Jefferson near the sideline in the first half, Alexander imitated the dance the receiver likes to do after he scores a touchdown.

Jefferson knew exactly what Alexander was doing but he couldn’t overcome it. “He does stuff like that to try get in my head and stuff like that,” Jefferson admitted after the game. “It is what it is. Even from his comments leading into this game, it’s just talk. It’s just trying to give him that booster, that confidence, to go out there and guard me.”

Packers head coach Matt LaFleur was pleased with Alexander’s performance and that of the entire defense. “There were a couple times he implemented some quick jams where he was very physical at the line of scrimmage,” LaFleur said. “I thought, anytime DBs do that, you’re not always expecting it, especially if you haven’t seen it a ton on tape, and that’s always a challenge. I don’t care who you are as a wide receiver, it’s always a challenge. I thought that was a great job by our staff, a great job by Ja and really all other 10 guys on the field to be able to do their job off of whatever call was being made.”

The combination of Barry’s change in approach, a consistent pass rush that took advantage of injuries along the Vikings offensive line and the great execution by Alexander and the rest of the Packers secondary, the defense shut down Jefferson and prevented the Vikings from scoring a touchdown until they trailed 41-3 early in the fourth quarter.

At the end of the day, LaFleur summed it up best when he said, “I know Jaire chirped a little bit but he backed it up.”

And now the Packers have a chance to clinch a playoff berth with a win in their season finale Sunday against the Lions. That means a chance to overcome the struggles the team had all season due to a strong finish.

How the Davante Adams Trade Changes Things for the Packers