The Green Bay Packers return home to host the Cleveland Browns on a Christmas Day afternoon game at Lambeau Field. The Packers defeated the Baltimore Ravens 31-30 last week to improve to 11-3 on the season. The victory clinched a third straight NFC North title and guaranteed the Packers at least one home playoff game this season. The Browns lost to the Las Vegas Raiders 16-14 on Monday in a game that was postponed because of Covid. Cleveland was missing many key players who were in Covid protocols including their top two quarterbacks. They are now 7-7 on the season.

Here is a look at six key factors that will determine who wins Saturday’s game in Green Bay:

The Browns are a below-average passing team but their rushing attack presently ranks 5th in the league and is gaining 139.6-yards per game.

Cleveland features a talented pair of running backs in Nick Chubb and Kareem Hunt. Chubb is already over 1,000 yards for the season despite playing in just 11 games. He has seven rushing touchdowns and is averaging an impressive 5.4-yards per rush.

Hunt is a speedy, change-of-pace back who is averaging 4.9-yards per carry but he is not expected to play against the Packers because of an ankle injury.

Look for a lot of runs by Chubb as the Browns try to keep the Packers offense off the field and limit the number of chances Aaron Rodgers will have to move the football.

The Packers hope to have Kenny Clark, their best defensive lineman, back for this game. Clark missed the Ravens game a week ago because he was in the Covid protocols. His absence was felt against the run as none of the Packers other defensive linemen can get the penetration that Clark can get on a consistent basis.

The Browns will be without center J.C. Tretter who tested positive for Covid on Thursday. If Clark can play, he should have a big edge over backup center Nick Harris. This matchup will be an important one and will go a long way towards determining who controls the middle of the line of scrimmage.

Cleveland’s pass defense in solid, in fact, they are ranked 8th in the league with just 216.1-yards allowed per game. But they are also likely to be missing several key players on Saturday and the Packers need to take advantage of that.

The Packers will likely be without Marquez Valdes-Scantling who was just placed in Covid-19 protocols this week and Randall Cobb who is still out with an injury. But Davante Adams and Allen Lazard should be able to get open against Cleveland’s banged up secondary.

The Packers also hope to get Equanimeous St. Brown back after he suffered a concussion two weeks ago. That would add to the depth in the Green Bay receiving corps for this week’s game and give Rodgers some open receivers to keep the chains moving.

The Packers got the job done on the ground last week despite not putting up spectacular numbers and having a long run of only 11 yards. Green Bay ran 25 times for 96 yards, but it was enough to keep the chains moving and keep the Ravens defense from teeing off on Rodgers and getting pressure on him.

The Packers rushing duo of Aaron Jones and A.J. Dillon have contrasting styles with Jones being the faster, outside threat and Dillon being the physical, between-the-tackles runner, but both are effective and can make plays on the ground.

The weather for Saturday is expected to be cloudy and in the low 30s at game time. The Packers will need to run the ball enough to provide balance and keep the Browns defense honest.

Head coach Matt LaFleur cannot abandon the run too quickly and needs to keep it in the team’s game plan for the offense to maximize its potential.

The Packers offensive line has been decimated by injuries and rookie right guard Royce Newman is the only opening day starter in the lineup at his original position. The Packers are still without David Bakhtiari, Elgton Jenkins, Josh Myers and Billy Turner. Bakhtiari did not practice Tuesday or Wednesday and is unlikely to return against Cleveland this week.

The Browns are sixth in the NFL with 37 sacks so far this season and have several quality pass rushers on their roster led by Myles Garrett and Jadeveon Clowney. However, Clowney was placed on the Covid-19 reserve list on Monday and missed last week’s game against Las Vegas. It is not yet clear is Clowney will be ready to return in time for Saturday’s game.

Garrett has a groin injury and did not practice Tuesday or Wednesday. His status for Saturday’s game remains in doubt.

If healthy, Garrett would create big matchup troubles for either Yosh Nijman or Dennis Kelly but a bad groin makes changing direction harder and can compromise his speed.

Regardless of who plays, the Packers need to give Rodgers enough time to throw the football. Look for more quick release passes and for the Packers tight ends and running backs to help in pass protection against Cleveland.

Whether or not Mayfield returns to the lineup Saturday, the Packers need to get some pressure on the Cleveland quarterback.

The Browns have allowed 33 sacks this season and the Packers need to be able to get after Mayfield to force him into mistakes and get him off his rhythm. Mayfield has been inconsistent all season and if the Packers can make him struggle again, they stand a very good chance of winning the football game.

Getting Kenny Clark back can help the Pack get pressure up the middle. Preston Smith and Rashan Gary are the keys to the edge rush. If Mayfield feels the pressure, the Browns passing attack will be inconsistent.

Last week, the Packers special teams were better than they had been in recent games but were still unacceptably awful. Foolish penalties and sloppy play have been the norm for Green Bay’s special teams this season and that must change.

If the special teams don’t hurt the Packers by giving the Browns some key turnovers or very favorable field position, the Packers will make it tough for Cleveland’s offense to move down the field on long, mistake-free drives.

With three games left, this is the one the Packers can most afford to lose since it is against an AFC opponent and that would not hurt Green Bay in tie-breakers for the top seed in the NFC race.

The Packers are a better and more consistent team on paper than the Browns and the Pack is at home. Still, Cleveland needs this game as they are still in the thick of the AFC North and AFC Wild Card hunts and the Browns will be pulling out all the stops.

If the Packers can slow down Chubb and don’t lose the turnover battle badly, they should win this game and make it a Merry Christmas for Packers fans. 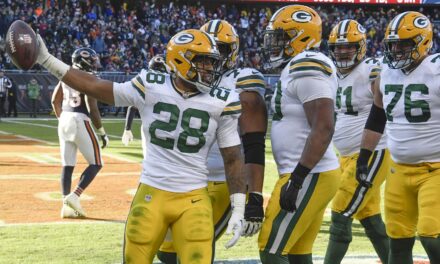