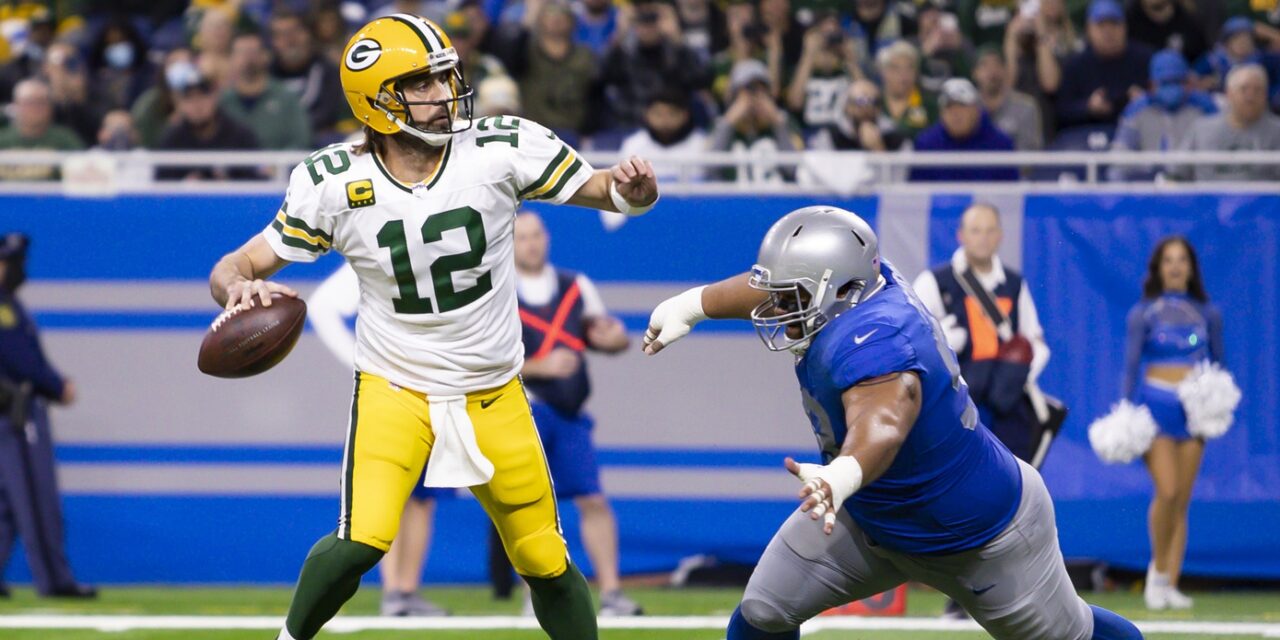 The Green Bay Packers conclude their three-game road trip when they visit Motown to face the Detroit Lions in an NFC North Division rivalry. The Lions are 1-6 and have lost their last five games. They have a defense that is widely regarded as the weakest in the league.

Here is a look at six key factors that will determine who wins Sunday’s game in Detroit:

The Lions starting running back, D’Andre Swift, has missed three games due to injuries and did not practice early this week. On Thursday, he was a limited participant in practice. He is probably a week away from returning to the lineup and if he does play Sunday, he’s likely to be on a play count. Swift is averaging 7.4-yards per carry and could potentially have a field day against the struggling Packers run defense.

If Swift is unavailable, former Packers runner Jamaal Williams will continue as the top back. Williams would love to have a big game against his former team. He is a dedicated, between-the-tackles runner who is an effective receiver out of the backfield.

The Packers defense will have to do a better job at the point of attack and at keeping contain on the edges. With De’Vondre Campbell’s status uncertain as he tries to return from a knee injury, the Packers will need better performances from Quay Walker, Kenny Clark and players like Rashan Gary who will need to prevent big plays on the outside.

Stylistically, the Packers are more vulnerable to Swift’s skill set than Williams’. If the Packers can’t stop the run, the game will likely be very competitive.

Amon-Ra St. Brown is the brother of former Packers WR Equanimeous St. Brown. The second-year man out of USC quickly became the Lions most reliable receiver especially after the Lions traded tight end T.J. Hockenson at the trade deadline.

St. Brown is not a big deep threat but he runs consistently strong patterns and has good hands. His catch percentage this season is 70 percent. If the Packers play a soft zone and don’t press him at the line of scrimmage, he will pick them apart with 8-12 yard patterns that will keep the sticks moving.

It is doubtful the Packers will match Jaire Alexander against St. Brown, but they must not let him consistently get open on short to intermediate patterns that will help the Lions keep drives alive.

The Lions defense is statistically the worst in the NFL. They are allowing 266.4-yards passing per game and are dead last in points allowed per game.

Will rookie receivers like Romeo Doubs, Samori Toure and possibly Christian Watson be able to make plays against a struggling Detroit secondary? Can veterans like Allen Lazard and Sammy Watkins be productive? If the answer is no, it would reflect very poorly on the Packers offense.

Aaron Rodgers should be able to pass effectively and find a variety of receivers open on Sunday.

This is a big opportunity for the Green Bay offense to have a productive passing game and to gain some confidence for the rest of the season.

The Packers offensive line remains a major question mark. The health of David Bakhtiari and Elgton Jenkins, the team’s two best linemen, is a week-to-week issue and each of them missed one of the last two games.

When they don’t play, the team has problems since Royce Newman has played poorly and Zach Tom has had to switch positions and makes typical rookie errors at times.

The Lions pass rush has been weak and they have only 11 sacks as a team in seven games. Rookie first-round pick Aidan Hutchinson has 4.5 sacks to lead the team. The Packers hope Bakhtiari will be available to help keep Hutchinson in check.

If Rodgers has time to throw, he should be able to pick apart the vulnerable Detroit secondary but the Packers banged up offensive line must get the job done.

The Packers ran the ball effectively last week against the league’s top run defense but it only resulted in 17 points.

The Lions are 30th in the league in rushing yards allowed per game with teams gaining an average of 154.9-yards per game against them.

Aaron Jones and A.J. Dillon should both have strong games against the Lions. The Packers need to run the ball often enough and effectively enough to stay out of third and long situations and to set up opportunities for the passing game.

If the Packers can control the clock, they have a chance to win this game comfortably.

The Lions offense is capable of putting up points and they are 9th in the league in points per game. One way to slow down the offense is to get pressure on Detroit quarterback Jared Goff.

Goff is not a major running threat like Josh Allen or Justin Fields but he can get away from pressure and buy some time to throw downfield.

The Lions have allowed 13 sacks in seven games. The Packers defense has been getting consistent pressure on opposing quarterbacks but not getting a lot of sacks. They have 17 sacks which ranks them 18th in the league.

Gary leads the way with six sacks although he’s been slowed a bit by injuries the past two weeks and has been getting to the passer less consistently. Preston Smith has 3.5 sacks while rookie Kingsley Enagbare has been showing more pass rush ability recently and now has two sacks.

Getting pressure on Goff and getting him off his game would help slow the Detroit attack.

It’s an understatement to say this is a must-win game for the Packers if they hope to squeak into the playoffs this year. A loss to a 1-6 team and a division rival no less would be the end of the team’s playoff hopes.

The Packers have trouble putting up points while the Lions can’t stop anybody. If Rodgers can’t get the offense to be productive against Detroit, who can he be successful against?

The Packers defense needs to at least slow down a potent Lions offense. A few turnovers would help as would reducing the penalties that hurt the Pack during their current losing streak.

Look for the offense to have their best game of the season. This won’t be an easy win but the Packers should have enough to end the losing streak.