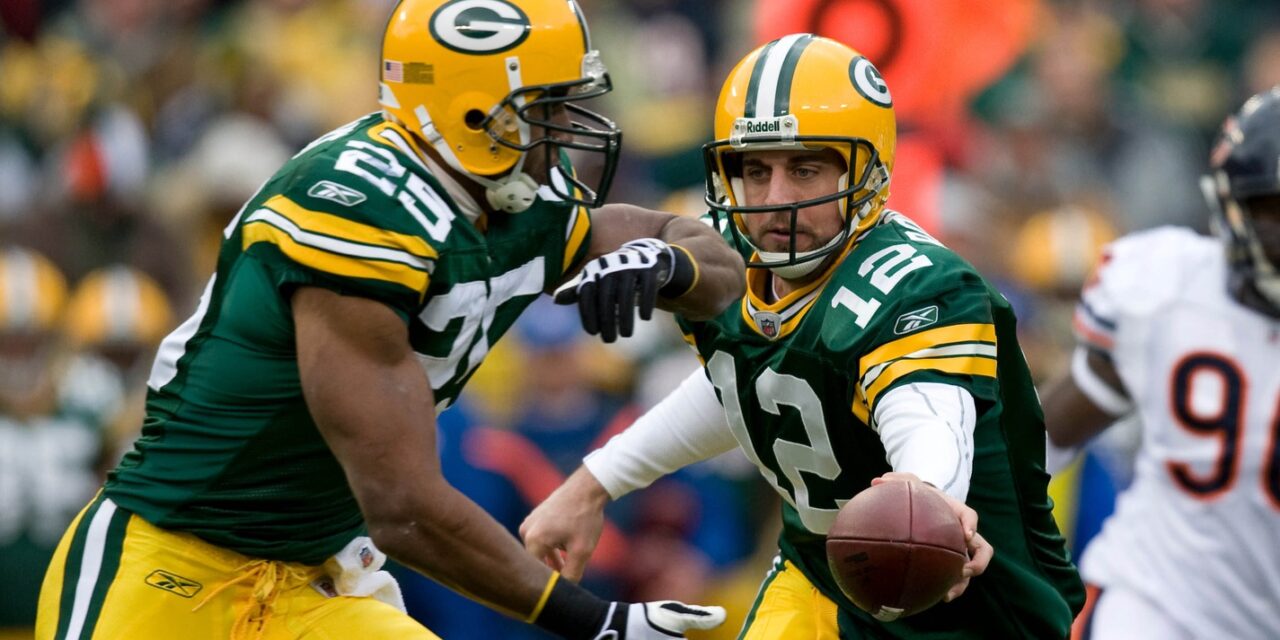 Green Bay Packers quarterback Aaron Rodgers has owned the Bears throughout his career. The future Hall of Famer has an incredible 23-5 record when starting against the Bears and he’s thrown 63 touchdowns against just 10 interceptions.

The dominance started early as in his very first start against Chicago, Rodgers led the Packers to a 37-3 route over the Bears at Lambeau Field in Week 11 of the 2008 season, his first as a starter.

For the game, Rodgers completed 23-of-30 passes for 227 yards and two touchdowns. He completed his first seven passes of the game and never looked back.

Running back Ryan Grant also had a big day, gaining 145 yards on 25 carries and running for a score as the Pack gouged the once vaunted Chicago defense for 200 rushing yards in the game and held onto the ball for 37:28 to just 22:32 for the Bears.

“I have felt better and better,” Grant said after the game. “This is the best I’ve felt all season, so I do feel like I’m getting in a groove. We need to keep it going.”

The Packers defense was also outstanding, holding Chicago to just nine first downs and 234 total yards all game. Chicago had only 83 rushing yards and their long run of the game was only 10 yards.

The defense had just made an important move before the game. With middle linebacker Nick Barnett lost for the season with a knee injury, the Packers moved A.J. Hawk from outside linebacker to the middle and had him calling the defensive signals.

“When you lose a guy like Nick, that’s huge, that hurts your team, that hurts your defense,” Hawk said. “We knew that if we wanted to pick up the slack of what we were losing with him, we had to step it up a notch. I think the whole defense did that.”

The Packers offense got moving on their second drive of the game, an 8-play, 73-yard march that included three passes to Donald Driver good for 39 yards. Rodgers capped the drive with a three-yard scoring pass to Greg Jennings and the Packers led 7-0.

The Bears responded with their only scoring drive of the day which culminated in a 35-yard field goal by Robbie Gould to make it a 7-3 game, but the Packers defense stifled Chicago starter Kyle Orton after that, holding him to just 13 completions in 26 attempts for just 133 yards.

The Packers responded with two more scores before halftime, a four-yard run by Grant followed by a 53-yard field goal by Mason Crosby that gave the Packers a 17-3 halftime lead and tied Crosby’s career long for successful field goals.

In the second half, the Packers continued to pour it on, as Rodgers found tight end Donald Lee for a five-yard scoring pass to add the only points of the third quarter.

In the fourth, Packers linebacker James Hunter ran back a fumble 53 yards for his first career touchdown and Crosby added a pair of field goals to make the final margin 37-3.

“It feels great,” Hunter said. “I was thinking about that today: ‘I would sure love to score a touchdown.’ It’s just a dream come true. … It’s something I’m always going to remember. I’m going to cherish this.”

The linebacker managed to do a successful Lambeau Leap although his teammates didn’t give him high grades. “I dove all the way into the crowd. The guys gave me a hard time about it. But it was fun.”

Rodgers was quick to credit his offensive line which opened huge holes for Grant and didn’t allow him to be sacked all game.

“I didn’t hit the ground once,” Rodgers exclaimed. “I barely got touched. No sacks, no quarterback hits, only a couple of hurries. When the guys up front are protecting you like that, you can stand in there and throw the ball with confidence.”

The win improved the Packers record to 5-5 on the season and put them in a three-way tie with the Bears and Vikings in the NFC North.

The Packers were thrilled by their dominant performance. “This game defined us in terms of where we want to go,” Grant told reporters. “We wanted to pound the ball, execute and be physical, and we were able to do that. We took the approach that it was a must-win game.”

The Bears were demoralized. After the game, the Packers found a hole in the wall about the size of a fist in the visitors locker room.

“We got our asses kicked, that’s what happened,” linebacker Brian Urlacher said. “They ran it, they threw it, they did whatever they wanted to do.”

It was a great performance for Rodgers in his first game against the Bears and it set the tone for the next 15 years of dominance by the Packers quarterback.